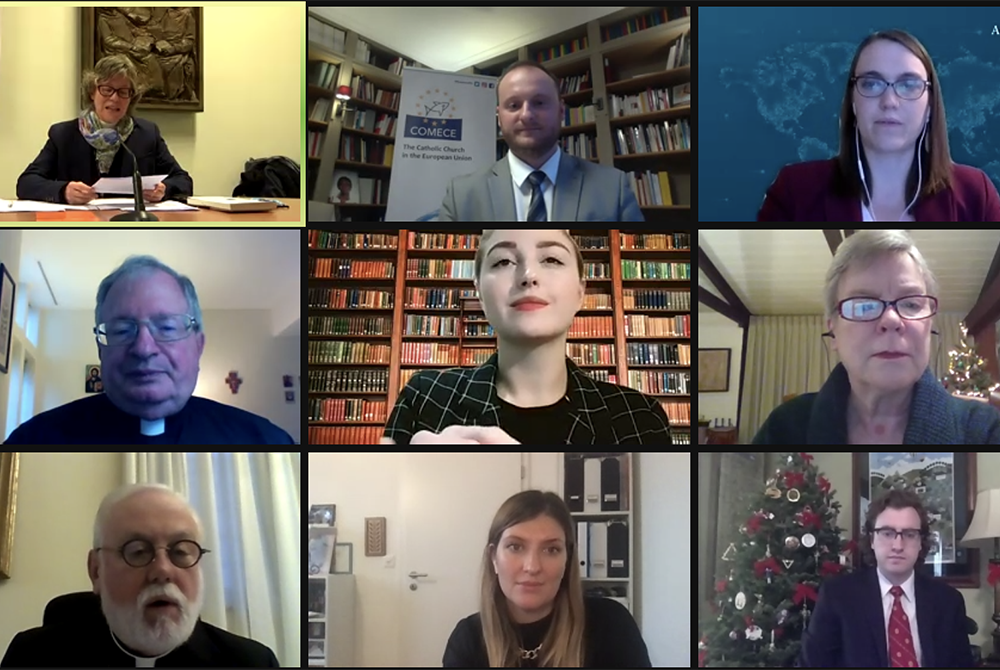 Participants at the Vatican's Dec. 16 webinar on nuclear disarmament are seen in this screenshot. (NCR screenshot/YouTube/Vatican News)

The Vatican's foreign minister reaffirmed the Catholic Church's recent shift away from accepting the Cold War-era global system of nuclear deterrence Dec. 16, telling a webinar featuring arms control activists that nuclear weapons only give "a false sense of security."

"International peace and security cannot be founded on the threat of mutual destruction or total annihilation, or maintaining a balance of power," Archbishop Paul Gallagher told the webinar, which was co-hosted by the Vatican and several institutes at Georgetown University and the University of Notre Dame.

"Peace and security must be built on justice, integral human development, [and] respect for fundamental human rights," said Gallagher. "From this perspective, it is necessary to go beyond nuclear deterrence."

The webinar, livestreamed on the Vatican's YouTube channel, was meant to mark the third anniversary of a landmark November 2017 Vatican symposium at which Pope Francis changed the Catholic Church's position on nuclear deterrence.

Developing the teaching of previous pontiffs, who had granted conditional moral acceptance to the system of deterrence as a way of preventing any world power from using nuclear arms, Francis told the 2017 event that even the possession of nuclear weapons is to be "firmly condemned."

Francis' changing of the church's teaching on deterrence came shortly after the Vatican joined the U.N.'s 2017 Treaty on the Prohibition of Nuclear Weapons. The treaty, which prevents signatories from developing, producing, stockpiling or testing nuclear arms, is set to go into force on Jan. 22.

The United States has not taken part in the treaty, which has been signed by 86 countries and ratified by 51 of those.

Cardinal Peter Turkson, whose Dicastery for Promoting Integral Human Development had coordinated the 2017 Vatican event, told the Dec. 16 webinar that maintaining nuclear stockpiles "wastes precious resources" that could be used to feed the world's population or towards social welfare campaigns.

Turkson quoted U.S. President Dwight Eisenhower's 1953 speech highlighting the cost of the Soviet-U.S. arms race: "Every gun that is made, every warship launched, every rocket fired signifies, in the final sense, a theft from those who hunger and are not fed."

Among others joining the webinar was Beatrice Fihn, the executive director of the International Campaign to Abolish Nuclear Weapons, the organization that helped bring about the new nuclear ban treaty and was the recipient of the 2017 Nobel Peace Prize.

Fihn said that nuclear deterrence is "becoming increasingly stigmatized as a security policy."

"Any state that supports nuclear weapons … lends credibility to this dangerous notion that it is acceptable and legal to mass-murder civilians," she said.

Also taking part in the event was Rose Gottemoeller, a former deputy secretary general of NATO and former State Department official who is now a lecturer at Stanford University.

"While nuclear weapons continue to exist, we must ensure that they remain safe and secure, lest they fall into the wrong hands and become the tools of nuclear terrorists or madmen," said Gottemoeller.

"The nuclear weapons states also care about ensuring that the weapons are effective, for if the dreadful day ever arrives when they had to be used, they must be ready," she added.

Gallagher was asked during the event if the Vatican planned to give direction to national bishops' conferences about how to speak about the "moral unacceptability of nuclear weapons" following the entry into force of the nuclear ban treaty.

"There's no formal intention at this stage of so doing," said the archbishop. "I think that the bishops' conferences are very aware of the position of the Holy See and what the Holy Father has said about this."

"We, generally speaking … like to leave such initiatives up to the discretion of local bishops' conferences because the response is different, obviously, in almost every country depending on policies of governments," said Gallagher.

"I don't think a decree will go out from Caesar Augustus in this respect," the archbishop quipped.

A version of this story appeared in the Jan 8-21, 2021 print issue under the headline: Vatican foreign minister reaffirms condemnation of nuclear deterrence.