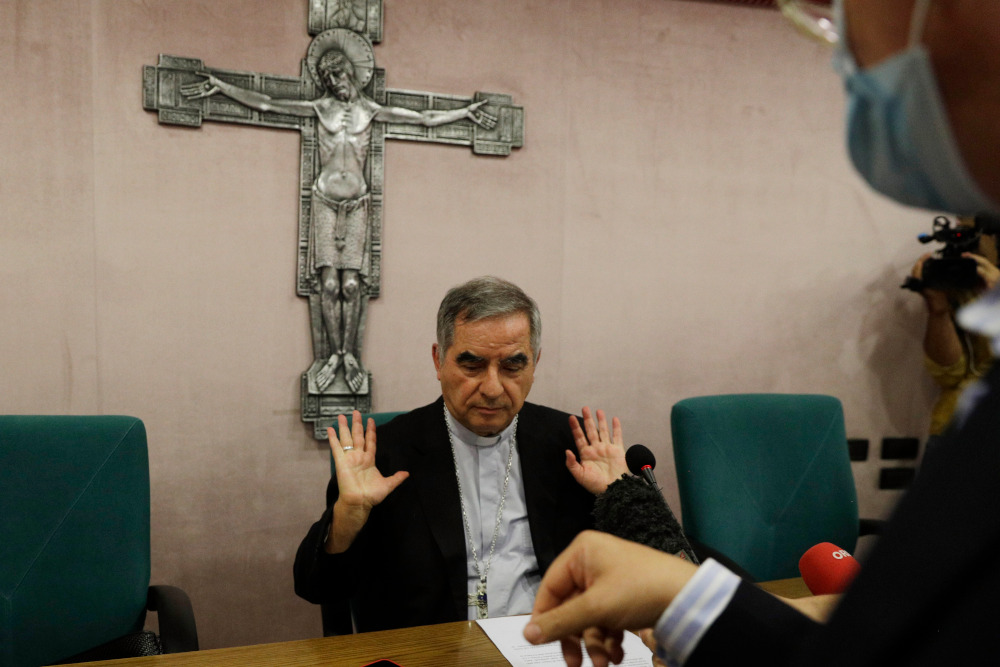 In this Sept. 25, 2020 Cardinal Angelo Becciu talks to journalists during a press conference in Rome. Italy’s financial police said Wednesday, Oct. 14, 2020 that a Sardinian woman, Cecilia Marogna, said to be close to one of the Holy See’s most powerful cardinals, Becciu, before his downfall, was arrested in Milan, northern Italy, late Oct. 13 on an international warrant issued by the Vatican City State. (AP File/Gregorio Borgia)

The Vatican's swirling corruption investigation has taken a mysterious new twist with the arrest on an international warrant of a Sardinian woman said to be close to one of the Holy See's most powerful cardinals before his downfall.

Italy's financial police said Oct. 14 that Cecilia Marogna had been arrested in Milan late Oct. 13 on a warrant issued by the Vatican City State. An official of the Guardia di Finanza, speaking on condition of anonymity, said the agency had no further information since officers merely executed the warrant on behalf of a foreign country, the Vatican.

Italian newspapers in recent weeks have reported that Cardinal Angelo Becciu, the onetime No. 2 in the Vatican secretariat of state, had wired hundreds of thousands of euros in Holy See funds to Marogna's Slovenian-based consulting firm, purportedly for humanitarian operations in Africa and Asia.

The reports, including interviews with Marogna herself, have identified the 39-year-old as a political analyst and intelligence expert who reached out to Becciu in 2015 with concerns about security for Vatican embassies in hot spots and was quickly brought into the cardinal's inner circle.

Marogna told Corriere della Sera that over four years, Becciu wired her 500,000 euros as compensation, travel reimbursements and consultancy fees. She defended some luxury expenditures — designer pocketbooks for example — as being "maybe for the wife of a Nigerian friend who was in a position to talk to the president of Burkina Faso."

Becciu, who was sacked by Pope Francis last month after admitting he sent 100,000 euros in Vatican money to a charity headed by his brother, has insisted that his dealings with Marogna were legitimate.

In an Oct. 7 statement issued by his lawyer, Becciu said "the contacts with Cecilia Marogna strictly pertains to institutional affairs."

Marogna's arrest was believed to be part of a sprawling corruption investigation launched last year by Vatican prosecutors into the Holy See's 350-million-euro investment into a London real estate venture, much of it funded by donations from the faithful.

Vatican prosecutors are investigating a handful of Italian middlemen who are accused of having fleeced the Holy See of tens of millions of euros in fees while the Vatican's incompetent money managers stood by.

Vatican prosecutors haven't indicted anyone yet, and their case seems rife with holes and potential conflicts, given the Holy See's superiors approved the contracts with the middlemen that ceded them voting rights in the deal and provided them with huge management fees.

To that extent, it's not immediately clear what charges Marogna could face if she was merely on the receiving end of consulting fees approved by Becciu, who had been given broad discretionary authority to manage the secretariat of state's assets by none other than the secretary himself, Cardinal Pietro Parolin.

Becciu was the "substitute" in the secretariat of state from 2011-2018, during which time at the original real estate investment was made. But his replacement and the current No. 2 actually signed off on the last phase of the deal that has cost the Vatican so much money.

Neither Becciu nor his replacement have been formally identified as suspects in the case, though when Francis fired Becciu last month, he also revoked his rights and privileges as a cardinal, meaning he could eventually be judged by Vatican magistrates.

Becciu, who like Marogna is from Sardinia, has denied wrongdoing and defended the original investment as sound.

The Vatican criminal investigation has been unusual, in that it has been beset by leaks to the Italian media, which have largely reported positively on the progress of the probe and Francis' financial cleanup efforts. Last week, for example, an Italian investigative television program featured Vatican documents detailing Vatican wire transfers to Marogna's firm and her expenditures at high-end boutiques such as Poltrona Frau and Chanel.