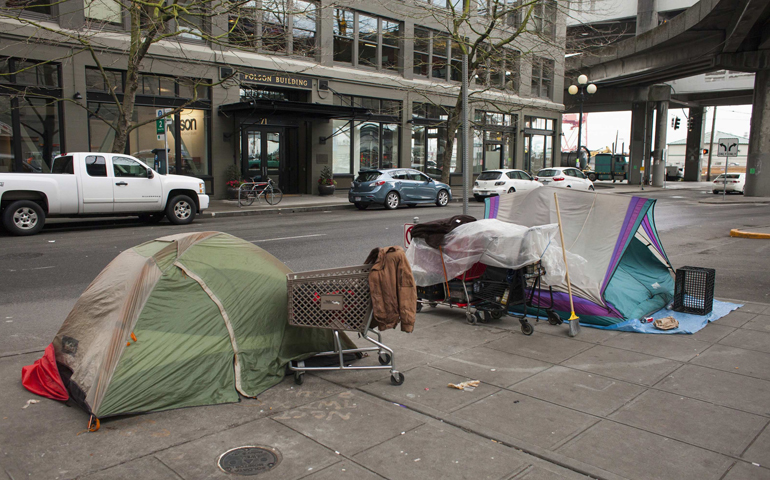 Declaring "the plight of those living in poverty" in Washington state "is reaching crisis proportions," the state's bishops have issued a pastoral letter exhorting "people of good faith" and "political leaders" to embrace "the urgent need for action" on housing, health care, nutrition, education and employment for the marginalized.

The bishops — Bishop Joseph Tyson of Yakima, Archbishop Peter Sartain and Auxiliary Bishop Eusebio Elizondo of Seattle, and Bishop Thomas Daly of Spokane — based their narrative in large part on listening sessions held around the state during the past year with people who shared their experiences of poverty and isolation.

"We heard in the voices of people who are poor both a plea for mercy and a desire to participate fully in the life of their communities," the bishops write in their 2,000-plus word letter, "Who Is My Neighbor?: The Face of Poverty in Washington State."*

Released Nov. 17, the document emphasizes that the dignity of human life, the common good and solidarity are "more than mere words and phrases."

Poverty is "more than an issue to be discussed or a problem to be solved. Poverty has a human face," the bishops state. "When we stop and look into the face of poverty, we recognize that 'the poor' are not strangers. They are our sisters and brothers, members of our human family."

The pastoral letter uses specific examples of three women and two men who spoke at the listening sessions:

The bishops said, "Our listening sessions convinced us that the plight of those living in poverty in our state is reaching crisis proportions. At the same time, we grew in awareness that providing just a little help can make a big difference. We spoke to many people whose primary obstacle to lifting themselves out of poverty was the lack of secure housing."

They acknowledged that the state offers programs that "reduce poverty, alleviate suffering and ensure basic human rights for those living in poverty." But, they added, "It is unfortunately true, however, that when revenue collections fall short, these essential lifelines are among the first to be reduced or eliminated."

"Some things are best addressed by individuals, families, churches and charities; but when problems such as homelessness, hunger, drug addiction and mental illness are common to every community, it is a just and reasonable expectation that society will act cooperatively to address these problems," the bishops write.

The letter urges Catholics to advocate "on behalf of those who lack the basic rights of food and shelter, access to health care, a living wage and education."

Study materials related to the pastoral letter are available on the Washington State Catholic Conference website.

A spokesman for the Yakima diocese told NCR on Nov. 29 that a Spanish translation of the letter "should be available this week."

He added, "We posted the letter on our website and Bishop Tyson's Facebook page, and e-mailed it to the pastors, and then later also e-mailed the study guide, with memos encouraging distribution in the parishes, and also organization of study groups during Lent. We want to give the pastors some lead time in hopes that all the parishes will organize something for their people."

In the Seattle archdiocese, both the letter and study materials were distributed to Catholic community services, schools and parish ministers in addition to all priests and pastoral leaders, a spokesman said.

*An earlier version of this article misstated the document's name.

Who Is My Neighbor? The Face of Poverty in Washington State by National Catholic Reporter on Scribd