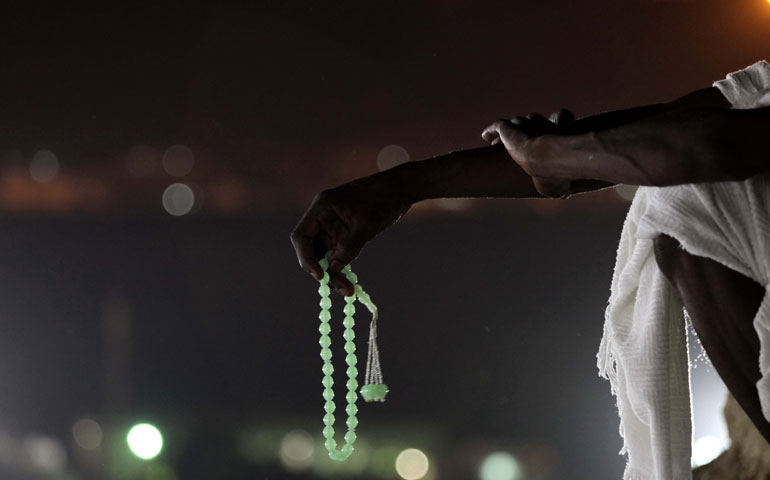 Muslim pilgrims pray atop Mount Mercy on the plains of Arafat Oct. 3, 2014, during the annual Hajj pilgrimage, near the holy city of Mecca, Saudi Arabia. (Newscom/APAImages/Polaris/Ashraf Amra)

Dec. 8 marks the opening of the Jubilee of Mercy, a yearlong celebration of God's compassion. Pope Francis, who has made mercy the motto of his papacy, hopes that this year will be "a true moment of encounter with the mercy of God." One way Catholics can become better acquainted with this divine mercy is by more deliberately encountering another religion that takes God's mercy as its central focus: Islam.

Faced with news media images of violence and black flags in the Middle East, the last thing many Catholics might associate with Islam is mercy. Aside from knowing about Muslims' frequent prayer and Ramadan fast, most are unaware of Muslim religious practices, let alone their beliefs about God. But written at the beginning of every chapter of the Quran but one, and recited by Muslims at the start of every meal, prayer and task, is the invocation Bismillah al-Rahman al-Rahim, which can be translated "In the name of God, the Entirely Merciful, the Especially Merciful."

In his papal bull announcing the jubilee, Francis referenced both Islam's and Judaism's emphases on God's mercy, writing, "There is an aspect of mercy that goes beyond the confines of the Church." He urged Catholics to use the Year of Mercy as an opportunity to learn about Islam and other religions to "eliminate every form of close-mindedness and disrespect ... violence and discrimination."

As Francis has described in homilies throughout his papacy, God's mercy isn't simply pity or forgiveness after we've done wrong. Rather, mercy is God's overarching disposition toward creation, a parental love that extends to all. This is also true in Islam.

Muslims don't refer to God as "Father," but the parent-like nature of God in Islam becomes clear when we examine the Arabic roots of the word for mercy: rahmah. This word -- and the names for God al-Rahman (the Entirely Merciful) and al-Rahim (the Especially Merciful) -- comes from rahm, the Arabic word for a mother's womb. The Prophet Muhammad compared God's rahmah to that of a nurturing mother.

In the Quran, God identifies rahmah -- which Muslims also translate into English as graciousness, compassion and loving kindness -- as his chief attribute, and says that the name al-Rahman is but a synonym of Allah, the Arabic word for God. In a famous hadith, or saying of the prophet, Muhammad tells his followers that God has more mercy toward his servants than a mother does toward her child.

For both Christians and Muslims, God's mercy is also characterized by infinite patience and a constant reaching out to wayward humanity.

Francis frequently cites Jesus' parable of the prodigal son, or what the pope calls the story of the "merciful father." In the parable, a young man runs away from his family, abandoning his elderly father and living a life of selfishness. After he squanders his money, he returns ashamed to his family home.

As the Bible tells it, "While [the son] was still a long way off, his father caught sight of him, and was filled with compassion. He ran to his son, embraced him and kissed him."

An oft-cited saying of Muhammad echoes this picture of God. He said, "God says: When a servant of mine draws nearer to me by the length of a hand, I draw toward him an arm's length; and when he draws near to me an arm's length, I draw near to him the distance of a wingspan; and if he comes to me walking, I go to him running."

The motherly quality of God's mercy in Islam also speaks to God's creation and sustaining of the universe. All things have been created by God, who, as the spiritual master Ibn Arabi put it, "mercified" the universe into being.

God's infinite compassion (Quran 7:156) embraces the whole world (as a mother's womb), and his attributes are partially made manifest in his creatures, particularly humans.

This universal and constantly flowing mercy of God is also paired with what scholars of Islam have called God's particular or secondary mercy, which is bestowed in response to humans' efforts to live as God wants. This special mercy (ultimately achieved in salvation at the end of life) is not guaranteed, since humans are free to turn away from God's universal care.

Still, like a patient parent, God constantly offers mercy, which, as Muhammad described, always "prevails over" his wrath.

Muslims also believe God's mercy was expressed through messengers who conveyed his revelation to humanity. These messengers include many figures that are familiar to Christians, such as Abraham, Moses, Jesus and Muhammad, of whom God says in the Quran, "We have not sent you [Muhammad] but as a mercy for the universe" (Quran 21:107).

For Muslims, Muhammad is the model of merciful living. They look to his example of rahmah toward animals, the elderly, his grandchildren and everyone he met as a blueprint for their own lives, striving to emulate his caring nature and to be a mercy to their own universe.

"CelebrateMercy," an online educational initiative started by American Muslims, strives to share the life and legacy of the Muhammad not just with Muslims but with those who have only countered negative stereotypes about Islam and its prophet.

In learning about the centrality of mercy in Islam, Catholics can become more cognizant of the emphasis of mercy in our own tradition, finding resonances to the Islamic notion in passages like this one, in Isaiah: "Can a mother forget her infant, be without tenderness for the child of her womb? Even should she forget, I will never forget you."

This Year of Mercy is a time for Catholics to re-encounter God's rahmah through our own Scriptures and tradition, but also through the religion of our Muslim brothers and sisters. What we will discover is that, even with our doctrinal differences, Muslims and Christians share a core belief in a God who approaches all of creation with the loving kindness of a parent.

Perhaps then, we'll find ourselves beginning each prayer, each task and each meal with an invocation of God's mercy on our lips.

[Jordan Denari is a research fellow at Georgetown University's Center for Muslim-Christian Understanding, where she works for the Bridge Initiative, a research project on Islamophobia.]

A version of this story appeared in the Dec 4-17, 2015 print issue under the headline: The Year of Mercy is a time to learn about Islam.