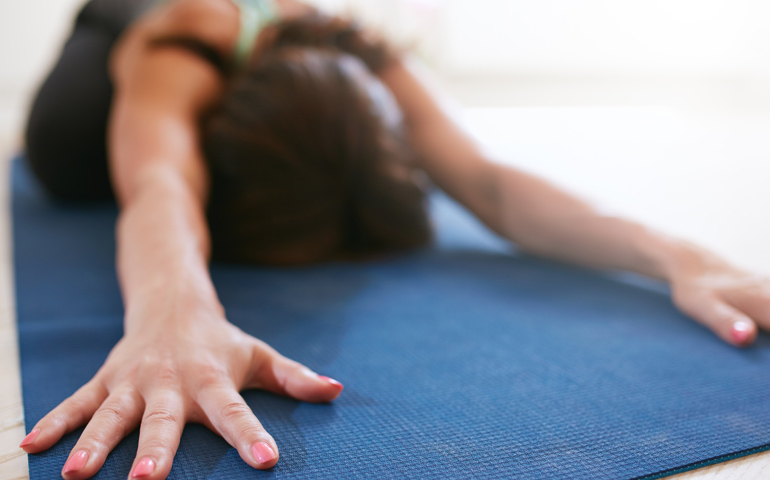 Earlier this spring, some Christians in Georgia protested a yoga class designed to help students at a public elementary school deal with stress. In response, the school district declined to drop the class but agreed to skip putting hands to the "heart center," using the word "namaste" or having the children color mandalas.

It wasn't the first time Christians -- usually evangelicals or more traditionalist Catholics -- have complained about the popular exercise that originated in Hinduism in India.

To be fair, the pope also noted that catechism classes weren't as powerful as the Holy Spirit. Still, to all these folks getting stressed about yoga, I say: "Take a deep breath in ... and out."

As someone who has practiced yoga for nearly two decades, I can tell you that it's actually made me a better Catholic.

In legal battles, the counterargument is that yoga is merely a bunch of stretching exercises, not a spiritual or religious practice. That's what happened in Encinitas, Calif., a few years ago when two courts eventually ruled that the exercises in the physical education classes were not spiritual and thus do not violate the separation of church and state.

It's true that for many -- including those doing the "tree pose" with 6-year-olds in gym class -- yoga is merely a physical exercise. That may also be the case for many adults who flock to yoga classes at gyms, seeing the stretching as a rotation in their running or weightlifting schedules. For those who focus merely on the physical practice, yoga is about strengthening core muscles, attaining balance or being able to put your foot behind your head.

But for real yogis, it's much more than that. In fact, the history of yoga is connected with Hinduism, and the postures and breathing are designed to facilitate meditation. It's about spiritual perfection, not perfect bodies. In meditation, we set aside our thoughts, some say "empty" our minds.

That worried Jeremy Butler of the Christian Apologetics & Research Ministry, who wrote in response to the Georgia controversy: "We are not to focus on ourselves or to clear our minds. The Bible never gives us a prescription to free our mind."

Instead, he argued, Christians should meditate only on God and God's word.

That's a pretty narrow definition of prayer. For me, anything that slows down my hectic life is a good thing -- and not just because it aids relaxation and de-stresses. Meditation is just another name for prayer.

In the quiet, God slips in. That's why so many religions have some sort of quiet, meditative prayer practice. For some Catholics, it's praying with the Blessed Sacrament. For others, it may be centering prayer. Still others find it on their yoga mats.

Yoga as part of a spiritual path shares other things in common with Christianity. The focus on the breath echoes language about the Holy Spirit. The repetition reminds me of the rosary. And its emphasis on regular practice sounds almost Sabbath-like.

Some have attempted to "Christianize" yoga -- but again that comes from a perspective that sees "regular" yoga as dangerous to their faith lives.

Nothing could be further from the truth. Clearly, the millions of yoga aficionados during the practice's most recent popularity craze have not converted to Hinduism. According to the Pew Religious Landscape Study, any increase in the number of Hindu adherents over the past decade has come primarily through immigration, not conversions. Only 10 percent of American Hindus are converts.

For some yoga practitioners who see it as a spiritual practice, yoga may replace traditional religious practice. They may already be "nones" who are unaffiliated with a denomination or religion. For me, as I do with any other religious practice from a tradition outside my own -- say, Jewish mourning practices or the Protestant practice of tithing -- I am able to incorporate what fits with my Catholicism, and leave the rest. Christians have been doing this for centuries.

Yet, I'd be lying if I didn't admit that there are some aspects of yoga as a prayer practice that especially resonate with me -- even more so than some Christian practices.

For example, the fact that yoga is nonhierarchal is appealing. The "teacher" in a typical yoga class is there to offer only suggestions, not dictate any individual's practice. While some "gurus" serve as spiritual guides, this is not common in the U.S. practice of yoga.

Finally, and obviously, yoga is about the body -- with which, sadly, some aspects of Christianity have had a bit of a hate-hate relationship throughout history. With yoga, I have come to accept and even celebrate my body, but at the same time not become too obsessed with or attached to it. I believe an incarnational God calls us to do the same, although the church has not always lived out that teaching.

Yoga is not a threat to my faith. It's been an asset to it -- and it can be for many Catholics and other Christians. Sure, downward dog will give your hamstrings a good stretch. But if you could stand to be stretched in the spiritual department, don't be afraid to sit in lotus, do some deep belly breathing and, yes, even chant, "Om."

[Heidi Schlumpf teaches communication at Aurora University outside Chicago. Her columns can be found at NCRonline.org/authors/heidi-schlumpf.]

A version of this story appeared in the May 6-19. 2016 print issue under the headline: Yoga makes me a better Catholic.