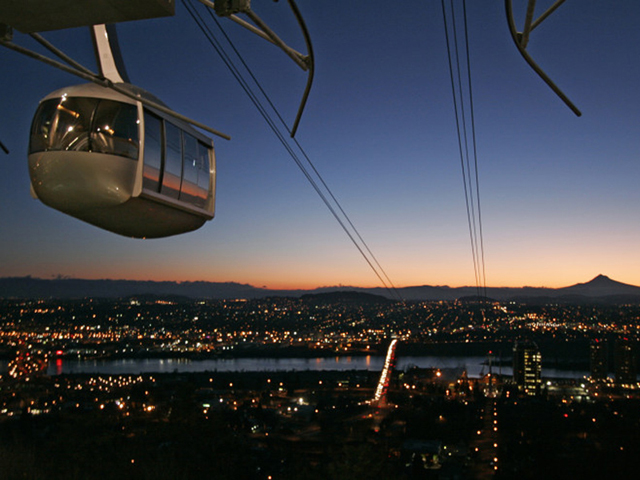 One of the two cars in the new aerial tram rises above Portland, Oregon, at sunrise. (Reuters/Richard Clement)

The United Methodist Church General Conference convenes once every four years to make policy decisions and set the direction for the denomination.

Beginning May 10, 864 delegates, half of them clergy, will converge on the Oregon Convention Center in Portland for 11 days for the General Conference. More than 40 percent of those delegates will come from outside the U.S.

Here are six of the most talked-about issues:

The United Methodist News Service tallied up more than 100 petitions alone on sexuality.

Several plans have been proposed to streamline all that legislation, including "The Simple Plan" supported by the Reconciling Ministries Network. That plan would change six paragraphs in the denomination's Book of Discipline that forbid clergy from marrying same-sex couples and regional conferences from ordaining LGBT clergy. The denomination's Book of Discipline calls the practice of homosexuality "incompatible with Christian teaching."

Seven petitions suggest changes to the wording of the Book of Discipline's paragraph on abortion. Several aim to strengthen language about preserving the life of a baby in the womb, while others encourage adoption and protection for health care professionals who do not want to participate in abortions as "a matter of conscience."

Another petition, submitted by five annual conferences, encourages the General Board of Church and Society and the United Methodist Women to withdraw their membership in the Religious Coalition for Reproductive Choice, which it calls a "one-sided political lobby that opposes all disapproval or limitation of abortion."

The General Board of Global Ministries has proposed a resolution calling on Methodists to "honor, respect, and advocate for religious freedom for all faith communities" and urging all governments to do the same.

At least three pieces of legislation address the needs of immigrants and refugees.

One would update figures in the Book of Disciple about the number of migrants who have died crossing the border between the U.S. and Mexico -- more than 3,860 between the years 1994 and 2009, it said. It also would direct churches to "welcome newly arriving immigrants into our congregations" and push a path to citizenship.

Yet another proposal would expand a section in the Book of Resolutions on Global Migration and the Quest for Justice.

And a new resolution titled "Housing for Persons on the Margins" would direct churches to work together to create housing for immigrants and refugees, among others.

Four resolutions prepared by the United Methodist Kairos Response ask the Methodist denomination to divest from Caterpillar, Motorola Solutions and Hewlett-Packard -- companies that profit from Israel's occupation of Palestinian lands -- and end any other investments that relate to illegal settlements. The church already opposes the occupation of the West Bank and East Jerusalem.

Kairos Response isn't the only group encouraging divestment; an advocacy group called Fossil Free UMC is calling on the church to divest from fossil fuel companies as well.

A new resolution calls on Methodists not only to support those who have been affected by gun violence in their communities, but also to advocate for laws meant to prevent or reduce gun violence.