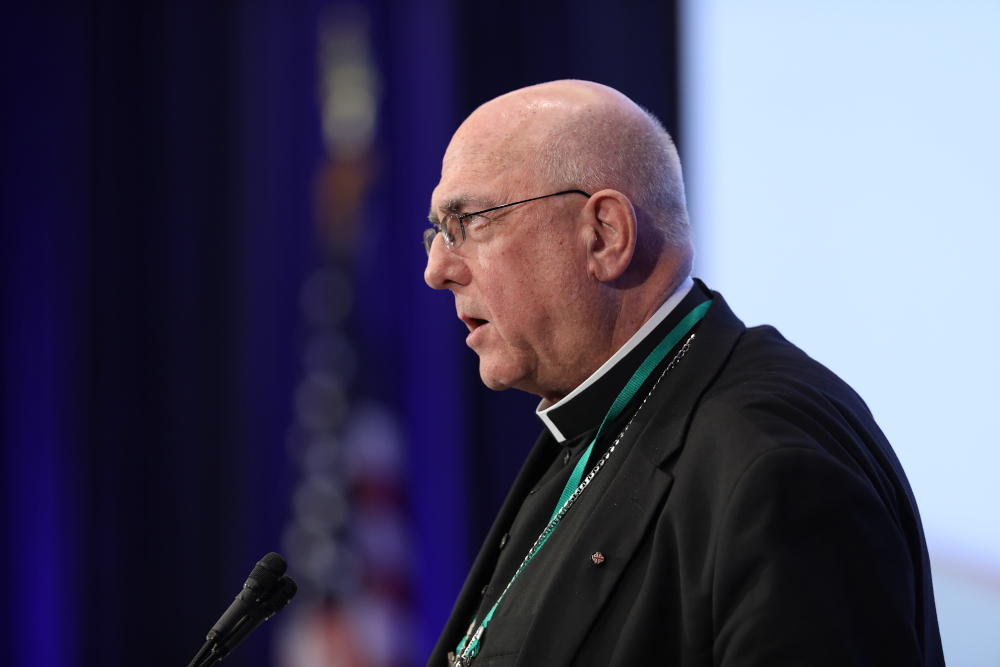 Archbishop Joseph F. Naumann sees the day that Catholic parishes can be one of the first places a woman facing an unexpected or challenging pregnancy can turn to for assistance rather than think of seeking an abortion.

To that end, the archbishop of Kansas City, Kansas, who is chairman of the U.S. bishops' Committee on Pro-Life Activities, invited his fellow bishops to devote a year of service to pregnant women starting in March.

In a presentation the first day of the U.S. Conference of Catholic Bishops' fall general assembly, the archbishop said Nov. 11 parishes could offer a variety of support services to women who may be thinking about whether to carry their child to term.

"Women facing challenging pregnancies should see the church as a place where they can find help, especially with our myriad of social services and organizations dedicated to meeting the needs of people in crisis," he said.

The archbishop cited statistics from abortion providers in 2014 that showed that 75% of women who chose abortion were poor, 60% were in their 20s and 86% were unmarried.

The year would begin March 25, 2020, the 25th anniversary of St. John Paul II's encyclical "Evangelium Vitae" ("The Gospel of Life"). He called the year "Walking With Moms in Need: A Year of Service."

"The 25th anniversary year of 'Evangelium Vitae' gives us a wonderful opportunity to assess, expand, and communicate resources to pregnant moms and families in need," Naumann told the assembly.

"Pope Francis has repeatedly challenged us to go to the margins and bring hope and help to those in need. It's what Catholics do. It's what Jesus expects of us," he told the assembly.

During discussion of the plan, Bishop Joseph J. Tyson of Yakima, Washington, explained how the three dioceses of Washington state — his diocese, the Spokane Diocese and the Seattle Archdiocese — are now in the fifth year of a program of outreach to pregnant women, offering services so that abortion is prevented.

He said the effort has involved more than half the parishes in the state and that the outcome has inspired participants and families.

Such collaborative efforts are exactly what the Committee on Pro-Life Activities has in mind in introducing its year of service, Naumann said, adding, "We want to learn from what you are doing and share that with other dioceses."

The pro-life activities committee's effort began with a survey of parishes and Catholic charitable agencies to better understand what services to pregnant women were being offered.

"We know that more than 500,000 pregnant women are helped each year through a network of more than 2,700 pregnancy help centers, where many of our people volunteer," he said. "Well over 150,000 low-income mothers deliver their babies at our Catholic Hospitals each year. Many tens of thousands of pregnant and parenting moms are helped each year through our Catholic Charities programs and help agencies. These are very encouraging numbers. Yet we also see that there are significant gaps."

He suggested that broader work is necessary to communicate the services currently offered.

The pro-life activities committee is developing educational, pastoral, and action-oriented materials for parish use during the year of service. Specifically, he said parishes would have tools for documenting local resources for pregnant mothers in need; suggestions for improving parish response; and prayers and reflections on the teachings of papal encyclicals "Evangelium Vitae," "Evangelii Gaudium" ("The Joy of the Gospel") and "Laudato Si', on Care for our Common Home."