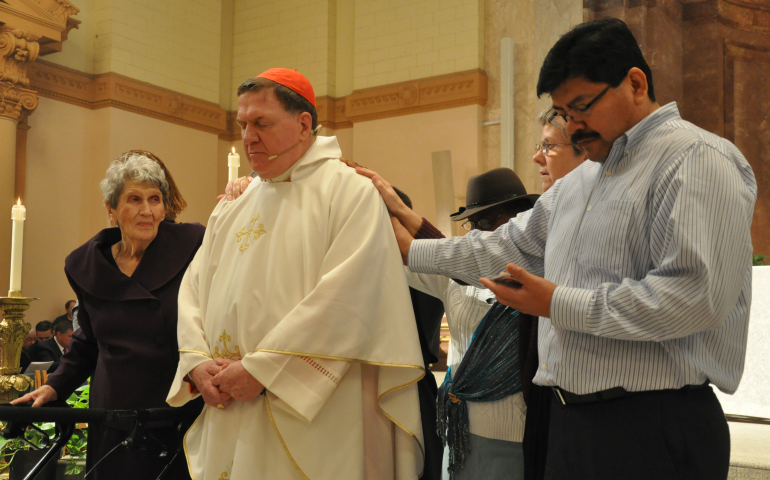 Deacon candidate Juan Carlos Ramirez, right, recites from a prayer card as he, Marie Tobin (Cardinal Joseph W. Tobin's mother), left, Domini Rouse and Benedictine Sister Jennifer Mechtild Horner lay their hands on Cardinal Tobin Dec. 3 in front of the altar at SS. Peter and Paul Cathedral in Indianapolis. Their prayers were part a prayer and blessing of the cardinal at a farewell Mass for him. (CNS photo/Natalie Hoefer, The Criterion)

On Dec. 3, 2012, then-Archbishop Joseph W. Tobin said that he and the faithful of central and southern Indiana were "under an obligation of love" to proclaim the Gospel of Jesus Christ.

He said this in the Mass at SS. Peter and Paul Cathedral in Indianapolis during which he was installed as the sixth archbishop of Indianapolis.

Four years later to the day, looking back on his time of ministry to and with the Catholics in central and southern Indiana, he said during another liturgy at the cathedral that "we fell in love then, and we remain that way today."

This Mass was originally planned as a celebration of Tobin being inducted into the College of Cardinals Nov. 19.

But when it was announced on Nov. 7 that Pope Francis had appointed Tobin to lead the Archdiocese of Newark, New Jersey, the Dec. 3 liturgy became a bittersweet farewell for Cardinal Tobin and the 1,000 Catholics from across central and southern Indiana who gathered in the cathedral to worship with him, and offer him their heartfelt prayers as he goes forward to lead the Church in northern New Jersey.

Both Masses four years apart were celebrated on the feast of St. Francis Xavier, the 16th-century Jesuit missionary to Asia who is the principal patron of the Archdiocese of Indianapolis.

In his closing remarks at the end of the Mass, Tobin, his voice filled with emotion, made his own the words of St. Paul in his First Letter to the Thessalonians to describe his love for the Catholics of central and southern Indiana, and the mission he was given in ministering to and with them.

"'With such affection for you, we were determined to share with you not only the Gospel of God, but our very selves as well, so beloved have you become to us,'" Tobin said, quoting Chapter 2, Verse 8, of the letter.

That emotion was shared by many people present in the cathedral.

Harold Back, 80, a member of St. Michael Parish in Brookville, also attended the installation Mass in 2012. During the past four years, Back has grown to love Tobin and was sad to see him go.

"He hit our hearts," Back said with emotion. "And when he hits your heart, he makes you cry. There's joy today, but there's also sadness," he told The Criterion, newspaper of the Archdiocese of Indianapolis. "It's been a wonderful four years of knowing Cardinal Joseph Tobin. He has meant so much to so many people in the archdiocese. It's awesome."

Harold and his wife, Donna, hope to travel to Newark for Cardinal Tobin's Jan. 6 installation Mass there.

"We're very sad to see him leave," Donna said. "He's just a very special person. I think the whole archdiocese is sad. I really do."

The love Tobin elicited from those in the cathedral Dec. 3 was palpable.

"I love this man," said Benedictine Sister Harriet Woehler, a founding member of Our Lady of Grace Monastery in Beech Grove.

"What he's done in these four years is unbelievable for me," Woehler said. "He reminds me of the Holy Father — what he's done for the world, and what this guy has done for our archdiocese."

For his part, Tobin expressed amazement in his homily at seeing all that Catholics in the archdiocese have done over the past four years to witness effectively to the Gospel.

"I have been privileged to see witnesses across the 39 counties of this archdiocese, people who quietly bear witness, give testimony to Jesus Christ in prisons, in hospitals, on college campuses, in CCD classes, in our Catholic grade and high schools," he said. "I've seen the witnesses of this archdiocese in the food kitchens, in the shelters, the outreach of Catholic Charities and the welcoming of refugees and strangers.

"I've seen the witness, and I think it's no accident that for the four years that I've presided over Easter Vigils here in the archdiocese, we've welcomed 1,000 or more new Catholics, men and women who saw the action of the disciples of Jesus and came to believe."

Retired Father James Bonke, a longtime priest of the archdiocese, shares a high assessment of Tobin's influence on the church in central and southern Indiana, attributing the impact the prelate's had to "his personality and the obvious depth of his faith and love for the church.

"That includes his love for his priests, and especially the people overall who are the church of the Archdiocese of Indianapolis," Bonke said. "He showed that in so many ways. He reached out to so many."

At the end of the Mass, the congregation prayed for Tobin.

During the prayer, he stood in front of the cathedral's altar with his eyes closed in prayer while a group of people representing the congregation stood around him and placed their hands on him.

One of those people was his mother, 93-year-old Marie Tobin, who was joined at the liturgy by 10 of her 13 children, including Tobin.

"To be with my son when he offers Mass is the epitome of my life, the high point forever," Marie Tobin said. "But to be surrounded by all this love for four years — I am just so grateful. I would like to be a Hoosier myself." She lives in Ontario.

At the end of his homily during the farewell Mass, Tobin recalled the story of a group of Anglican religious brothers in the Solomon Islands, who died for their faith in 2000 during peacemaking efforts in the island nation divided by ethnic strife.

In reflecting on the deaths of the fellow members of the community, one member of it said, "We know where we stand (and) who we belong to."

"Beyond all the history of confusion and betrayal that surrounds a lot of the church's history, beyond the power games that we still can play in the churches, beyond the terrible scandals that have lacerated the body of Christ," Tobin said, "this one rocklike conviction remains, the conviction that drove the writing of every word of the New Testament.

"It has nothing to do with conspiracies, opinion polls or the agenda of the powerful. It has everything to do with how the powerless, praying, risking their lives for the sake of Christ and his peace, are the ones who understand the word of God. They are witnesses," he continued.

To accept this, he said, "is not to sign up to the agenda of some sort of troubled, fussy human society of worried prelates and squabbling factions. It is not to enroll in a fraternity or sorority and begin paying dues. To be a witness in the church and for the world is to choose to belong to the life-giver, Jesus Christ. To him be glory, now and forever."

Tobin then said, "Let the church say," and the congregation responded with a resounding, "Amen!"