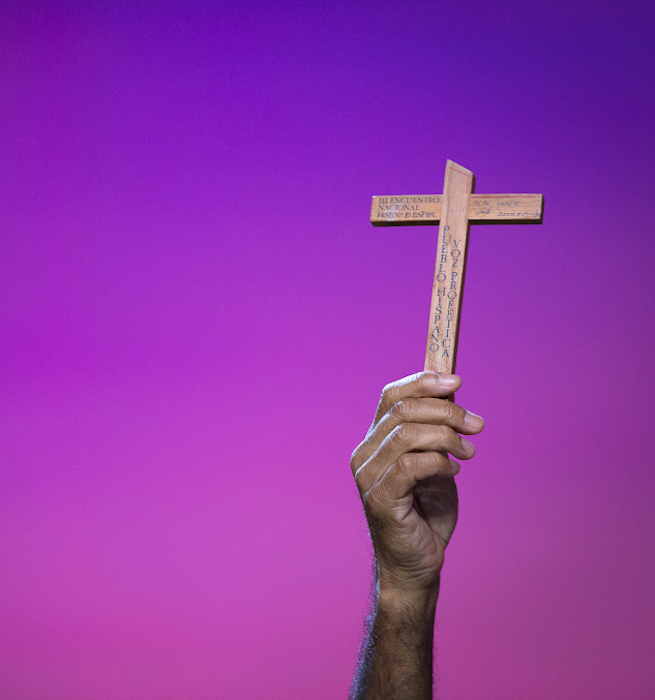 Jose Lopez, Hispanic minister from Stockton, Calif., raises the cross he received in 1985 from the Third National Encuentro during a Sept. 22 plenary session at the V Encuentro in Grapevine, Texas. (CNS/Tyler Orsburn)

The U.S. bishops, aware of the growing numbers of Catholics in the country who are of Hispanic origin, voted to write a new pastoral plan for Latino Catholics that would be produced sometime between 2021 and 2024.

The bishops also heard a follow-up to the V Encuentro, or Fifth National Encuentro, held last year in Grapevine, Texas. The Encuentro is a four-year process, and 2019 is year four. Leading up to national gathering were parish, diocesan and regional encuentros.

Bishops in their comments detected an urgency in responding to the pastoral needs of Hispanic Catholics, who could constitute a majority of all U.S. Catholics by midcentury.

"It's really important that there's a sense of 'we've got to get this done,' or it might come up here or four of five years from now," said retired Auxiliary Bishop William J. Justice of San Francisco. He added that "it's only natural" that the fervor generated at the V Encuentro "has gone down a little bit," but if such a slide continues, "we're in trouble."

"There was such great enthusiasm generated in that process from my own people," said Archbishop Alexander K. Sample of Portland, Oregon. "Since the Encuentro occurred, people are in my ear, asking, 'What's next? What's going on? Where is all this going?'"

A few bishops spoke of the need to have Hispanic children enrolled in Catholic schools.

Cardinal Sean P. O'Malley of Boston asked that the forthcoming plan emphasize Catholic schools. "There's been no institutions in the United States that have pulled people out of poverty more than Catholic schools," he said. "I hope we will push very much" for that.

"When I was in school, it was free. Today that's not possible, but we have to work very hard," he added.

Bishop Thomas J. Olmsted of Phoenix said, "We really need to train leaders, not so much within the parishes, but within society." Bishop Mark E. Brennan of Wheeling-Charleston, West Virginia, said to consider also the need for Latino permanent deacons.

It has even reached the highest levels of the church. Bishop Nelson J. Perez of Cleveland, chairman of the bishops' Committee on Cultural Diversity in the Church, was part of a delegation that delivered V Encuentro materials to Pope Francis. "The Holy Father received the documents with interest and offered words of encouragement," Perez said, adding the pope told them, "Continue to go further."

"In addition, our work continues on the Encuentro Youth and Young Adult Leadership Initiative," which Cepeda called "a direct pastoral response to the V Encuentro process." He added that its goal is "to form Hispanic/Latino young adults, and adults working this Hispanic/Latino youth and young adults through a solid certification program and to create a pathway towards degree programs."

Speaking on the pastoral plan OK'd by the bishops, Cepeda said: "We believe a new comprehensive plan will provide the church in the United States with the vision to guide and strengthen Hispanic ministry over the next 10 to 15 years."

He added the church is seeing "generational change from a larger immigrant population, which is still the reality in many dioceses, to a rapidly growing majority U.S. born Latino population. A new vision is needed."

He said the document will respond not only to the U.S. bishops' 2021-24 priorities and plans — approved at the fall meeting just the day before — but also to the recommendations of the V Encuentro process' ministry areas.

Cepeda said five elements would constitute the central focus of a comprehensive plan: championing the leadership development and formation of Hispanic and Latino youth and young adults; promoting vocations to the priesthood and religious life; promoting ministry models and resources for Hispanic families; "for the church to be an example and promoter of social justice and human dignity"; and identifying best practices in ministry with Hispanics in parishes, dioceses and other Catholic institutions.