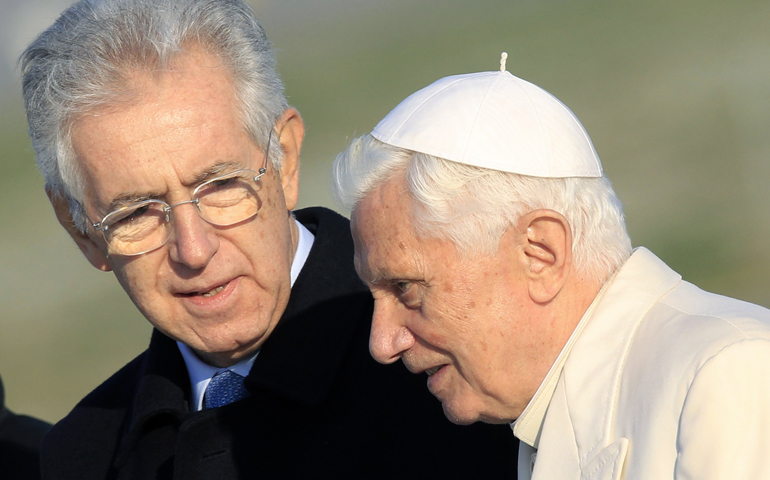 For those who aren't paying close attention to political theater in il bel paese, here's a brief recap.

In November 2011, the right-wing government of what we might charitably call the "flamboyant" Silvio Berlusconi unraveled amid criticism over his handling of the European debt crisis as well as scandals surrounding his personal life. The latter included infamous "bunga bunga" sex parties allegedly hosted by the 76-year-old Berlusconi, along with charges that he paid an underage Moroccan stripper for sex.

Veteran economist Mario Monti, so personally fastidious he's almost an anti-Berlusconi, was tapped to lead a technocratic regime. Fifteen months later, Monti gets credit for steering an austerity package through the notoriously fractious Italian parliament and for restoring credibility to government. At the same time, unemployment is up, Italy is still in a recession, Monti's proposed labor reforms are controversial, and a series of corruption scandals have left many Italians disgusted.

In that environment, Berlusconi is trying yet another comeback, leading his right-wing People of Freedom party. Pier Luigi Bersani, a former communist and a liberal Catholic who describes Pope John XXIII as among his heroes, leads the leftist Democratic Party. After originally vowing to step down after passing a budget, Monti now seeks another term. (As a senator for life, he can't actually run, but he can take part in the campaign and express readiness to serve if chosen by Parliament.) A popular comedian named Beppe Grillo is also on the ballot, representing a sort of "up-yours" vote against the establishment.

In this four-way race, with elections set for Feb. 24-25, it seems clear that the Vatican and the leadership of the Italian bishops are backing Monti.

Pope Benedict XVI has received Monti seven times in the short time since he took office. On background, Vatican officials have given reporters approving comments about "the Professor," as Monti is dubbed in the Italian press. Recently, L'Osservatore Romano carried an elegiac essay about Monti's "noble commitment to recover the highest sense of politics," while Vatican spokesperson Fr. Federico Lombardi made a point of announcing Benedict's Christmas good wishes to the prime minister. Cardinal Angelo Bagnasco of Genoa, president of the Italian bishops' conference, has said that Monti's "honesty and ability have been commonly recognized."

(For the record, enthusiasm is not universal. Recently, Archbishop Luigi Negri of Ferrara-Comacchio, a veteran of the center-right "Communion and Liberation" movement, testily rejected the idea that Monti's personal sobriety merits political support: "History is full of extremely sober totalitarianism," Negri quipped.)

How much difference church support might make isn't clear. Polls show Bersani with a healthy lead, largely because of his reputation for taking on Italy's hidden cartels while serving as Minister for Development under the last center-left government. Berlusconi finishes second in most surveys with Monti third, though no one seems likely to win an outright majority.

For our purposes, what's relevant is not who might win, but why most movers and shakers in the church have cast their lot with Monti.

For much of Berlusconi's 19 years in power, he and the church were allies. Berlusconi needed the Catholic vote to hold his fissiparous coalition (which included, among other odd couple combinations, heirs to Italian fascism who worship la patria and a far-right party that wants northern Italy to secede) together. The church needed Berlusconi to deliver aid to Catholic institutions and to hold the line on contentious bioethical issues such as same-sex unions, euthanasia and in-vitro fertilization.

Yet this was always a marriage of convenience rather than a true romance. Beyond Berlusconi's dubious morality, many senior church officials always distrusted his demagogic populism, his dependence on the xenophobic (and occasionally anticlerical) Northern League, and his penchant for creating acrimony. For his part, Berlusconi always seemed resentful of any source of authority other than himself.

Thus, when presented with an alternative, most church leaders embraced it.

Monti is a devout Catholic who attends Mass with his wife every Sunday and who projects great respect for the church. Practicing Catholics carry weight in his Cabinet, including the founder of the Community of Sant'Egidio, Andrea Riccardi, who serves as Minister of International Cooperation. (With its reputation for peacemaking and ecumenical and interfaith outreach, Sant'Egidio is seen as a natural home for center-left Catholics.) Monti also has cut the church some breaks, including working out a deal to avoid forcing the church to repay tax subsidies the EU had judged to be illegal and partially limiting the exposure of church-run hotels and hospitals to new property tax requirements.

Most basically of all, Monti reflects the political instincts of institutional Catholicism.

Even without the culture wars, the institutional church would never feel at home on the left; the church is too devoted to tradition and authority, too skeptical vis-à-vis claims of progress and liberation. Yet it's not comfortable on the right either, distrusting its worship of individual freedom at the expense of the common good and its hostility to government. Further, the Vatican diplomatic tradition fosters an allergy to ideologues of all stripes, making the utterly nonideological Monti a perfect fit.

All this suggests a memo to political writers and pundits. Only against the backdrop of an exclusively two-party system can the Catholic church accurately be described as a fixture of the right. Its natural habitat, so to speak, is in the middle, assuming there's a credible political middle on offer.