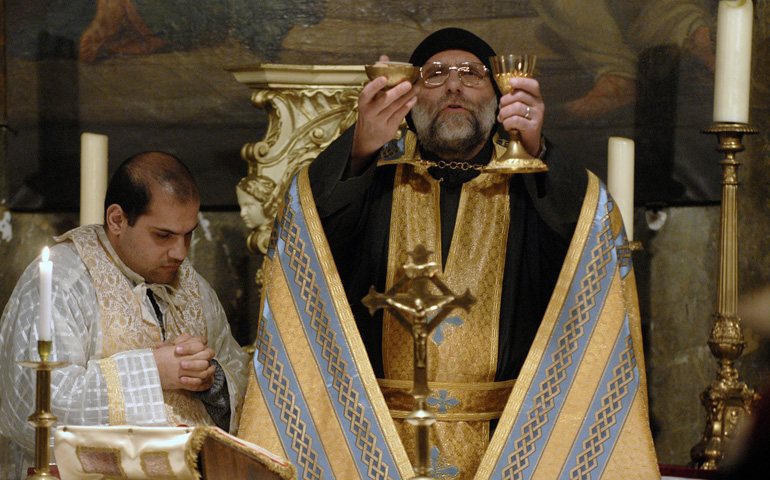 Like most journalists who have been in Rome lately, I know Fr. Paolo Dall'Oglio, the Jesuit missionary and pro-democracy activist who disappeared in Syria 11 days ago, becoming the latest symbol of the suffering afflicting everyone in that war-torn nation, especially its Christian minority.

Italian Foreign Minister Emma Bonino confirmed Tuesday that Dall'Oglio is in the hands of "a local version of Al-Qaeda," presumably a reference to the militant "Islamic State of Iraq and Syria" that's become a major player in the uprising against President Bashar Assad.

Few Westerners know Syria as well as Dall'Oglio or feel as passionate about it.

He lived in the country for 30 years, spending most of that time rebuilding an abandoned sixth-century monastery called Deir Mar Musa, turning it into a center for Muslim-Christian friendship. He launched the community al-Khalil, or "Friend of God" community, promoting a more appreciative understanding of Islam among Christians and vice versa. He's known among locals as "Abuna Paolo," Arabic for "Father Paolo."

None of that, however, really brought Dall'Oglio fame. Instead, what made him a celebrity was getting kicked out of the country in June 2012 on the basis of his outspoken support for the anti-Assad opposition.

In retrospect, the regime might have been better advised to keep its friends close and its enemies closer. In exile, the 58-year-old Jesuit has become a tireless crusader on behalf of what he calls "consensual democracy" in Syria, bluntly and repeatedly calling for Assad's ouster. As a result, he became a go-to figure for the press corps on all matters Syrian.

For reporters, Dall'Oglio is a godsend. He knows his stuff, having lived in the country for three decades, and he didn't spend most of that time on the corporate and diplomatic cocktail party circuit in Damascus. He was out in the trenches, where real people live.

He also has a clear point of view -- "Assad must go" -- that he expresses without a lot of guile or qualifications.

Dall'Oglio isn't afraid of challenging anyone he perceives as feckless. In June, I saw him on a panel in Rome with Italy's former foreign minister, Franco Frattini, where he openly scoffed when Frattini said he wasn't sure if Syria would be better off with regime change. He turned on Frattini, normally a figure who inspires deference if not always agreement, and gave him a blistering mini-education in the realities of life under Assad.

Dall'Oglio also delivered a great candidate for sound bite of the year not long ago, when he was asked about reports that the Vatican is opposed to outside military intervention to remove Assad from power.

"If they don't believe foreign troops sometimes have a legitimate role," Dall'Oglio shot back, "what are the Swiss Guards doing in St. Peter's Square?"

That said, Dall'Oglio's views aren't universally shared by Syria's Christians, many of whom are less sanguine about the country's prospects should Assad lose control.

During World Youth Day in Brazil, for example, I met a 29-year-old Latin rite Catholic from Damascus named Bashar Khoury, who bluntly said if Assad falls, he'll leave the country for good because in his eyes, it would mean the inevitable rise of an Islamic state.

Dall'Oglio believes Assad has exploited those fears among Christians, who represent roughly 10 percent of the population of 21 million, a point Dall'Oglio made in a recent letter to Pope Francis.

"Unfortunately, the Syrian regime has been very clever in using a certain number of clergymen, men and women, for its propaganda in the West, in which it represents itself as the only and ultimate bastion defending Christians persecuted by Islamic terrorism," Dall'Oglio wrote to the pontiff.

Dall'Oglio had slipped back into Syria to negotiate the release of a kidnapped TV crew and ended up being grabbed himself. Kidnapping is one of the main ways the country's various armed factions generate revenue; according to the website Ora Pro Siria, operated by Italian missionaries, the asking price for a kidnapped Christian clergyman today is in the neighborhood of $200,000.

When Pope Francis went to Rome's Church of the Gesu on July 31 to celebrate the feast of St. Ignatius Loyola with 200 fellow Jesuits, he prayed for "our brother in Syria" and said, "I am thinking of Padre Paolo."

Last Saturday, the Vatican's Congregation for Eastern Churches expressed "closeness in prayer" with the Jesuits in light of the "uncertainty" over Dall'Oglio and lamented the "absolute silence that weighs on the fate of the two bishops and two priests kidnapped months ago, as well as so many others, Syrians and foreigners, in the same painful condition."

The reference was to two Orthodox prelates, the Syriac Orthodox bishop of Aleppo, Msgr. Youhanna Ibrahim, and the Greek Orthodox Metropolitan of Aleppo and Iskenderun, Msgr. Boulos al-Yaziji, who were taken from their car by armed men on a road to Aleppo in April. Their driver, a Syriac Orthodox deacon, was shot to death.

While the rolls of the missing continue to mount, it's impossible to say what will become of Dall'Oglio or the others. One point, however, seems clear: If there really is a democratic, moderate center of gravity in Syria capable of getting things done, this would be a great time to prove it by leading the charge for Abuna Paolo.

Two other such cases, one in Kentucky and one in Wisconsin, had already collapsed. In all three instances, the lawsuits were withdrawn at the request of the plaintiff's lawyers as difficulties mounted of getting around the protections guaranteed the Vatican under the 1976 Foreign Sovereign Immunities Act.

So far, the Vatican has fought off these suits without admitting any wrongdoing and without paying a dime in settlements.

The Survivors Network of those Abused by Priests, the main advocacy group on behalf of victims of abuse, effectively paid Lena a backhanded compliment, asserting in a statement Tuesday that "smart and aggressive lawyering" was to blame for the result.

Such lawyering, SNAP charged, "has protected top Catholic officials from having to answer in court for their repeated and reckless secrecy and complicity in a troubling child sex abuse and cover up case."

Originally filed in 2002, the Oregon case concerned Andrew Ronan, an Irish ex-priest who belonged to the Servites, who died in 1992. Documents released as part of the case revealed Ronan engaged in sexual misconduct in the 1950s while serving in an Irish priory and was then transferred to St. Philip's High School in Chicago, also run by the Servites, where he abused youths in 1963-64. In 1965, Ronan was moved again to St. Albert's Church in Portland, Ore., where the suit alleges he abused the plaintiff in the lawsuit, identified only as "John V. Doe."

The heart of the lawsuit is the claim that Ronan was acting as an "agent" or an "employee" of the Holy See while he served as a priest, and the Vatican is responsible for damages from his behavior. When Judge Michael Mosman ruled in 2006 that he'd consider the factual basis for that claim, it made headlines as a hint that perhaps the Vatican's wall of sovereign immunity was beginning to crack. The Vatican appealed all the way to the Supreme Court with the support of the Obama administration, but in 2010, the Supreme Court refused to intervene, in effect allowing Mosman to go ahead.

Mosman's inquest prompted the Vatican to take the unprecedented step in 2011 of releasing online what it claimed were all the documents in its possession related to Ronan. The earliest dated to 1966, a year after the abuse described in the case occurred. It was a letter from Ronan, requesting laicization on the basis of what he described as "repeated, admitted, documented homosexual tendencies and acts against the vow of chastity and celibacy of the priesthood."

Having examined the paper trail, Mosman ruled last August that the Vatican could not be considered Ronan's "employer," which tore the foundation out from under the plaintiffs' argument and set the stage for withdrawal of the lawsuit a year later.

Looking back, there are a couple of ways in which the Vatican got lucky as this process played itself out.

First, church officials and spokespersons have been trying to convince people for years that Catholicism is not the rigid, top-down monolith of popular myth, with little avail. Now, they've got a U.S. federal court on record as saying priests don't work for the pope, at least in the usual sense -- they're not hired or fired by Rome, they're not supervised by the Vatican, their salaries don't come out of Vatican coffers, etc. If a priest has a boss, it's the local bishop, not the bishop of Rome.

This lawsuit probably did more to foster a realistic grasp of how the church works, in other words, than a half-dozen graduate seminars in ecclesiology.

Second, the Vatican dodged a bullet in the sense that it was the Oregon case that drew intense review from a federal judge rather than the O'Bryan v. Holy See lawsuit in Kentucky that was filed in 2004 and withdrawn in 2010.

The Oregon and Wisconsin cases were filed by Jeffrey Anderson, the highest-profile lawyer representing victims of clerical abuse. The lawyer in the Kentucky case was a local attorney who dropped it because he couldn't find other victims who hadn't already been part of litigation against the church; hence, the costs weren't worth the potential payoff down the road.

Had the suit gone ahead, it would have been a fascinating test because of a key difference in its underlying argument. Unlike Oregon and Wisconsin, the Kentucky lawsuit asserted that bishops, not priests, are "agents" or "employees" of the Vatican, and by sweeping abuse under the rug, they were acting according to policies established by their supervisors in Rome.

Whatever one makes of that, there's certainly a stronger argument, both theologically and practically, for styling the 5,100 bishops of the world as Vatican "employees" rather than 412,000 priests. If a neutral third party really put the claim under a microscope, it's tougher to predict which way things might go.

Given the litigious temper of the times, it's entirely possible that some court someday will return to the question. For now, however, the Vatican's American legal team can take a breather.

Wednesday brought a reminder that cleanup from the abuse scandals is still underway with a sentence from the Vatican's Congregation for the Doctrine of the Faith regarding a high-profile priest from Sicily named Don Carlo Chiarenza.

The former rector of the cathedral in the Sicilian diocese of Acireale and a prominent figure on the local scene, Chiarenza had been accused of abuse by a Sicilian scientist named Teodoro Pulvirenti, who came forward last year claiming Chiarenza molested him between 1989 and 1991, when Pulvirenti was 14 or 15 years old. To back up those accusations, Pulvirenti released the tape of a conversation he secretly recorded with Chiarenza in which the priest appeared to admit the abuse.

On Wednesday, the bishop of Acireale announced that the Congregation for the Doctrine of the Faith had completed a canonical investigation and found Chiarenza guilty, sentencing him to leave the diocese and forbidding him from exercising any public ministry or holding any ecclesiastical position.

Chiarenza continues to assert his innocence, and his lawyers say they'll turn to the Italian criminal justice system to try to clear his name, hoping an acquittal there will prompt the church to reconsider its verdict.

Among other things, that reaction illustrates a striking irony. Not so long ago, it was believed accused priests would always be treated more gingerly by the church than by civil prosecutors. Today, accused priests instead occasionally find themselves hoping a civil investigation will get the church to back down.

If nothing else, the contrast seems to suggest how much the wheels have turned.