The one word to describe Pope Francis' papacy to date 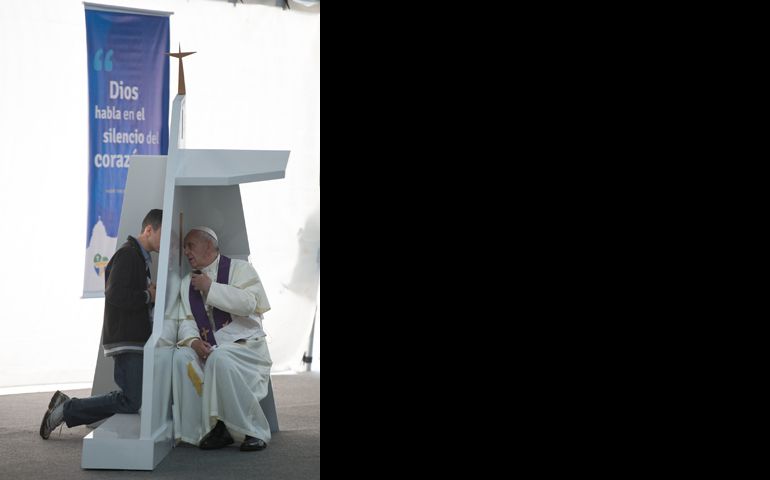 In most respects, Alitalia flight 4001 from Rio de Janeiro to Rome on Sunday night was nothing to write home about. The seats in economy class were fairly uncomfortable, and the food was merely adequate. The main course was a lukewarm square of lasagna roughly the size of a Ritz cracker.

I'll say this for it, however: The in-flight entertainment was spectacular.

As is by now well-known, we were treated to a pope standing in the press compartment for an hour and 20 minutes, taking questions on every topic under the sun with no filters and no limits, speaking without notes and delivering straight answers. Among other things, one had to be awed by the energy of the 76-year-old pontiff, who had just finished a grueling seven-day trip to Brazil yet seemed capable of going on almost indefinitely.

As I said Monday on CNN with Michael Holmes, when you cover the Vatican, you sometimes sit around late at night dreaming of moments like this, but you never really think you'll live to see them happen.

While the headline was the pope's comments on gays -- "Who am I to judge?" -- it was a sprawling conversation, with the full transcript extending to almost 10,000 words. It's dangerous with such a wide range of topics to try to reduce the pope's message to a single word, but in this case, I believe it can be done without leaving anything essential out of view.

The one-word interpretive key to Francis' news conference and arguably to his entire papacy to date: "mercy."

As I've written before, each recent pope has had a catchphrase that represents his core emphasis. For John Paul II, it was "Be not afraid!", a call to revive the church's missionary swagger after a period of introspection and self-doubt. For Benedict, it was "reason and faith," the argument that religion shorn of self-critical reflection becomes extremism while human reason without the orientation of ultimate truths becomes skepticism and nihilism.

For Francis, his signature idea is mercy. Over and over again, he emphasizes God's endless capacity to forgive, insisting what the world needs to hear from the church above all today is a message of compassion.

Sorting through all the comments Francis made during the on-board news conference, probably the single most revealing came in response to a question about divorced and remarried Catholics. We'll come to the specifics on that issue another time, but it was the preface to his answer that provides the best window into his pastoral philosophy.

Here's what he said, word for word, translated from Italian.

"Mercy is a larger theme than the question you raise [divorced and remarried Catholics]. I believe this is the time of mercy. This change of epoch, also because of many problems of the church -- such as the example of some priests who aren't good, also the problems of corruption in the church -- and also the problem of clericalism, for example, has left many wounds, many wounds. The church is a mother: It must reach out to heal the wounds, yes? With mercy. If the Lord never tires of forgiving, we don't have any other path than this one: before anything else, curing the wounds, yes? It's a mother, the church, and it must go down this path of mercy. It must find mercy for everyone, no? I think about how when the Prodigal Son returned home, his father didn't say: 'But you, listen, sit down. What did you do with the money?' No, he held a party. Then, maybe, when the son wanted to talk, he talked. The church must do the same. When there's someone ... but, it's not enough to wait for them: We must go and seek them. This is mercy. And I believe that is a kairos: This time is a kairos of mercy. John Paul II had this intuition first, when he began with Faustina Kowalska, the Divine Mercy ... he had something, he intuited that it was a necessity of this time."

Kairos is a deeply evocative Gospel term that means an appointed moment in the plan of God, as in Mark 1:15: "This is the time of fulfillment. The kingdom of God is at hand." The Greek term for "time" in that passage is kairos. In the Christian imagination, the term kairos conjures up a special moment in history when a particular aspect of God's plan for salvation is unfolding.

Francis' emphasis on mercy is nearly ubiquitous. In a recent essay for the Italian newspaper Corriere della Sera, Enzo Bianchi, founder of the celebrated ecumenical monastery of Bose, offered a statistical analysis of the words used most frequently by Francis since his election. He found that the single most commonly used term was "joy," more than a hundred times, followed closely by "mercy," which the pope has used almost a hundred times.

This conviction that we are living in a kairos of mercy makes sense of everything else the pope said on the plane and, for that matter, most of what he's said and done since his election in March.

It explains his unwillingness to pass judgment on gays, and it also explains his refusal to be drawn into a political diatribe when a Brazilian journalist asked him about recent laws in the country liberalizing abortion and permitting same-sex marriage. Asked why he didn't address those issues during his trip, the pope said, "It wasn't necessary to speak of them, but of the positive things that get young people going. Anyway, young people know perfectly well what the position of the church is."

There you have it in a nutshell. Francis is no doctrinal radical, and there will likely be no substantive upheaval of the church's positions on issues of gender and sex or anything else. On the one specific question Francis fielded along these lines, women's ordination, he reaffirmed "that door is closed."

The revolution under Francis is not one of content, but of tone. He believes it's time for the church to lift up its merciful face to the world, in part because of its own self-inflicted wounds and in part because of the harsh and unforgiving temper of the times. This is a pope who will look for every chance to express compassion, steering clear of finger-wagging unless it's absolutely necessary.

His focus on mercy also helps explain why the sacrament of confession is so important to him, why he made a point of hearing confessions before Mass during his first visit to a Roman parish May 31, something John Paul II and Benedict didn't do. As I wrote July 26, it's quite possible that when he went to Rio de Janeiro's Boa Vista Park to hear five confessions that morning, in his own mind, it was the most important thing he did all week.

The importance of mercy is also expressed in the motto Francis took as pope: Miserando atque eligendo, which means, roughly, "by having mercy and by choosing."

In the popular press, Francis has been dubbed "The Pope of the Poor" and "The People's Pope," and both capture something essential. If you want a formula that most clearly expresses the beating heart of Francis' papacy, however, the best candidate is probably "The Pope of Mercy."

The one word to describe Pope Francis' papacy to date

Liberating the Christian voice in the Arab Spring

Benedict in Cameroon a tale of two trips