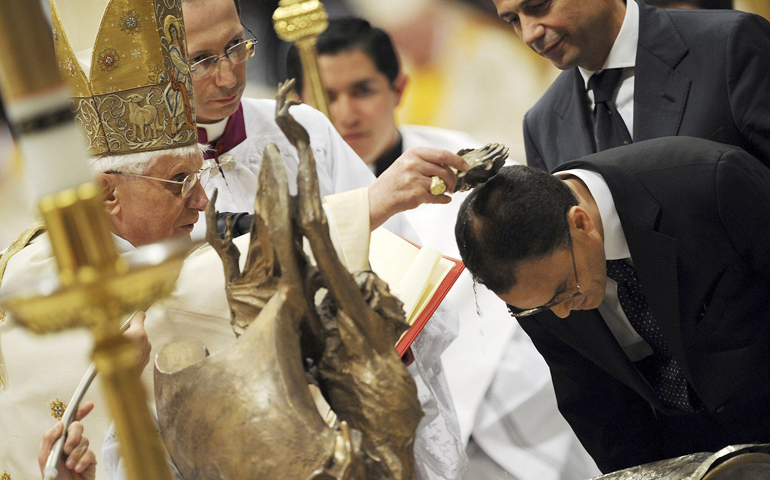 Amid the generally positive reaction to Pope Francis, Monday brought a dissenting note. The most celebrated convert of the Benedict years announced he has abandoned the Catholic church, primarily for what he sees as its overly indulgent view of Islam as well as distaste for the "papal idolatry" aroused by Francis' election.

Magdi Cristiano Allam, an Egyptian-born politician and essayist in Italy, rose to fame by styling Islam not as a religion but a violent ideology akin to fascism and communism. He was personally received into the church by Benedict XVI during the Easter vigil of 2008 and announced in the pages of Il Giornale on Monday that he now considers his Catholicism "expired in conjunction with the end of his papacy."

Allam adds that a positive reference by Francis to Islam in a recent speech to diplomats was the straw that broke the camel's back. He remains a Christian, but no longer identifies himself as Catholic.

Reaction has tended to splinter into three broad streams:

Unfortunately, in thinking about why Allam took this step, most people haven't gotten past the headline. If you consider the entire essay he published March 25 outlining his thinking, it makes for very interesting reading.

Allam says he's leaving Catholicism because of what he describes as four "physiological" features of the church he can no longer tolerate:

Here's the thing. Aside from the fourth point, which is a gratuitous blast against Catholic morality, Allam is basically right on the money on the other three.

First, the church is not "relativist" in the strict sense because it has a body of teachings it regards as absolutely true. But as Allam correctly notes, Catholicism contains within itself multitudes of different interpretations and applications of this teaching, which at times does indeed seem like "everything and the opposite of everything."

Catholicism is a church rather than a sect, meaning that membership in the family of the faith has always been more fundamental than ideological purity. Catholicism embraces both hawks and doves on Islam, both libertarians and interventionists on the economy, both hardliners and moderates on the culture wars.

This doesn't mean absolutely anything goes, and negotiating the limits of this diversity is a constant source of heartburn. The point, however, is that anyone who enters the Catholic church or who remains in it expecting it to behave like a political party is destined for disappointment.

Second, Allam is right that Catholicism is unapologetically globalist. While the church encourages its members to be good citizens, including a moderate dose of national pride, the fact of being a planetary religious body encourages Catholics to think well beyond national borders in terms of their moral concern.

Cardinal Walter Kasper, the theologian recently cited by Pope Francis during his first Angelus address, once expressed the Catholic view of things by saying that an overly strong identification of the Gospel with a particular culture or nation is actually an "ecclesiological heresy." (He made the remark in 2005, when some Orthodox insisted that creating Catholic dioceses in Russia violated their "canonical territory.")

Once again, anyone who doesn't want to experience a degree of tension between their national loyalties and their religious identity is never going to be completely comfortable in Catholicism.

Finally, the Italian word used by Allam that I translated above as being "do-gooders" is actually buonista, which has the sense not only of doing good deeds but of being a bit weak, seeking compromise even with irreconcilably opposed positions for the sake of avoiding conflict.

Of course, Catholicism can and does at times draw lines in the sand, even at the price of arousing opposition. Yet Allam is correct that most of the time, that's not the church's first instinct, and it's always leavened by pastoral concern for the people on the other side of these breaches.

Anyone who would prefer that Catholicism function like an interest group or a social club in which there's free license to demonize -- or, at least, to dismiss -- people on the other side of whatever fault line is at issue is unlikely ever to be fully satisfied.

A line comes to mind that they teach at the Accademia, the Vatican's elite school for diplomats in Rome: "Not every sentence of a heretic is heresy." In other words, wisdom can be gleaned even from people violently opposed to the church on some fronts. If that's buonismo, it's also classically Catholic.

Given Allam's discomfort with these three points, his decision to leave seems a bit more rational.

After all, the current love affair with Francis will likely fade the first time he has to make a hard decision, and there's precious little evidence that his brief and generic reference to Islam heralds complete surrender. There's every reason to believe that the press for greater religious freedom in Muslim societies will be a prime social and political commitment of the church for the foreseeable future.

On the other hand, these three "physiological" features of Catholicism are hard-wired into the church's DNA, and it certainly isn't just Allam who sometimes finds them irritating.

In fact, I wonder if some of the angst in Catholic life today suggests that, whether we want to admit it or not, there's actually a little Magdi Allam in all of us.

I'll be in Argentina next week doing some background reporting on the kind of pope Francis might turn out to be based on his record in his home country. Watch the NCR Today website for my reports.

Editor's note: We can send you an email alert every time John Allen's column, "All Things Catholic," is posted to NCRonline.org. Go to this page and follow directions: Email alert sign-up.