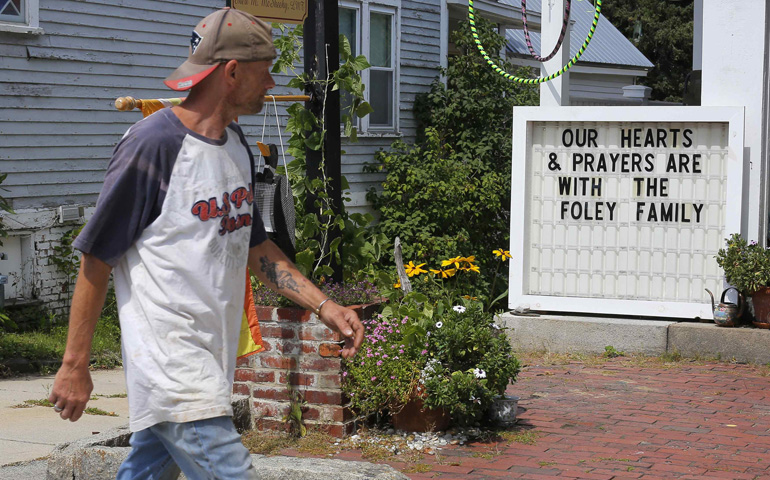 A man walks past a sign outside a shop Aug. 20 put up in memory of James Foley in his hometown of Rochester, N.H. (CNS/Reuters/Brian Snyder)

Norman Mailer originally wanted to call his final book of reflections on God, sin, and the human role in the battle of good and evil Into the Mystery. In failing health, he knew he would enter the Mystery soon.

The publisher changed the title to God: An Uncommon Conversation, but it remains suffused with Mailer's lifelong and, some would say, idiosyncratic sense of the cosmic warfare between good and evil in which our moral choices constantly set and upset the balance between these two forces.

The reporter James Foley has now, in our inadequate way of speaking of time, the true source of our sorrows, entered the great Mystery -- that Mysterium tremendum et fascinans, the tremendous and gripping Mystery -- in which, identified by name or not, all our lives are set. Foley's life was a fearless but uncommon conversation about this Mystery that he tracked in his calling as a journalist.

Imprisoned, he came face to face with this Mystery in a thorny wildness of land not unlike that in which John the Baptist fearlessly heralded Jesus. Both were imprisoned for their passion for the truth that, in one of the convolutions of Mystery, led both men to the same death at the hands of history's cowards, the men less by any measure than they, the men whose faces we never see, these ruthless agents of evil who make the Mystery so hard to accept and impossible to explain.

You can sense that James Foley had a sense of the Mystery, for he had been imprisoned by Moammar Gadhafi's forces in 2011 and afterward wrote in Marquette, the magazine of the university he attended, of how he did not cower before it but, by his faith, entered the Mystery and made it his own. He counted off the Hail Marys on his knuckles as he prayed the rosary, as had his mother and grandmother.

"I prayed," he wrote, signaling his keen sense of being caught up in the great Mystery that transcends time and its sorrows as it sweeps us up, "that I could communicate through some cosmic reach of the universe to her [his mother]."

Let me return to a theme I have explored before in the face of inexplicable tragedy, that numbness that tells us that we have touched and been touched by the great and compelling Mystery. The great Irish writer James Joyce puts it in the thoughts of his character Stephen Dedalus.

"Pity," he writes, "is the feeling which arrests the mind in the presence of whatsoever is grave and constant in human suffering and unites it with the human sufferer."

"Terror," he tells us, "is the feeling that arrests the mind in the presence of whatsoever is grave and constant in human suffering and unites it with the secret cause."

What is this secret cause we cannot name that lies curled in the Mystery of the act of terror, in whose age we live and which killed James Foley? The explanation of this secret cause is not found in newspaper analyses or the opinions of pundits, for they can only look now this way and now that at the public cause of this good man's death.

We know well, for example, the public cause of the death of the Rev. Martin Luther King Jr. That great man was shot as he stood on the balcony of a motel in Memphis, Tenn., by a broken-down wanderer, James Earl Ray. The secret cause of King's death was his life, for every day, he faced down threats and terror to fulfill his great calling to bring to his followers the justice that had long been denied to them. The secret cause of King's death was his fearless pursuit of the destiny he had sought out all his life.

The secret cause of James Foley's death was found in the vulnerability he took on when he chose to be a journalist committed to bringing light to set the suppressed truth free. The secret cause can be seen working its way through the patterns of choices he made as he wrote the story of our terror-filled times and of his life at the same time.

You can read his destiny in the faces of his parents as one could have read it in the face of Mary as Jesus broke away to reveal himself and do his Father's will. The secret cause has a wrenching truth about it that, looking back, we can see clearly even when we paid little attention to it before. You can read his destiny in the eyes of his mother and father, who took on their painful destiny by raising a good son and letting him be free to live a life that he and they knew was filled with danger.

You can read it in the quiet ministrations of their pastor, Fr. Paul Gousse, who would not speak to reporters as he left the Foleys' home, knowing that he was fulfilling his destiny by entering the veil of sorrow and treating it as something sacred. So, too, you can read it in the phone call from Pope Francis, who sensed the deep Mystery from half a world away and entered it gently and quietly, showing that he recognized but had no easy clichés for such overpowering sorrow. They all sensed that James Foley had entered fully the Mystery that he had, in a sense, been covering all his life.

Editor's note: We can send you an email alert every time Eugene Cullen Kennedy's column, Bulletins from the Human Side, is posted. Go to this page and follow directions: Email alert sign-up.