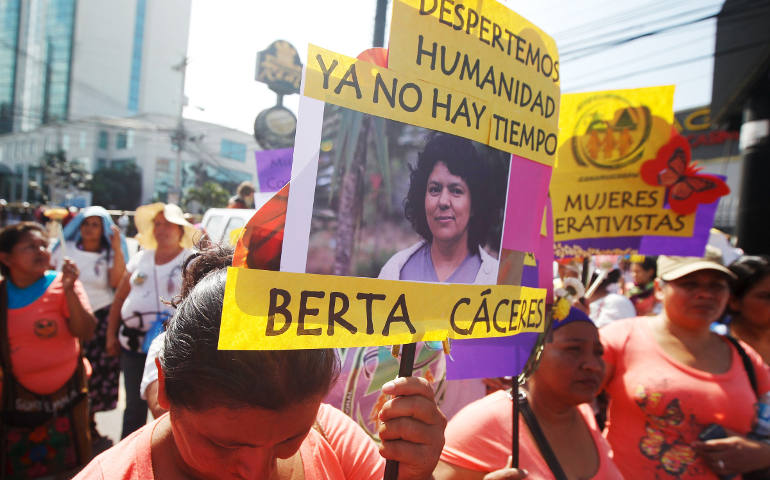 At least 25 Catholic groups joined nongovernmental organizations in condemning the murder of Honduran environmental activist Berta Caceres, calling for a change in U.S. policy toward assistance in the region.

In an open letter to U.S. Secretary of State John Kerry, the organizations demanded a proper investigation into a crime that has captured international attention and put a spotlight on impunity in the Central American country. The called for the U.S. government to not allow the killing of Caceres to go unsolved and unpunished and to avoid a response of "business as usual." Instead, they urged, the U.S. should use the tragedy to make "a profound change of direction toward improving the abysmal situation of human rights in Honduras."

"We ask that the State Department make clear to the Honduran government that future partnership and funding depends on demonstrating the political will to investigate and prosecute this crime and all crimes against human rights defenders," the groups said in the letter, dated March 7.

"The Honduran government ... must guarantee freedom of expression, including by ending harsh, constant repression of social protests, ensuring an immediate end to intimidating public statements by government officials and members of the military and police that place human rights defenders and journalists in danger, and ending specious prosecution of human rights defenders."

Caceres was murdered in her home March 3, in an attack initially attributed to robbery by the authorities. That explanation was rejected by her friends and family, who say she came under constant threat from landowners' groups, the police and soldiers.

An indigenous Lenca in the western part of Honduras, Caceres rallied opposition to a hydroelectric project, which was proposed without the consultation of local peoples and threatened to ruin a river the Lenca people considered a key water source and important to their local culture and way of life.

She won the 2015 Goldman Environmental Prize for her work against construction of the Agua Zarca dam on the Gualcarque River. Caceres also participated in the inaugural 2014 meeting of the World Meeting of Popular Movements at the Vatican.

"Berta Caceres united us in the patriotic sentiment of a struggle for justice from the worldview of the original peoples, working for the construction of a new society and world where no family lacks housing, no worker lacks a job and no campesino lacks land," Caritas Honduras said in a March 5 statement.

Honduras has suffered instability and insecurity since a 2009 coup, while corruption has caused widespread protests -- especially in 2014 after revelations that money embezzled from the state social security institute ended up in the governing National Party's election campaign.

The statement by the social organizations urged the U.S. government to change its approach by calling for more accountability of the projects it supports and backing those working to protect their traditional territories.

"The U.S. government must stand with those who are putting their lives on the line for the protection of human rights and the environment in Honduras," said the statement, which included signatures from the Leadership Conference of Women Religious, the Conference of Major Superiors of Men, the Maryknoll Office for Global Concerns, the U.S. province of the Missionary Oblates of Mary Immaculate, the Ignatian Solidarity Network and Franciscan Action Network.

"We urge the State Department to suspend all assistance and training to Honduran security forces, with the exception of investigatory and forensic assistance to the police, so long as the murders of Berta Caceres and scores of other Honduran activists remain in impunity," the statement said.