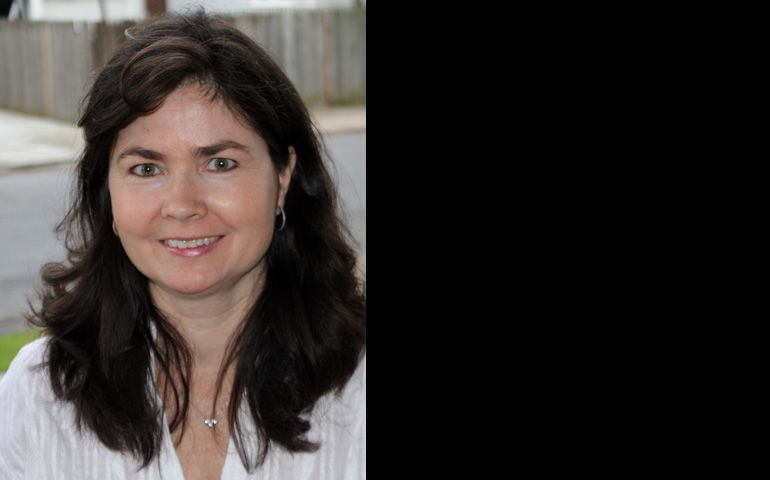 Siobhan Byrne O'Connor enjoys her life as wife to Daniel O'Connor and mother of their three children, ages 12, 8 and 6.

"My children and my family are my greatest joy," she said. "I have a terrific husband and so I feel like I've won some cosmic jackpot."

She's also happy in her chosen career as script writer and supervising producer of the popular television series "Blue Bloods."

Being a devout Catholic in a media world not ordinarily sympathetic to the church presents its own range of challenges; however, Siobhan is personable and competent. She also has a powerful ally in the industry, David Black, creator of "Law and Order," under whose tutelage she began her career. He recognized and encouraged her talent, and about 18 years ago, suggested I meet this talented newcomer to the world of scriptwriting.

Camille: Siobhan, what is it like for a practicing Catholic to be working in the entertainment industry?
Unfortunately, the Catholic church isn't held in high regard. The church does so many wonderful things, but most people are unaware of them. It's becoming acceptable to bash the Catholic church in ways other religions don't experience. Much of that is a result of the sex scandals and how they were handled and also the negative stereotyping of women religious. Then some Catholics have horror stories about their school experiences. I always insist that mine were just the opposite.

In what ways?
My recollections of Catholic school could not be more different than the widely accepted vision of the nun in black habit brandishing a ruler. I had very kind, socially active, devoted sisters who stayed after school on their own time and for no money to help students who were falling behind. These Amityville Dominicans created "no child left behind." They went above and beyond not only to teach, but to cater to the students as whole persons. The sisters really helped foster smart, socially conscious individuals.

Did they impact your current career?
They were a reason I went into writing. At St. Agnes High School in College Point (N.Y.) I joined the yearbook and newspaper staffs. The nun who was principal at the time actually paid for me and a few other girls to fly to Ohio University for a workshop to improve the yearbook.

Does the faith they imparted affect your view of life?
I love that at the root of Catholicism is a belief in forgiveness and the encouragement to use it liberally.

Say a little more about that.
Throughout grammar school and high school the sisters instilled in us that there's no right time for revenge. Thinking about forgiveness helps me to look at everything from the other person's perspective. That attitude is essential for a writer too.

Who else most influenced your belief system?
My mother and grandmother. Growing up, I spent many summers in Ireland. Until my grandmother passed away at 95 she went to Mass every day. Around the town where she lived some people who didn't know her name referred to her as "the God-be-with-you-woman" because that is the phrase --"God be with you" -- she would use to everyone: shopkeepers, neighbors, mail carriers, etc. My mother's the same. She's a very devoted churchgoer and has been a caretaker her whole life. I attribute a great deal of my success to her religious devotion because I'm often the object of her intentions!

Did any particular event affect your faith?
I had an uncle who was a World War II veteran. He never married and lived in an apartment on New York's Upper East Side. He used to spend one night a week at our house, so he was very much a part of our family. As a volunteer in his parish, Our Lady of Good Counsel, he was supposed to usher out the homeless men and women when it was time to lock the church. Because he was such a kind-hearted soul, he would give them his own money to leave so they could get something to eat. ... One week, he didn't show up for his weekly sleepover and we couldn't reach him by phone, so my brother and I drove to his apartment and found him dead.

Because he lived alone, we had to deal with the medical examiner's office, the NYPD and funeral homes who rattled off prices and procedures. Dealing with these agencies was particularly devastating because they treat death as a business. It was only when we turned to the church that I felt someone cared that this was not just a body to be disposed of, but a soul to be tended to. It really hit home that one of the things the church gives us is a sense of dignity, respect and a place in the world, a meaningful existence. My uncle's parish scheduled a memorial mass for him that included several priests and deacons. It was very beautiful and in a week that I remember as one of the most stressful in my life, it was the first time I felt peace and I understood a basic human need that the church fulfills, and that is the acknowledgement that we are all important in God's eyes.

Has your image of God changed over the years?
The thing that has changed most about my image of God is that I no longer have an image. I don't think in terms of an image at all. The idea of that is too tangible. So while I grew up with all the religious images and icons from paintings to stained glass windows, I don't think of God in a visual way, but I guess in a more visceral way. I don't think of God personified, but more of a presence based on feeling, not intellect.

"Blue Bloods" is about a crime-fighting family. Has your belief system had an impact on the storylines?
I've been able to explore weighty subjects. An episode I have shooting now has two storylines ... one is about a man who has spent 18 years in prison for rape, and new DNA exonerates him. Frank (Tom Selleck), as the arresting officer, has to grapple with the consequences of this. The other story is about three innocent kids who are gunned down in a park in broad daylight. Danny (Donnie Wahlberg) catches the case, and throughout he is driven by the need to find out who killed them and why. And the more the case seems to indicate it was a random shooting the more he wants an answer, because the idea that senseless violence has invaded his world (which is usually filled with motive and opportunity) is so discomforting. What is so great about "Blue Bloods" and what makes it so different is the family element. We don't just explore crime stories, but use them more as a jumping-off point to explore the family's relationships, beliefs and journeys. We not only tackle larger societal questions and concerns, but how they impact a family that is enmeshed in law enforcement and the legal system. Because this is an Irish-American, Catholic family the writers are free to explore issues of faith and culture.

Does the fact that your husband's a police officer help your work on "Blue Bloods"?
Yes. He gives me a lot of insight into law enforcement and what it's like to be a cop. But he also helps me creatively. Dan comes from a family of cops. Four cousins growing up in the same house chose that career.

Does anything in the church distress you?
I have three children who attend Catholic school and I am very disheartened by the way the schools are being overseen. There is a change taking place within the next three to five years where schools will no longer be "parish-based" but will be separate entities. They will have committees overseeing the principal's decisions, and not once, as a Catholic school parent, have I been invited to a meeting to discuss these widespread changes, or asked for my input. ... Catholic school parents should be the first ones that the bishop reaches out to when making these decisions. We are, after all, the ones sacrificing to send our children to school, and I find when talking to other Catholic school parents that there is a growing resentment and distrust because of this. The Catholic Church, in my opinion, is not doing nearly enough to preserve these great institutions.

How do you pray?
Driving in my car, or kneeling in church. And of course, every time I press that send button, with a script attached.

Life work that helps others is Dennis Gallagher's goal