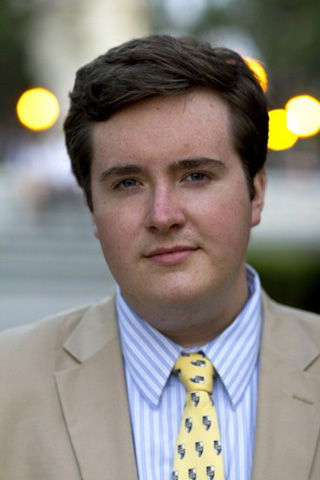 Sr. Camille: John, you came to my attention unsolicited but very welcome. Our mutual friend, Mercy Sr. Carol Conly, thinks the world of you. She said that you're the CEO of a foundation to help disadvantaged young people understand the political process. What's that about, and why is it important to you?

McCarthy: I've always seen politics as an effective way to harness the power of a community to serve the common good. It's our collective way of deciding who gets what, when, where and how much, and it reflects the values of our society. Future Civic Leaders came about because there's a part of our society that has been systematically left out of the process: those living on the margins of society.

Young people from underserved communities are less likely to vote, join community organizations, have trust in their government's effectiveness, or believe that they have a voice in their community process. The programs we offer focus on the skills required to actively engage with elected officials. These include speech-writing, message development, action plan building, and coalition organizing. By teaching this skills-oriented approach to politics, we empower students to engage the process on their own and change their neighborhoods for the better.

What are the challenges involved in promoting this kind of education?

We often teach politics by the traditional textbook, i.e., how a bill becomes a law. For many, this is far removed from their daily lives, and as a result, they choose not to engage in the process. What happens in Washington, or even their state legislature, doesn't hit home in the same way that things happening in their community do. As a result, people involved in the political process who are looking to engage the public need to constantly focus on building the connection between government function and everyday life.

For example, we ask our students about the biggest issue facing their community. So often, we hear responses like "crime," "curfew" or "gentrification," but rarely do they view these problems as inherently political, opting instead to view them as simply things that happen where they live. Once you build the connection, showing them that officeholders matter and that they have the power to make a change, the politics becomes personal.

This isn't a new concern for you, is it? It stems back at least to your time at The Catholic University of America. What political action did you engage in there?

It stems back to my childhood. I spent most of my time growing up being the only person my age interested in politics. I quickly got used to being the youngest person in the room in most political settings. I started to realize that young people typically undersell themselves by creating outside organizations that give a false sense of influence. Rather than actively engaging the current political system and working to better it, we create outside bureaucracies, give ourselves titles, and only claw at the door of power.

When I was 18, I ran for my local Democratic county committee and was elected the Democratic municipal chair of Keansburg, N.J., making me the youngest municipal chair in the county and the state. It was important for me to be a part of the system that already existed and to show that young people could be effective in party politics.

In college, I was chair of the College Democrats at The Catholic University of America, which I entered entirely for fun. But on a personal note, it was important to me that the national university of the Catholic church have an active, strong College Democrats group. Young people tend to think about their faith and their politics for the first time seriously while they're in college. All of my political engagement was driven and informed by my faith, and for me, it was important to show that faith could find a home in the Democratic party, a concept not always welcome by young people of faith.

Did you come from a politically active family?

Not in the traditional sense of "My dad is a senator and my mom is the local mayor." Neither of my parents was directly political but taught me everything I know about politics. They instilled in me a deep sense of commitment to those around you, always standing by your word, and knowing that there's nothing more important than giving back. My parents are two of the most selfless people on the face of the earth, and anyone in politics would be wise to take a page from their book!

Can you trace your passion for the marriage of faith and politics to a person or event in your life?

My grammar school and high school were founded in the tradition of the Sisters of Mercy. So for most of my formative years, when it came to "the faith," I was surrounded by the Mercy tradition. I always believed that faith was not just something we read about in school, but also something that had to inform the way we act, what we value, and how we order society. Praying for the hungry was never enough; we had to organize a food drive. More importantly, small acts of kindness were critically important -- but never enough. We were taught to think on the large scale about how society is ordered and that there was an ultimate common good that could be achieved.

Is it possible to talk about politics without considering the impact of legislation on people in different economic situations?

Is it possible? Certainly! Part of the problem with our current political stagnation is that a huge portion of our population is being left out of the process. If a community is not going to speak up for themselves, it's easy to write them off. The old adage stands true: "If you're not at the table, you're on the menu." So much of the current gridlock in Washington is the result of our lack of understanding of the face of America. We'd like to believe that there are only two kinds of Americans: the hard-working, honest people and the lazy "takers" who depend on government programs. We don't like to admit that America is much more diverse and the spectrum is much grander.

Faith surely demands of politics the upholding of justice. How do you feel about Catholicism's promotion of social justice teaching?

Social justice is at the core of all church teaching for me. It's the reality of taking what we have been taught and putting it into action in the world around us. James 2:20 sums it up perfectly: "Faith without works is dead." Praying for the afflicted is certainly important, but we also have a responsibility to do what is in our power to make a difference ourselves.

Do you envision ways to strengthen positive political influence?

At least in the American political context, we need to restore our notion of politics as "the art of the possible." Today, people of faith are getting increasingly turned off from the political process. When you look at almost any positive social change led through the political system, people of faith used to be at the forefront (civil rights, collective bargaining rights, economic equality, etc.). If people of faith stop working through the current system, they'll be missing a great opportunity to build a society ordered toward the common good.

Your office is in Washington, D.C., but you claim New Jersey as your home. Is that where you grew up?

I spent my whole childhood in New Jersey, came to Washington, D.C., to study at The Catholic University of America and have stayed since. I still consider New Jersey my home and return home often.

Please say something about your family, neighborhood and education.

I'm incredibly fortunate to have parents who put me and my sister before themselves and have constantly sacrificed to put us through quality Catholic education. I went to St. Ann's grammar school in Keansburg, N.J. (my hometown), and Red Bank Catholic High School, both schools in the Mercy tradition. By sending me to a Catholic school, my parents showed me that they were not just concerned with what I learned, but with the type of person I was going to become.

Did you (and do you still) have heroes or role models?

As clichéd as it sounds, it would be my parents. There's never a day that goes by when their generosity and selflessness cease to amaze me. They taught me that whenever someone asks for help, look to say yes.

I have a few favorites, mostly ones that originate the church's strong social justice teaching. But I would say one that stands out in particular is the beatitudes, especially when viewed in the political context. The beatitudes flip everything we assume about societal structure on its head and highlight the need to care for those on society's margins.

For me, prayer is both personal and communal. I spend time each day praying on my own, but I do also believe that work done in service to others, in communion with them, is prayer worked into action. I would, however, say that my favorite prayer is the Prayer of St. Francis, which I think sums up everything you need to know about living a Christian life.

I've enjoyed playing the piano ever since I was young. I'm also an avid reader.

You are young enough to have unfulfilled dreams. Any you would be willing to share with us?

Well, I'm very understanding of the fact that I have no idea what my life will look like tomorrow, let alone 10 years from now. However, I would like to say that I think public service is still a noble calling. My generation is facing a critical talent drain away from public service because young people see the process as "broken" or "ineffective" and turn instead to business and the private sector. I think there's still something noble about dedicating your life to the common good of politics.

Is there anything you wished I had asked?

I think you covered everything!

Thanks, John. I hope someone tracks you down 10 years from now. That might take them to the Oval Office!