Sherry Warden grew up in Ann Arbor, Mich., on the same street on which she's lived with her husband, Eric, since they married 45 years ago. Their two children, Evalyn and David, are on their own now. Evalyn has given her parents a granddaughter. 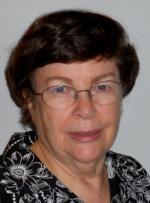 The University of Michigan always has been part of the family's lives. Sherry's father, Edward Stasheff, was a legendary, beloved professor, who came from New York with his wife, Evelyn Maher Stasheff, after a pioneering career in commercial television. He directed Bishop Fulton Sheen's first television program. "Prof," as he was affectionately known, came from a Jewish tradition. His parents sat shiva when he married someone from another faith.

But later, Sherry recalls, "When my dad's father was ill and my mother cared for him, my grandfather declared, 'She may be a shiksa but she has a Jewish heart.'"

Sherry brings an ecumenical disposition to life's experiences. Her desire to plumb important questions of faith and life motivated her, along with like-minded Eric, to establish a Catholic discussion group that has outlasted a string of pastors and other parish leaders. Sherry's parents exemplified the hospitable, inquisitive attitude that impacts her approach to issues, comfortable and controversial.

Camille: How did your Irish Catholic mother and formerly Jewish father adapt to differences?
My father was not practicing the Jewish faith after their marriage. My parents had agreed to raise their four children as Catholic and they did, but my father didn't go to church. My mother said she never even prayed for his conversion because she believed so strongly in the power of prayer that she didn't want to stack the cards against him. And if we came home and said, "Sister says Dad should be a Catholic," she got rather upset. She was astounded when he came home one night and told her he'd decided to become one.

You said your family respected both traditions. Was there any particular reflection of Judaism?
While living in New York, we attended a few Jewish feasts with my relatives. After his conversion and move to Ann Arbor, my dad led seders for various church groups. Later, after Eric and I married and attended St. Mary's, we started a discussion group. Eventually, my parents conducted seders for the group. Mass would follow this service, which made it even more meaningful.

Is there any Jewish practice you follow today?
Well, my favorite Scripture passage is "This is the day the Lord has made. Let us rejoice and be glad in it." For the past 20 years, I've walked nearly every day with Kathy, a Jewish friend. Lately she and I have practiced Mussar, a spiritual path that encourages us to work on spiritual traits, focusing on a different trait each week.

What is it that makes you grateful?
Well, first of all, I had very good parents who raised us well. They also were both kind to others. Many lived with us, including students who fell on hard times and couldn't afford to live on campus. They were known as "the Stasheffs' Waifs and Strays." My father was always happy to have someone with us. He loved an audience. My mother was a more private person. Still, she responded to a story about a friend from New York who had rescued her younger sister from a bad situation. They were living on the outskirts of town in a very poor house with no heat. My mother drove out to where they were staying and said, "Get your things and come live with us."

Another blessing is that I haven't had to work hard to get where I wanted to be. This included my majoring in speech correction at the University of Michigan and an opportunity to study for an M.S. at Gallaudet University to prepare me for teaching deaf students. At the time I started this, there were many Rubella babies. Grants were available to train teachers to help them.
I was also able to spend a year in Israel with my parents. My relationship with Eric developed by mail while I was so far away. We married soon after I returned home.

Do you feel you were able to bring your faith to your workplace?
Since my job involved students with special needs in their neighborhood schools, I felt that I had many opportunities to support them, their families and teachers, and my colleagues. In this way, I served God and my neighbor. Many deaf people have an easier time today because of the availability of cochlear implants and hearing aids. They are not so isolated. I also supported students with autism or cognitive impairments as they were included in general-education classrooms. I felt this work was my main contribution to society.

Although you and your husband have worked in different fields -- Eric in university administration, you in service to the deaf -- together you've created a discussion group that has been thriving for over 40 years.
We'd go to church and didn't really know people. We began it as a young couples' group. We meet each fall to come up with topics and guest speakers for our monthly meeting. We once had Hans Kung; another time, Bishop Tom Gumbleton. Fr. Dan Reim has spoken about social justice. We hope one of our priests, Dennis Dillon, S.J., can speak this year about his work with Dorothy Day. About 40 of us meet in people's homes or community rooms that can accommodate us. We begin with wine and snacks, have our meeting and discussion, and end with coffee and cake. When we were younger we were able to have Mass and often ended after midnight, but we can't stay up that late now!

What sustains your marriage?
The important thing about our marriage is how our lives have become braided together by such things as family events, trips with parents, my sister or our kids, long-term friendships and meetings with each other's co-workers. All that makes a kind of glue that holds a marriage together.

I feel life was easier for our generation than it is for today's young people. Many of us graduated from college without loans, found jobs easily and were able to stay in them for long careers. We were able afford a house. We also are well provided for with Social Security and pensions. I worry for our children, who don't have these advantages.

What is your image of God?
I still think of God as a parent, one who is loving and accepting, although still expecting us to do our best. As we began at church to refer to God by more gender-neutral terms, I thought of God less as a male figure and more as a spirit.

What about your faith is most meaningful to you?
The Liturgy, the Eucharist, and the long history of the Catholic faith. I see faith in action in some of my family members and in some of our people in our church, and especially in people like Fr. Tom Firestone, St. Mary's last pastor.

What does the Incarnation mean to you?
I appreciate that Jesus shared our human experiences, joys and suffering.

What does Christianity demand of you?
It demands that I love others and work for justice. I don't think that I meet these demands as much as I could.

What do you want for your children?
I wish they were still involved with the church. Our daughter regards herself as Catholic but rarely attends church, and our son has left the church.

Does anything in Catholicism distress you?
I am distressed by the lack of response by the hierarchy to the laity, both in our local area and in the national and international Church. I am also concerned by the lack of ordination for women and the child abuse scandal.

What do you want from Catholicism?
I want to be part of a spiritual community through my church. I look forward to receiving support from it and our local community. As I approach death, I want the person who says my funeral Mass to know me before then!

Sister of Charity's ministry has always involved serving the vulnerable

Mercy sister teaches about the Holocaust to prevent indifference

Helen Garvey: The sisters loved one another, so she joined