Deacon, 84, continues mission in book after arrest for T-shirt 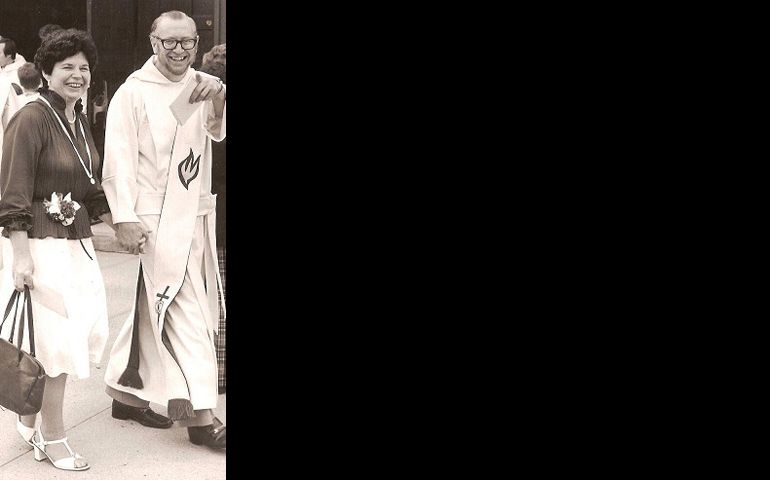 After the sudden death of his wife of 59 years, Marie, in May 2011, Don Zirkel wrote a book he says Marie helped co-author from her privileged place in the next world as well as her permanent place in his mind and heart.

Couple Power describes the conviction that their marriage in 1952 created a new entity. Besides their individual causes and commitments, they bring a joint energy to the problems of the day.

While raising nine children, they've been activists in what they call the New Church, applying their energy as creative liturgists, protest organizers, listeners and public speakers. Marie was a travel agent and sing-along pianist. Don, who doesn't sing, is an editor and preacher. After a career in the Catholic press, including 17 years as editor of The Tablet, the newspaper of the Diocese of Brooklyn, he was recruited by Gov. Mario Cuomo to serve as an official of the New York State Division of Human Rights.

Marie was active on the picket lines and the frontlines. She worked in several parishes to help people who needed food, clothing, housing, encouragement and reasons for hope. Together, Don and Marie, nicknamed Re, have been champions of victims of discrimination of race, color, age, gender and sexual orientation.

I think your second option requires an explanation. I have no doubt that you have one.

Asked at a youth retreat to give an example of solidarity with the poor, I suggested eating like they often do -- discarding little, saving leftovers, stale bread and pre-historic cheese, after cutting off the green part. The kids gave me a new nickname.

How would you describe yourself?

I know better than to try to flesh out all those descriptors. Let's move to safer ground. Do you have a favorite Scripture passage?

Neither do I condemn you. Go and do likewise. I have come that you may have joy to the fullest. The Lord is not in the wind or earthquake or fire, but in a tiny whispering sound.

What describes your God?

How great thou art! So quick to forgive! She speaks to us through people, from the top down, the fringes in, the lost, the least and the lonely. Oh, what a friend we have in Jesus!

Has your image of God changed over the years?

As a result of our shared prayers and reflection, it was turned downside up. Re says it so well in our book:

"My image of Her has certainly changed. Too bad there isn't a neutral pronoun to discuss it. The God of my youth was masculine. Looking back, so was the world. Since the days of the caveman it was brute strength that gave authority. Jesus was never macho. He blessed peacemakers, not warriors. He forgave easily and said, 'Learn of me, for I am meek and gentle of heart.' Those are feminine virtues. Don't send the hungry away empty, Jesus said; feed them yourselves. That's women's work."

My God is a God of surprises who lives outside the box. Wash feet as a sign of service. Love your enemies. Forgive seven times 70. (When I asked if God knew what a gigantic number that was, 490, the Teacher smiled and said yes.) Do not store up treasures on earth. Don't even wonder about what you are to eat or wear. Look at the birds of the air; the Father takes care of them.

What else have you learned from Jesus?

Jesus wasn't hung up on outdated laws or on sex. He ate with outcasts, revealed that prostitutes would get to Heaven before those who cry out, "Lord, Lord."

My God is a liberation theologian who has a preferential option for the poor, and for peace makers, and those who take the lower seats. There's only one question on the final exam: Did you love the least of my people?

What about your faith guides you?

After prayer, spiritual reading and consultation, I can go forth in utter confidence.

Who most influenced your belief system?

They presented such a clear and beautiful picture of God's plan for his family, shared how they lived and loved even in difficult situations. The four-day experience was a conversion for me.

What are your favorite prayers?

First, "Why me, Lord?" Not because of the problems in my life, but because of the countless blessings that have cascaded on it. Why, indeed? Methinks the Holy One didn't want me to spend time griping when I could be building up the kingdom, nurturing, comforting, listening, consoling, healing and forgiving. And hugging.

Second, "Thy will be done." For myself, I embrace the few crosses I have had to carry. My prayer for others is sometimes a little longer: "Thy will be done but, if you haven't made up your mind yet, I have a suggestion."

What experiences, delightful or devastating, influenced your faith?

What in contemporary Catholicism encourages you?

You and your wife recognized the insights children have. Surely you learned from many in addition to your own nine children and 26 grandchildren.

Re and I were preaching at a children's Mass, and she asked what they would do if they had more than they needed and other kids had less. "Share," they shouted out. "Give some away." Obviously, they had been prepared. Obviously, they can be prepared. Let's do it.

A parish that vehemently discourages holding hands at the "Our Father." The grievous sin of the new liturgy translation, bureaucracy, diocesan newspapers, attempts to reverse Vatican II, clericalism, obsession with birth control.

Is there anything you would change?

Is this a joke question?

Is there anything you would not change?

Better question. If I had my life to live over again, I would. Same sweetheart, family and friends. Same church, native land and career. Similar approach to authority and freedom.

What causes you sorrow?

Your protesting the war in Iraq got you arrested a few years ago. You were having coffee with some friends. The problem, as local media widely reported, wasn't the coffee. It was your shirt that proclaimed, "4,000 troops, 1 million Iraqis dead." How did that happen?

When the Smith Haven Mall called the cops and ordered me to take off my peace shirt, I refused and was handcuffed. The warrant said "The people of the State of New York vs. Don Zirkel." There are 19,297,729 of them. I felt outnumbered.

The media reported your refusal to accompany the police as they requested. You accepted being transported by wheelchair to the paddy wagon. Along the way, you told onlookers that your refusal to remove your shirt was a matter of conscience. What happened next?

Robin Finn, writing in The New York Times, correctly said that I had fond memories of the two hours I spent handcuffed to the wall of a holding pen in the police station. I hardly ever have that much time on my hands to pray uninterrupted.

Is it true that after you were charged with criminal trespass and resisting arrest, you congratulated your hosts for their admirable behavior during your arrest, booking and detention?

Yes, that's true. And I went home with a clear conscience. As usual.

I interrupted your response to my question about what causes you sorrow. Please continue.

Bias and discrimination. That so many good people turn to abortion. That of all the countries in the free world, the U.S. (despite its claim of No Child Left Behind) is last in assistance to children in religious schools. Mistreatment of the least among us -- people of color, women, homosexuals. The immorality and insanity of expecting the poor, rather than mega-billionaires, to balance budgets.

The shortage of priests and the failure of the church to discuss the ban on the ordination of women and the exclusion of people who have committed the sin of marriage. Celibacy is a value that will continue to be recognized, but mandatory celibacy is already decreasing, almost in proportion to the increase in the married diaconate. The availability of the Eucharist, which Jesus established, ought to be recognized as more important than involuntary celibacy, which Jesus ignored.

The inability to find a nearby restaurant that does linguini carbonara well.

What gives you joy?

Being in the presence of good people. The growth and potential of our 40 descendants. Conversion (including my own). Marital sex (including our own). Parents (including me) and bishops and theologians who still listen and learn. Volunteers. Creative listeners. Rejection of the elitist idea that lay ministers of the Eucharist should wear special frocks. Diaconate opportunities, including preaching.

What do you want from our faith for your children and grandchildren?

Guidance, encouragement, freedom of conscience, as many opportunities for men as for women.

We have a family tradition of reaching out. There are two ways to help: one-on-one and in groups. Be ready to respond spontaneously and sometimes after research and planning. The Mafia is organized evil. Religion can provide organized good.

If you're an editor, lawyer or accountant from 9 to 5, forget about it at home. Love so much that you don't have time to nitpick or carp or nag. Persevere. (If at first you don't succeed, bungee jumping is not for you. Understand the gravity of the situation. Don't jump to conclusions.)

Tithe. God will not be outdone in generosity. Never throw out usable clothes. Peg-leg pants, bell bottom trousers and fedoras may come back in style. Even spats, but I hope not. Please turn out the lights in empty rooms. Risk-taking accomplishes more than worrying. Sometimes it is better to act first and ask permission later.

How should your epitaph read?

He did it His way.

Yes, "How many people have you been seriously in love with?"

Fair enough. How many?

More than a dozen names come quickly to mind.

Couple Power is available in some public and university libraries. A limited number of copies can be had for a donation of $30 to the Zirkels' favorite charity, Miraculous Medal Parish Outreach, Straight Path, Wyandanch NY 11798.

Deacon, 84, continues mission in book after arrest for T-shirt

After two attempts to become a sister, woman lives passion through religious education