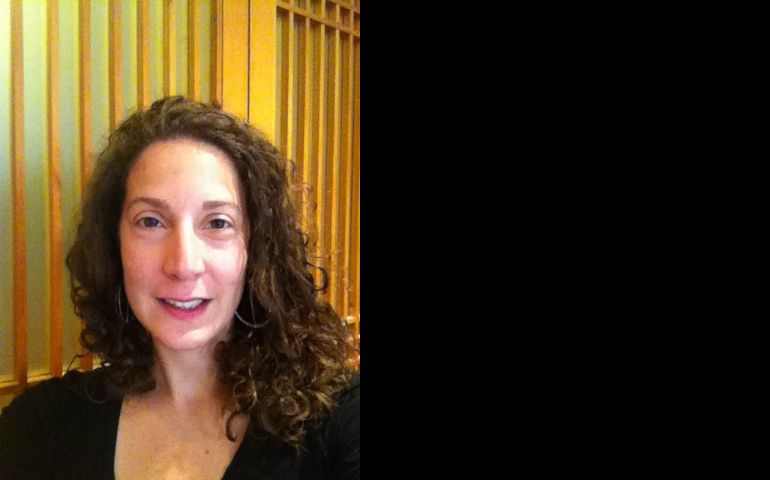 As co-founder and co-director of Common Law Inc., Karen Gargamelli works to prevent evictions and foreclosures and shares with the late Dorothy Day a vision of hospitality that would reduce the number of people who live on the streets.

Day used to say there would be no homeless people if families would invite someone on the streets to live with them. Our tendency is to put up a column of red flags, citing special needs of some homeless individuals and safety concerns for family members. But surely there are some circumstances that would work, bringing blessings on both givers and receivers of such hospitality. Gargamelli, 31, is promoting a project that would unite laypeople, members of religious communities and individuals needing homes.

Sr. Camille: Is this a new idea for you?

Gargamelli: No. God planted this idea in my heart years ago. I have nourished this idea for years with prayer, study and conversation.

Did any experience give a specific form to your proposal?

In 2003, I joined Dominican Volunteers USA, a program that pairs college graduates with Dominican sisters across the United States. I lived with (and to this day am very close with) three Amityville Dominican sisters. I was 22 years old at the time, and soaked up the Dominican traditions, charisms and community life. While living in the convent, I was struck by the number of empty rooms within our home. I knew others could benefit from closeness to the sisters, and I believed these rooms should provide shelter for those in need. I wondered if laypeople could be of assistance to the sisters and imagined a small, mutually enriching community.

Did you ever considering entering that or any other religious community?

I have long felt most happy when I am available to and intimate with many people rather than one person. I am happiest when I engage in regular prayer and meditation. I am most fulfilled when I am seeking justice and living simply. As for the call, that voice that is not your own but more familiar: Yes, I have heard it before, but still look for its manifestation.

What happened after that year of volunteering?

I entered the City University of New York School of Law and began volunteering at the Catholic Worker. Since 2005, I have volunteered one day a week at Maryhouse in Manhattan. From the workers, I learned about personalism and the importance of resisting institutionalization and corporatization.

And Jesuit Fr. George Anderson, a mutual friend and close friend of the Catholic Worker, told me about you.

George Anderson is an important person to many. He is important not because he elevates himself or exerts authority over others. He is important because he affects us; he changes our lives. He is a thoughtful friend, a moral priest and a gentle person. So many at the Worker, myself among them, are grateful for his participation in community life.

Did you finish law school?

Yes. Upon graduating in 2007, two friends and I launched an organization called Common Law to offer free legal education and legal assistance to low-income New Yorkers. The goal of our legal work is to increase and support community organizing and activism. In the last five years, we've assisted hundreds of New Yorkers, among them undocumented workers, homeowners facing foreclosure, and tenants facing eviction.

Can you explain your strong desire to provide safe harbors for endangered people?

Since the very beginning of my faith journey in New York, my country has waged war in the Middle East. The war has been a backdrop to my entire adult life. I believe God is calling me to acknowledge our daily destruction, to make peace and to bring healing.

How does a war waged so far away influence your life choices?

In the last few years, I've met Iraqi refugees passing through Maryhouse Catholic Worker. Some have shared stories of destroyed homes and homeland, family members murdered or kidnapped. Many of the Iraqis living here in America are further traumatized by isolation as they struggle to grasp our culture and language. I am well aware that my daily routines -- consuming oil, paying taxes -- contribute to this violence.

The problem seems overwhelming. Doesn't it make you feel powerless?

Hospitality makes sense to me. Recently, a young Iraqi woman with whom I'd been corresponding came to New York to apply for asylum. I've welcomed her into my home and my life, trusting that God can carve a "Christ room" out of a studio apartment in Queens. She now lives and helps out at the Catholic Worker. We have continued to deepen and enjoy our friendship.

That seems to place a heavy burden on a small space! What would you do if you had a bigger place?

There are many other refugees living in isolation -- older single women, mothers and their children -- who could form community with her and with lay Catholics and vowed religious. We have so much to learn from each other!

Do you have more of a plan?

I'm specifically seeking to rent a few rooms (for myself, my friend, and perhaps one or two more people) in a convent with a community of vowed religious. In time, I should like to build an intentionally small community with no more than two or three lay Catholics and no more than five others in need of home and community. I am seeking a religious community willing to join me in this ministry.

Although my nuclear family is just four people, my understanding of family included grandparents, aunts, uncles and cousins. Our Italian-American heritage and identity was important to the entire family, and our Catholic faith ordered our way of life. The liturgical seasons were meaningful; Lent and Advent shifted our daily lives. My brother and I were altar servers (I was among the first girl servers at our parish) and both of us served on the parish council. My father was a construction worker and my mother, a Catholic school teacher. We never went without, but I knew it was only because my parents were extremely careful with their (hard-earned) money and focused on providing for their children.

I attended St. Mary School in Branford, Conn., and Hopkins High School, a secular but private institution, in New Haven. I purposely sought a university that could provide me with rigorous theology and philosophy courses and attended the Jesuit Loyola University, Chicago. I credit the Jesuits for linking the works of mercy with activism. As described above, I also attended CUNY School of Law -- my first and only choice because of CUNY's radical roots and continued focus on public interest.

Did you have any heroes, heroines or role models while you were growing up?

As a child, I loved the saints: Lucy, Catherine of Siena and Elizabeth of Hungary. Because Yankee baseball was not far behind religion in our house, I also admired Don Mattingly and, later, Bernie Williams. Two movies (surprisingly, Disney creations) were childhood favorites and influential: "Robin Hood" and "Newsies," a tribute to paperboys who went on strike in 1899. The message of those films -- that people united can overcome even the meanest and wealthiest of despots -- excited me. The films' emphasis on organizing and mobilizing fit so well with the concepts repeated throughout my childhood: resurrection and teamwork.

I nuzzle my way into the communities with the people I most want to emulate -- the Catholic Worker, my Amityville Dominican sisters, networks of housing activists here in the city. My mother and my law partner can always set me straight, neither of them complainers nor willing to suffer fools.

I can conjure the form of Jesus readily. Mary (who secures my faith) looks like a statue of Our Lady of Mt. Carmel in West Haven, Conn. The Holy Spirit has been felt -- a flush of warmth in my chest or a rush of clarity of mind. God the father is a tricky one -- most often, in my mind's eye, too vast for form. There have been moments, however, when I saw him as an old Italian man with a cap, feeding pigeons or taking a stroll.

Has it changed over time?

When I was younger, I pictured myself before the throne of God, asking for blessing and a commission. These days, I'm interacting with God on the journey -- in a boat or on a donkey, walking in the desert. I get a kick out of these spiritual images and visions: I can barely swim, never rode an animal and have more or less stayed in the tri-state area, in our marshy and wooded terrain. Yet God so clearly presents to me as navigator. (Dare I say co-pilot?) There is not a specific form with me on these mental excursions, simply a presence.

Do you have a favorite scripture passage or parable?

I am always startled by Ecclesiastes 1: 2-11. Vanity of Vanities! Nothing is new under the sun! I am reminded that the struggle for justice (food equality, race reparations, housing as a human right) and personal and interpersonal struggles (loneliness, jealousy, insecurity) are ancient struggles. None of this is unique to our age or to us as individuals.

Does your appreciation of it affect your life?

I am reminded that I cannot be goal-oriented, or I risk the endless run on the hamster wheel. I must ask God for a bigger vision, a longer understanding.

Where do you worship?

How do you pray?

I try to follow this simple formula daily before collapsing into bed and nodding off: praising God; acknowledging my failures and any harm I have caused; thanking God for the many blessings I have received; and asking for mercy for myself and others. As a treat, I attend Taizé prayer services. Song is such a physical way of praying; it can distribute prayer to our whole bodies.

What do you look for in your friends?

Most of my close friends are powerful women of faith, working to bring about justice and peace. I seek the ones who like to laugh at themselves and their mistakes.

What changes do you think would improve the church?

The big three: women's ordination, recognition that gay love is love, and a restoration of equilibrium -- the same attention to "protecting life" and "fighting for the poor."

I'd like it to include a home where an intentional community thrives: prayer-driven, offering hospitality, working for social change and, occasionally, watching the Yankees.

[Mercy Sr. Camille D'Arienzo, broadcaster and author, narrates Stories of Forgiveness, a book about people whose experiences have caused them to consider the possibilities of extending or accepting forgiveness. The audio book is available through the book's website, storiesofforgiveness.com.]

Sr. Mary Mundy is a fourth-generation Sister of Providence