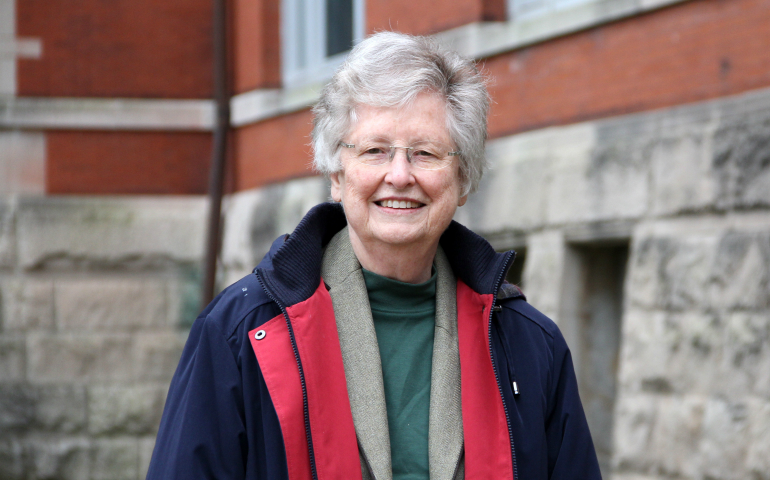 Helen Garvey
Member of: Sisters of Charity of the Blessed Virgin Mary
Lives in: Dubuque, Iowa

D'Arienzo: Where and with whom did grow up?

Garvey: I grew up in Hempstead, Long Island. My father, Clarence Garvey, was born on the east end of Long Island on a potato farm with his 13 siblings. My father's era contrasts sharply with the current reality of the east end which has become somewhat a playground for the rich. My mother and her one brother belonged to an upper class Irish family in the Bronx. My parent's marriage was an interesting blend of cultures which later included the devastation of the depression during which my parents lost the farm. They were both active in parish life and my mother was an extraordinarily spiritual person blessing our home with a spirit of prayer.

Our four aunts enriched our family life with their presence and care. These single schoolteachers had a large vision for their nieces and nephews, education, education, education which at 13 or 14 years of age, we did not fully appreciate. Instead of dolls and baseballs, they brought us flashcards and books stamped, 'Brooklyn Board of Education, do not remove from school under possibility of prosecution.'

Our summers always included a few weeks at my aunts' home in Cutchogue, Long Island. With our cousins, we did the summer things of swimming, playing ball, and of course working those flash cards.

I attended Our Lady of Loretto School in Hempstead, Long Island administered by the Sisters of Charity of the Blessed Virgin Mary (BVM's) and St. Agnes Academic High School in Rockville Centre operated by the Dominican Sisters of Amityville. Later I graduated from Clarke College in Dubuque, IA, and Columbia University in New York City.

My friends in high school included my old grade school pals who traveled daily with me on the Semke bus from Hempstead to Rockville Centre. We travelers benefited from the outstanding scholarship of the Amityville Dominicans as we lugged the required book bag and wore the beloved oxfords. On the bus we reviewed the activities of the day with the sage analysis of 15-year-olds. Playing on the parish CYO basketball team, our records were undistinguished, but our camaraderie was heartfelt.

This epoch typified the world of a Catholic kid from a large family whose center of life was the family, the parish and the neighborhood.

What attracted you to your religious community?

There was vibrancy, a life among the BVM sisters. I could not have named it as a young person, but it was clear that the sisters enjoyed one another, loved one another. It was good to be around them and to be part of that life.

How did your family react to your decision to enter religious life?

My family is Irish Catholic, so religious life was familiar and comfortable with them. My older sister was already in religious life as an Ursuline sister, and happily so. My family supported my decision, although the 'mission' land of Iowa was unfamiliar and challenging. On the week that I entered BVM congregation, my father brought a bushel of peaches to the Hempstead Convent. The sister answering the door, exclaimed, 'All this and Helen too.'

What are the major works of your religious community?

Originally, the BVM congregation focused on education, with schools from New York to Hawaii. While education is still a core value for us, new ministries have flourished since Vatican II. Sisters can be found in prison ministry, parish administration in law offices and beyond.

What ministries have you engaged in?

Like most of our sisters, I began my ministry in teaching. My first assignment was located in the northwest side of Chicago in St. Ferdinand's Parish in the sixth grade. My class of 60 lively, inquisitive, and lovable kids provided the setting for my early formation as a religious and as a minister.

Later I served as teacher in Antioch, Ill., Fort Dodge, Iowa, and West Hempstead, N.Y. Following administration in in Bellerose, N.Y., I spent several years in study at Columbia University, before serving as principal in Hempstead, N.Y.

After my years in education I was elected to leadership in my congregation and spent 16 years in congregational administration. During this period of leadership, I also served in the presidency of the Leadership Conference of Women Religious (LCWR). After leadership, I had a desire to be closer to ordinary parish life, and worked in the mission Diocese of Lexington, Ky., as director of pastoral services.

Accepting an invitation from the LCWR, I became the coordinator of the exhibition, 'Women & Spirit: Catholic Sisters in America,' which described the contribution of women religious to the history and culture of the United States In all of my ministries the people, Catholic and interfaith, lay, clergy and religious were the catalyst for my formation as a religious and as a minister.

At present I am enjoying semi-retirement, serving on the board of National Catholic Reporter, working on committees and doing some facilitating with religious communities.

Which were most satisfying?

It is impossible to pick a most satisfying ministry, since each one of them brought rich relationships as well as weird challenges. In these ministries, I was part of a community responding bravely to the call of Vatican II: to renew according to the Gospel, the charism of our community and the signs of the times.

Please give an example.

At St. Ferdinand's in Chicago, I remember 1,200 students stepping with military discipline to the music of a Sousa march at dismissal time. I was always hoping that one of my students was not violating all the principles of military marching as they exited the building under the watchful eye of the principal and other teachers.

Another ethos was developing in the convent where the age-old structure of sitting by rank in the dining room gave way to non-hierarchical culture, sitting at the dining room table as equals. 'This won't last,' an older sister told me.

At St. Peter's in Antioch Ill., I watched impatiently while our good pastor, Alfred J. Henderson, wrote the words 'Ecumenical Council' on the board. I was intrigued with my own presentation on division of fractions, while he was opening me to a world-changing event.

In West Hempstead, N.Y., the possibilities of collaboration emerged when six junior high school teachers struggled over weekends with the new math and the grammatical discovery of phonemes. We did it together while grappling with the newly published documents of Vatican II, often traveling after school to Union Theological or Fordham for a presentation by a Council expert, like Hans Küng.

In Kentucky, the joy of working with the bluegrass and Appalachian people was a community affair, ruptured when a new bishop terminated the four women in decision making positions in the diocese.

What effect did the exhibition, 'Women & Spirit: Catholic Sisters in America' have on you?

It taught me a deeper reverence and love for Catholic sisters who significantly helped to develop the history and culture of this nation since 1727. This experience broadened and deepened my knowledge and understanding of women religious. How else would I know that three Sisters of Charity of the Incarnate Word tied themselves with a clothesline to 100 children as they crashed to their death in the great storm? The place was Galveston Texas; the date is September 8, 1900.

At the same time, the exhibition demonstrated the essential value of collaboration. There would be no exhibition about sisters without the devotion and skill of our partners in Seruto & Company.

What years were you president of the LCWR?

How did that affect you?

LCWR, continuing the formation of my own community, broadened my horizons, challenged my preconceptions, and opened me to new relationships. It gave me a deeper sense of the church's mission, flowing from the foundational mission of Jesus. It deepened my consciousness of the dignity of women and the necessity of their full incorporation into the life of the church.

In negotiating with the Vatican, I learned that conflict challenges us to fidelity and integrity. In representing U.S. women religious, we had a responsibility to represent them with integrity and candor balanced with an obligation to reverence the long term good of the church, the people of God. Our present LCWR leaders have modeled a contemplative stance which serves women religious and the church as an enlightened approach to conflict.

Who are you main collaborators?

My main collaborators change depending on the project. It may be my own community members if it is a BVM project, or members of a different community if I am consulting, or a mixed group, if it is a board. What is clear is that you cannot work alone. You certainly need to have personal time to study and to analyze, but the fruit of that experience must be tested in the wisdom and discipline of the group.

What contemporary issues concern you?

Where to start? The irrational hatred of the stranger. The poisoning of the political process through the Supreme Court's decision, Citizens United, to allow corporations to act as persons in contributing to elections, and to remove restrictions on corporate contributions to elections

Are you involved in them?

What would you say to a woman contemplating religious life?

Do you have a favorite Scripture passage and method of praying?

'The love of God is poured into our hearts through the Holy Spirit who is given to us.' Romans 5:5

Does your religious community welcome associates?

How does that affect the vowed members?

It enriches vowed members as well as associates; it is important that each group maintain its identity. If the groups tend to homogenization, it detracts from both groups.

What do the associates gain from that connection?

Associates gain the charism of the community, its mission and its relationships.

I am a reader. I love to discuss politics, or at least I used to, before the discussion became so rancorous. I enjoy a cup of coffee with a friend or refreshments with a group of friends. When I was in Lexington, a group of women religious met every other Friday night to test the local margaritas and to reform ourselves, our diocese and the country.

The Brooklyn Dodgers and the New York Giants should never have left Brooklyn and New York. Yes, my New York friends and family, there is life beyond the Hudson. The full incorporation of women into the life of the church is critical to its life and its integrity. Religious life is the richest of possibilities. I am filled with gratitude.