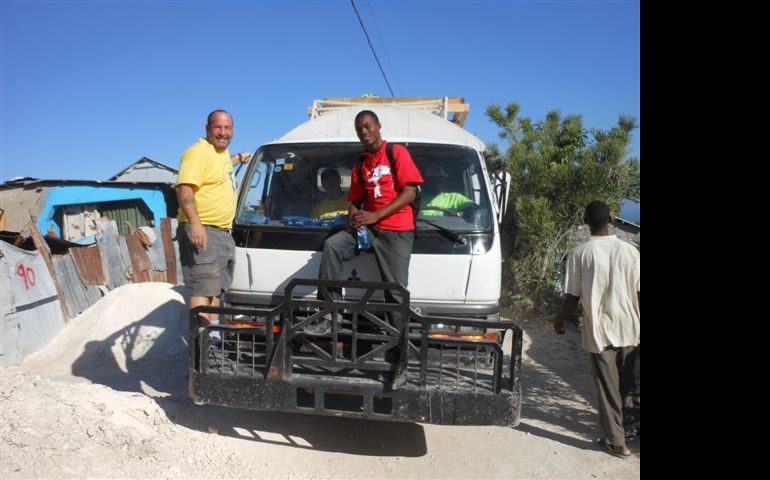 Here's what I know about Charlie Cicio so far: He's a retired New York City police officer who then became his daughter's Mr. Mom for 13 years. He's now a full-time volunteer in projects helping poor people on Long Island and in Haiti. I first met Charlie a few weeks ago when Fr. Bill Brisotti, after Mass in Our Lady of the Miraculous Medal Church in Wyandanch, Long Island's poorest town, invited him to update the congregation on the work he'd just completed in Haiti.

Sr. Camille: Let's begin with your career as a police officer.

Cicio: After nine years as a police officer -- a job I very much loved -- a back and knee injury forced me to retire in 1991.

What did you love about that stressful work?

I loved being able to help people, even though I never knew what the next day or hour would bring.

What in your faith inspires you to care about others?

I credit being in Catholic school for eight years and having a teacher like Sr. Sophia Heimbubher, an Amityville Dominican, in the fifth grade. She always taught us to spend time helping others.

How have you followed her teaching?

I've been a volunteer most of my life, with the Boy Scouts, cutting neighbors' lawns and removing snow for neighbors and relatives (receiving in return homemade cookies, cake and an occasional six-pack left at my door). I serve as an usher and a volunteer firefighter. But what really inspires me is the amount of divine intervention that has come my way. I need at times to explain to people that I'm no holy roller. I'm just a person who lives in a glass house and who enjoys helping those that need help. If God has a sense of humor, he must have had a wonderful time with me.

You travel to Haiti to install latrines for poor people who can't afford them. How often do you go? With whom? What are your helpers like?

My first trip to Haiti was six months before the 2010 earthquake and again six months after it devastated that island. I go with a group called the Friar Suppliers. A friend named Charlie Moran began by helping the Brothers and Sisters of the Franciscan Friars of the Renewal. He then got involved helping a Catholic church in Port au Prince, Haiti. Since the earthquake, we've connected with a second church that was also devastated.

Charlie Moran's mission has three parts. First, a medical team brings doctors and nurses. These usually see more than a thousand people in the course of the week. A third are very sick children.

Second is a food mission that Charlie has let me run for the last three trips that provides about 700 households with rice, beans, pasta, sugar and oil. Thanks to the parishioners of OLMM in Wyandanch, the Babylon Rotary Club and other organizations, we're able to purchase that food in Haiti.

The third part of the trip entails home repair. Since the earthquake, we've been able to fix or build new roofs for more than 200 houses, along with the church's roof with the help of a member of the Knights of Columbus in Wyandanch. The church had provided a refuge for the people during the earthquake. Its pastor said it saved lives.

Our current project is providing latrines. Last year, we built 150 of them, and this year we constructed another 150 in less than a week. These sanitary facilities have helped stop the spread of cholera in the area. We've been joined by volunteers from as far away as Vermont and Minnesota. We travel with a Franciscan priest, some brothers and sisters, doctors and nurses. We also pay more than 50 Haitians to work with us.

I know you remain active at home. What haven't you told us?

I've been a volunteer at The Mercy Inn soup kitchen for almost 10 years; for the last eight, I've been the Monday coordinator. We provide meals and hospitality for the poor of Wyandanch, and for the last seven years I've helped in OLMM's outreach office. After a devastating fire at the Gerald J. Ryan Outreach Center, I stepped up to become the volunteer food coordinator. Now that they have a new building, I've moved away to let paid staff run the program.

I also help other groups that give out food and clothing on the streets at night in several depressed towns on Long Island.

I can't imagine that you, as a fifth-grader in Sister Sophia's class, ever imagined how much you'd be doing to help others. Where and with whom did you grow up?

My father, Joseph, was a linotype operator in Manhattan. When that work stopped and he was forced to retire, he took up a job as a janitor in a local school to keep our medical benefits. He also worked in the post office at Christmas time.

My mother, Florence, was a stay-at-home mom until Dad retired, then she worked in a cafeteria in a local school until a third bout with cancer took her life in 1995.

I have a younger brother, Joseph, who lives in Plano, Texas, with his daughter, Chelsea. I also have a sister, Marie, who lives on Long Island with her husband, Joe, and their sons, John and Steven.

In addition to my daughter, Julianne Florence, I have two stepchildren -- a daughter, Alena, who lives with her husband and sons on Long Island and a stepson who lives in Florida.

Who supports your many activities for the less fortunate?

The parishioners of OLMM in Wyandanch, the Babylon Rotary, the North Lindenhurst and Wyandanch fire departments, politicians from the town of Babylon, several Jewish temples and a lot of crazy friends who wish they had the free time I have to do the things I do for the rest of the world.

My girlfriend, Gail, and daughter, Julianne, are my biggest supporters. They are amazed at what I do, how I get it started and where it goes.

What gives you greatest satisfaction?

Being able to do things that never in my wildest dreams did I ever think about doing or could do.

How do you pray? Do you have a favorite prayer?

Every night when I go to bed I just talk to God and thank him for watching over and protecting my friends, family, daughter and myself this day, and I ask him to help me to get through another day and become a better person. I also like the Serenity Prayer and I'm a BIG believer in the rosary.

From the police department to the soup kitchen, you surely have had experiences that saddened you and others that gave you joy. What comes to you now?

John was a crackhead in Wyandanch. One day, he came into the soup kitchen cursing up a storm because his brother was hanging out with a fake doctor who said he was a rabbi (he was not) who was HIV positive and a drug dealer and gay. I had to explain to John (who was taller than 6 feet, so I stood on top of a table) that even though this is a soup kitchen, we're still in God's house, and he shouldn't talk that way. After several minutes, John explained that one drug addict in the family was enough and that his mother didn't need another one. John finally left. He was on drugs that day, but I understood what he was saying. Several weeks later, John found me before the soup kitchen was opened for lunch. He was high and was crying. His mother had passed away the day before and he wanted to know why. I talked to him for a while, explaining that his mother was in heaven and that she was watching over him now. He said he believed me because of the way I treated him some weeks ago in the soup kitchen when he was upset with his brother.

What do you find helpful or consoling as you reach out to others?

Whether in Haiti or Wyandanch, I take comfort when friends help me. I'm grateful when a child or a mother comes in tears and says thank you for the food or the Christmas toys, because if it were not for people like me, they wouldn't eat today or tomorrow, as they hadn't eaten yesterday. A mother says, "You guys put toys under my tree so my children will have a good Christmas and you provided a gift card to a supermarket so we can enjoy a dinner. Thank you so, so much." Or when one of my elves goes to a house with a Christmas tree and gifts and her 10- year-old daughter asks if next year they can deliver a tree and gifts to someone again who doesn't have them.

Or when I pick up the phone and call my friends Gail, Leslie, John, Tom, Chris, Mike and others and tell them about someone in need of food, or oil, gas or wood for the fireplace to keep warm. They never let me down. They place the order and most times, they don't know the person in need, and the person in need doesn't know them. We all laugh and keep most of the stories to ourselves. What a great feeling!

I'd like divine mercy to be better explained to the parishioners. I've observed it for the last five years, from Good Friday until Divine Mercy Sunday.

What do you hope for your children?

That my 22-year-old daughter, Julianne, and her generation will see what I do as a volunteer and, when they get older, help those who need it, not just on Thanksgiving Day and Christmas Day, but much more often. Not money, but hands-on. I believe we never stand so tall as when we stoop to help a child.

While Charlie was answering my questions, his phone rang. Afterward, he explained: "The Lindenhurst Knights of Columbus Squires called to say they have over 100 new coats for children and 40 for adults. I'll be giving them out in the streets two days this week. This is the way it has been for years now."

And Charlie Cicio, at an energetic 55, looks forward to many more years of making life better for others.

Thank you, Sister Sophia, as you smile on this student from your heavenly dwelling place.

Editor's note: We can send you an email alert every time Sr. Camille's column, "Conversations with Sr. Camille," is posted. Go to this page and follow directions: Email alert sign-up.

Mercy Home for Children's executive director is fulfilled in her work