Seminarian: Priests need the People of God to affirm, challenge, correct them 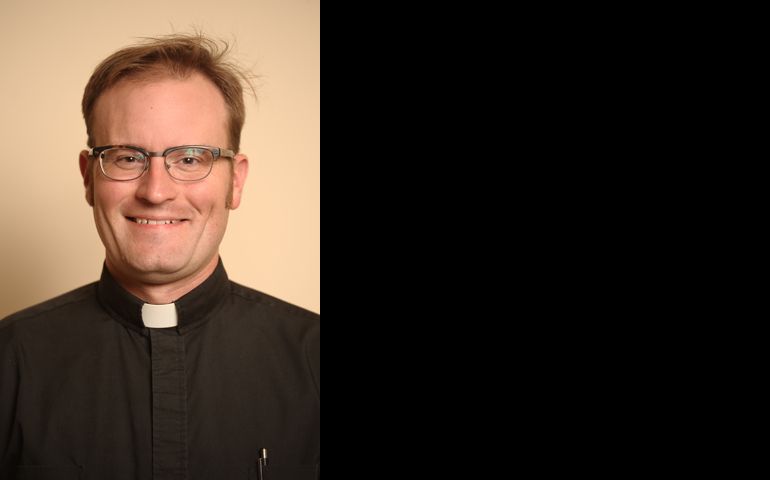 John Gribowich
Who he is: Transitional deacon for the diocese of Brooklyn, N.Y.
Lives in: Brooklyn

Sr. Camille: Fr. Michael Perry, who recommended you for this conversation, has a very good sense of people. So here I am, contacting you the week after your ordination to the transitional diaconate, eager to learn about you and the journey you're on.

But first, how did you get to meet Father Perry and what influence has he had on you?

Gribowich: When I was applying to study for the priesthood in the diocese of Brooklyn, I was living at the diocesan house of discernment. The vocation director wanted all of the men in the house to be associated with a parish other than their home parish. He suggested I reach out to Father Perry. Both Father Perry and I had a similar background. We were both involved in the Catholic Worker movement, and Father had been at Pratt Institute as a chaplain. While I was at the discernment house, I was a graduate student at Pratt studying art history. Plus, we are both of Ukrainian descent. So we hit it off from the get-go!

Where and with whom did you spend your childhood?

I grew up outside of Philadelphia. I was an only child, and I was extremely close to my parents and my grandparents on my mom's side. (My dad's parents died before I was born.) I especially loved spending Sunday evenings with my parents, my aunt and uncle, and my cousins at my grandparents' house.

Who were the most influential people in your life?

Clearly, my parents and grandparents played a major role in my upbringing. I was also close to my parish priests, high school teachers, and college professors. From afar, I was very much influenced by the lives of Dorothy Day, Mother Teresa, and Pope John Paul II. I grew up with a great Catholic sense.

How would you rate yourself as a student?

I was above-average in grade school and high school, but once I got to college, I began to really take my education seriously. A passion for learning began to grow within me, and it continues to grow to this day.

Did you have any memorable teachers?

Sr. Dennis Ann, my eighth-grade teacher. I often joked that I was ready for college following her class! Mrs. Sandra Shea, my American history teacher in high school. She was just so passionate about what she was teaching that it made me want to be totally into the subject matter as well. I had incredible professors in college and grad school. Dr. Larry Chapp instilled in me a deep love for studying theology and Dr. Carmina Chapp (his wife, both professors at DeSales) introduced me to the writings of Dorothy Day. My art history thesis director, Dr. Diana Gisolfi, is an inspiring scholar who synthesized art and theology so well.

Can you track your personal faith formation?

As I mentioned, growing up, I had a great Catholic sense. My parents and grandparents introduced me to the devotional life of the church. Initially, I was attracted to the externals of the Catholic church and the contemporary music used at Mass (like the St. Louis Jesuits; I myself play guitar today primarily because I was attracted to the guitar music at Mass).

As I progressed through high school and college, I became more interested in the intellectual tradition of the church. It was also in high school that my faith blossomed by working in a soup kitchen and shelter in Philadelphia (the St. Francis Inn, run by Franciscans) and through participation in the Charismatic Renewal. In college and beyond, I delved more into my faith by exploring the monasticism and getting involved in the Catholic Worker movement.

What attracted you to the priesthood?

Initially, I was attracted by what the priest did in church (the Mass and the sacraments). I then began to witness the powerful role that the priest had in people's lives. Since my high school days, I have had a passion to serve the poor, and I soon realized that the priest serves both the materially and spiritually poor. As my appreciation for the priesthood deepened, so did my calling to it.

How old were you when the thought first came to you?

Very young. I remember telling my parents that I wanted to be a priest when I was in first grade.

How did your family feel about this pursuit?

They were very supportive, but I think my mom wanted me to go to a regular college before I entered the seminary. She died in a car accident when I was a sophomore in high school, so she wasn't able to see (from an earthly sense) my faith journey throughout high school, college, and beyond.

What is your most satisfying form of prayer?

Quiet meditation, although I find myself comfortable in many different expressions of prayer. The Catholic church has a deep and rich history in promoting various methods of prayer, and I have enjoyed experiencing much of this prayer tradition: charismatic prayer, monastic prayer, centering prayer, meditation, contemplation, the Examen (Ignatian prayer), and "quiet prayer," where you really do not do anything in the presence of the Lord except spend time with him. I have had excellent spiritual directors and mentors who have helped me on my prayer journey.

Without a doubt, Matthew 25 (the judgment of the nations), where the corporal works of mercy are outlined.

Have you been able to stay connected to the Catholic Worker movement or its New York-based soup kitchen?

I get there as often as I can! I was on a regular schedule of helping out on Wednesdays on the soup line, but my seminary schedule has made it impossible to be to be there that often right now. I look forward to my involvement with the movement as a priest!

What have you learned from that association?

I've learned that we are to love, one person at a time, to accept that person where he or she is and walk with him or her on his or her personal journey toward God.

Of the many images we have of Jesus, is there one that is especially appealing?

Jesus, the good shepherd. He is loving, merciful and just.

Which of these seems reflected in fellow seminarians?

Well, we know that Christ is in the poor, and I think that all of us seminarians are poor, broken men who need to humble ourselves in the presence of others. As much as we are called to minister to others, we need to be ministered to as well. Accepting our brokenness is the first step in knowing that we are radically dependent on Christ for everything!

Do you have any concerns about those seeking the priesthood?

I think all seminarians need to realize that their vocation to the priesthood is communally discerned; therefore, it is important to always remember that a seminarian (and priest) lives out his vocation with the church. He needs the People of God to affirm, challenge and, if necessary, to correct him. All seminarians need a good dose of humility. I place myself at the top of that list!

Is there a priest whom you would like emulate?

There are so many priests that I look up to. Father Perry is definitely at the top of that list. In short, when you see a joyful priest who gives of himself unreservedly to the people entrusted to his care, he is naturally attractive. That is the type of priest I aspire to be.

Some Catholics would like to see optional celibacy open to priests. Do you have an opinion about this? If so, why?

I can understand Catholics desiring that, and the church does have married priests (in the Eastern rites and in former Protestant ministers). I personally think that a nonmarried priest actually has a deeper insight into marriage than one who would be married. It would be difficult for a married priest to separate his own personal experience of marriage when giving counsel to a married couple going through a difficulty. A nonmarried priest, through his regular interactions with couples, gets a nonbiased experience of various married couples at different stages in their marriage. Those experiences, I think, are extremely beneficial for anyone seeking counsel or advice from a priest. Of course, this means that a priest needs to cultivate meaningful relationships with married couples (and laypeople in general)!

What about opening the priesthood to women?

The church has been clear on her teaching regarding opening the priesthood to women. That being said, I think it is important for all Catholics to be fully open to the Holy Spirit in this matter and to not get swept away by personal preferences and agendas (and I have experienced hostile agendas on both sides of this issue). It is the Spirit that ultimately guides the church, and the Spirit fosters unity, not division.

What ministerial setting appeals to you?

An urban, poor setting, but I would be happy to serve anywhere!

Where do you see yourself 10 years after ordination to the priesthood?

Hopefully at peace serving the People of God! I pray that I may be still joyfully striving for humility and patience with myself.

I am a humongous Bob Dylan fan! I think it's important to see where the Holy Spirit is working both inside and outside of the church, and I find that the music of Dylan brings me closer to the Incarnational God -- the Word made flesh, Jesus Christ. For the Incarnation has touched all parts of creation -- especially the creative genius of artists and musicians.

Thank you, John. I wish you continued pastoral blessings and learnings as you move toward priesthood.

Seminarian: Priests need the People of God to affirm, challenge, correct them

Anti-drone protesters, including Dorothy Day granddaughter, jailed on bonds up to $10,000