The anguish of Aleppo 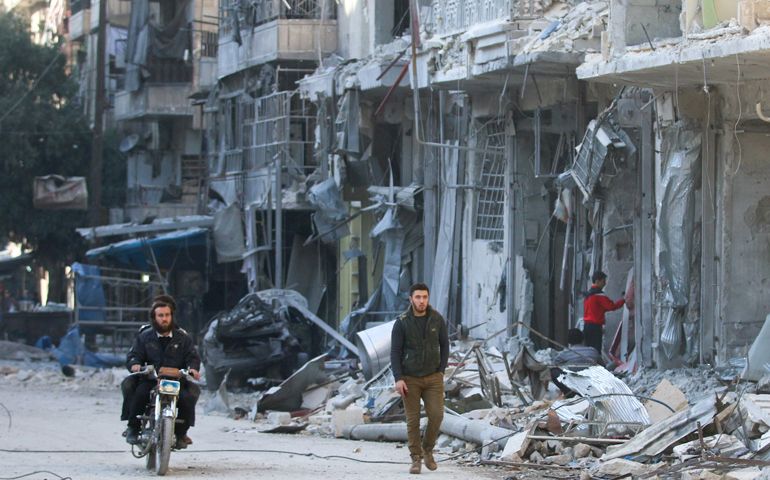 People are seen Nov. 17 in Aleppo, Syria, after an airstrike. (CNS/Abdalrhman Ismail, Reuters)

"The road to hell is paved with good intentions," we all learned growing up, an aphorism with its roots in Virgil and St. Bernard of Clairvaux. Today, hell is found in Aleppo, Syria. Yesterday, the historic Old City of Aleppo fell to government and Russian forces, as the humanitarian crisis in the city deepened.

Hundreds of civilians have been killed since the forces of Syrian dictator Bashar al-Assad, backed by Russian planes and military advisors, began their final assault on the city last month. The dead are only the latest of an estimated half a million people who have been killed in the civil war in Syria. Millions more are refugees fleeing the war. And, unlike Mosul, where current efforts to reclaim the city hold out the prospect of a better future for the people there, living under the Baathist regime of Assad is something far short of peace.

Secretary of State John Kerry continued efforts to negotiate a ceasefire with the Russian foreign minister Sergei Lavrov. Make no mistake about it: Syria is now a client state of Russia, and Vladimir Putin's designs on extending Russian influence in the region have come to fruition in Syria as Secretary Kerry and President Barack Obama refuse to engage the kind of military pressure that might help achieve a diplomatic solution. The Russians send planes. Kerry brings words.

Our Holy Father says that the path to peace, both within societies and among them, is dialogue, dialogue, dialogue. And, in most circumstances, he is correct. None of us knows how many wars have been averted through patient dialogue. But, in this instance, given the evil of the actors and the enormity of the stakes, the time for dialogue, unsupported by force, is not only useless, it is actually making the situation worse for the people of Syria. Pope Francis also likes to say that facts are more important than ideas and, here, the idea that dialogue might yield peace is a delusion, and its perpetuation has facilitated the fact of mass slaughter.

In 1938, Edvard Benes, the president of Czechoslovakia, was negotiating with the German government about the circumstances and sovereignty of the German-speaking peoples of the Sudetenland, which bordered Germany. In walked Neville Chamberlain, an able man filled with good intentions, but who miscalculated with whom he was dealing. The subsequent negotiations at Munich were a disaster for the Czechs. Speaking on Oct. 5, Winston Churchill said to the House of Commons, "I believe the Czechs, left to themselves and told they were going to get no help from the Western Powers, would have been able to make better terms than they have got after all this tremendous perturbation; they could hardly have had worse." The same could be said of the moderate Syrian opposition to Assad. To quote again from that speech: "Silent, mournful, abandoned, broken, Czechoslovakia recedes into the darkness. She has suffered in every respect by her association with the Western democracies and with the League of Nations." Can the same not be said of the moderate Syrians who put their trust and their hopes in the Western democracies in these past few years? Had they known we would not lift a finger to help them, might they not have gotten a better deal for themselves, or at least taken the bad deal they have gotten without all the carnage in the meantime?

Diplomacy is almost always preferable to war, not always and some kinds of diplomacy undercut the achievements of other kinds of diplomacy. In 1948, one of the first achievements of the United Nations was the Convention against Genocide. The diplomacy of Kerry has undermined that achievement. President Obama drew a "red line" at the use of chemical weapons, invoking another achievement, the Convention against Chemical Weapons, but when the line was crossed, and the U.S. declined to lead the world in enforcing the sanctions provided for by that earlier diplomatic achievement, current diplomacy became not just a fig leaf but a lie. Just as the lack of U.S. response to the killings in Rwanda left an indelible stain on the legacy of President Bill Clinton, the lack of a response to the atrocities in Syria will forever stain the record of President Obama.

There was never a need for a full-blown military intervention in Syria. This need not have become a second Iraq. Perhaps the president overlearned the lessons of Iraq. Intervention in Syria, such as enforcing a no fly zone, would have gone a long way to assisting the moderate patriots and would have met both the ad bellum and in bello requirements of just war theory. No one has written more frequently and with greater precision on the Syrian crisis than Robert Christian at Millennial. He saw these evil developments clearly and argued for a more robust response from the U.S. government and was unafraid to call out prominent Catholic thinkers when they were, wittingly or not, spewing Russian propaganda. I wish Christian had been secretary of state these past couple of years.

My colleague, Joshua McElwee, reported on a conference last April at which many critics of just war theory called for its abandonment. I hope those critics have the courage of their convictions and are en route to Aleppo today, to explain how their pacifist delusions will help the suffering and dying in that city, and to make their explanations to the victims. Let them join Kerry and Lavrov at their next meeting in Geneva. But, first, let them reread their Augustine, before more innocent civilians are murdered on the path lined with good intentions.

It is a grim day. Assad is uniquely responsible for the evil that has come to his country, but there are many who have made it possible for him to succeed, each with varying levels of moral culpability. Obama is not responsible in the way that Putin is responsible, but the decision to do nothing, for the United States, is always a decision to do something, a decision to create a vacuum into which forces good and bad will rush. The reckoning will take a long time. Now, it is time to first bury the dead, and with them, the fantasy that diplomacy is always to be preferred to military intervention.

The anguish of Aleppo