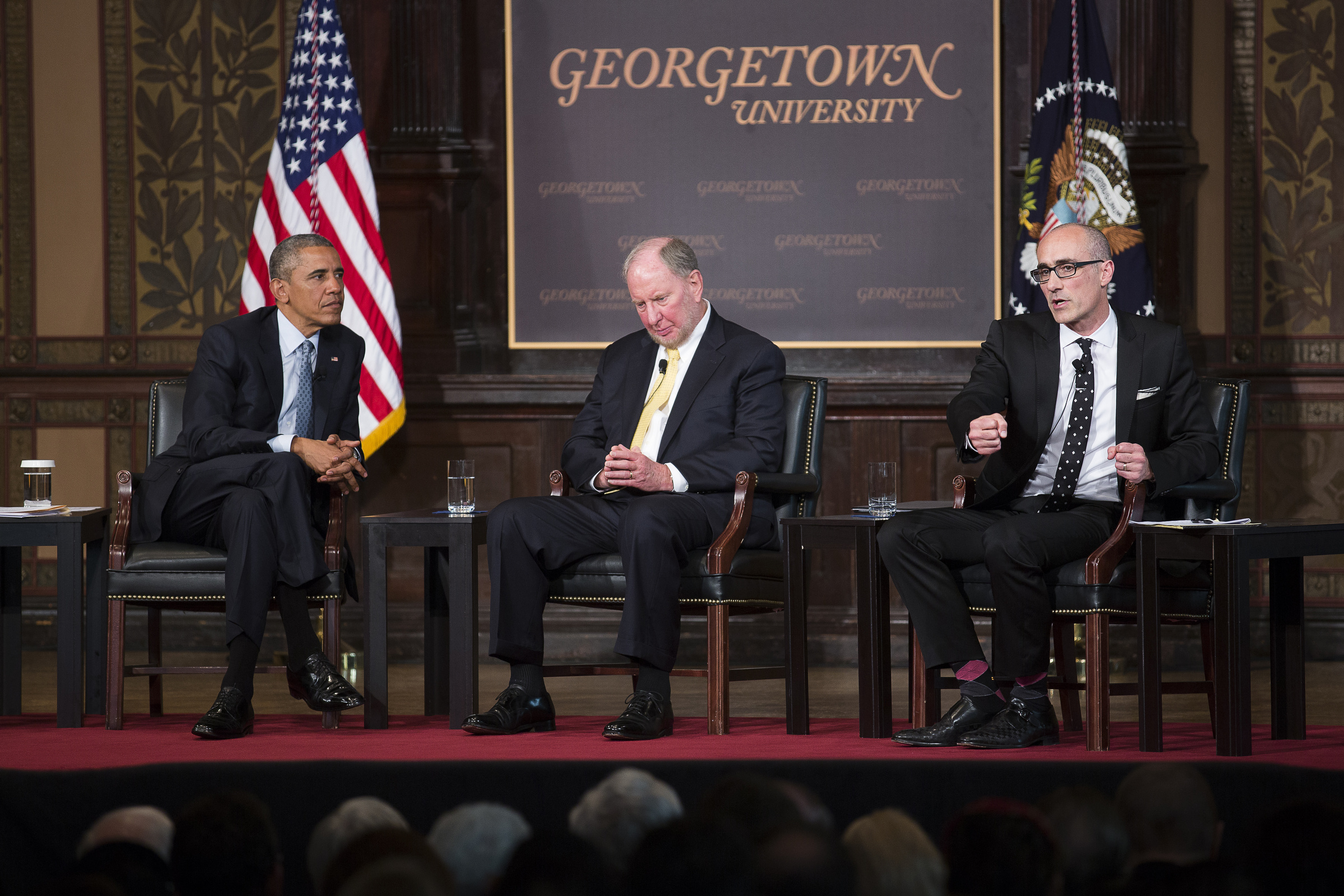 Arthur Brooks, of the American Enterprise Institute, right, talks May 12, 2015, with U.S. President Barack Obama and Robert Putnam of Harvard University during the Catholic-Evangelical Leadership Summit on Overcoming Poverty at Georgetown University in Washington. (CNS/Tyler Orsburn)

Brooks' essay at America has already received a fine rebuttal from Catholic University's David Cloutier, whose recent book, The Vice of Luxury, I reviewed in two parts, here and here. Published in Commonweal, Cloutier's rebuttal focuses on many of the issues I wanted to take on. For example, Brooks says that five interrelated forces are responsible for lifting millions out of poverty: "globalization, free trade, property rights, the rule of law and the culture of entrepreneurship."

Cloutier notes that the free market advocates like some laws, those which protect property rights, but usually oppose others, such as those that regulate the market. "Catholic free market defenders like Brooks would be well-advised to spend more time articulating with precision the 'strong juridical framework which places [the market] at the service of human freedom in its totality.' If conservatives took this responsibility with seriousness, then perhaps we could get past the canard that government regulation is always and everywhere a hindrance to business and prosperity." Well said.

The issue is deeper than regulation. Brooks and other Catholic free-marketeers are correct that Catholic social doctrine posits a right to private property. But, that is not the end of the story. They tend to ignore the church's teaching on the universal destination of goods. Every person is entitled to own what they need for their sustenance, but whatever they own beyond that has a social mortgage attached. I can conceive of other civil society actors being the beneficiary of that social mortgage, but I do not see why government should not as well. It is typical of Brooks that he highlights those few principles of Catholic social doctrine that do not challenge his faith in the market, but neglects other important principles that would challenge his economic presuppositions.

The argument that capitalism has lifted millions out of poverty is true but not exhaustive. I will stipulate that the end of Maoism and the Cultural Revolution was a good thing, and China accounts for many if not most of those millions who have been lifted out of poverty. Brooks is ambivalent about China. "If capitalism per se does not cause income inequality, what does? One part of the answer becomes clear after spending just a few days in China or Argentina," he writes. "It is impossible to miss that prosperity in these places depends largely on political power and privilege, much more so than in the United States. While the United States is not perfect on this score by any means, our relative success at decoupling non-merit-based clout from economic success goes a long way toward explaining why so many people are so eager to relocate here."

In the context of China, I do not quibble with the phrase "non-merit-based clout" but surely the clout of government may have as much merit about it as capitalist success. We need to know more about the nature of the government and the nature of the capitalists, but such knowledge only results from questions the free market fans tend to avoid, lumping all government interference in the pristine workings of the market together and labeling them bad. But, if this is the same China that has lifted millions out of poverty since adopting market-based reforms, I wonder if an unfettered capitalism would have been as successful as the Chinese variety at actually lifting so many millions out of poverty? There is no way to know and the only yardstick the apologists for capitalism allow themselves is efficiency, which avoids the important issues. In his final paragraph, Cloutier makes what is for me a very important point when he writes of "those whom Pope Benedict critiques in Caritas in Veritate for believing that charity and generosity are simply supposed to go on 'after' the 'neutral' market transactions take place. Benedict, by contrast, wants to infuse markets themselves with 'quotas of gratuitousness,' a phrase which if taken seriously would require a radically altered Econ 101 that assumed different things about agents and about the sort of economy that would be optimal."

This is key. For Brooks and capitalism's other fellow travelers in the Catholic intellectual milieu, capitalism is treated as a given, its laws akin to the natural law, and, in some extreme cases, as a source of divine grace. "For many years, one of my favorite texts in Scripture has been Isaiah 53:2-3: 'He hath no form or comeliness; and when we shall see him, there is no beauty that we should desire him. He is despised and rejected of men; a man of sorrows, and acquainted with grief; he was despised and we esteemed him not.' I would like to apply these words to the modern business corporation, a much despised incarnation of God's presence in this world," wrote Michael Novak in his essay "A Theology of the Corporation." No matter how many times I read those words, I am still shocked by them.

The capitalists like to cloak their system with all manner of virtue, and the more morally serious among them, like Brooks, recognize the importance of morality to making capitalism humane, but the morality is always extrinsic, an add-on. I read their defense of the free market and I am always reminded of James Madison defending the Constitution, noting that if men were angels there would be no need for government. If the morality is extrinsic and must be brought to the putatively neutral market, and it must be good for the system to work, then we must find a world of angels, no? And, if men were angels, then any economic system would yield just results, yes? The problem is that men are not angels, and capitalism as a system encourages behaviors that a Christian is called to shun.

Catholic social doctrine is a rich and challenging set of teachings. Brooks cherry picks those items he likes and ignores a great deal. Reading his essay, and seeing how he engages the Catholic tradition, put me in mind of a type of American tourist, one who goes to Rome, eats at a variety of restaurants, but all he ever orders is spaghetti and meatballs or maybe lasagna. Brooks is not so much wrong as he is incomplete, he comes to the tradition seeking only what will bolster his other faith. At some point, certainly if you are going to publish, you need to recognize the ways your religions collide and choose between them.