Cardinal Cupich points to a new consistent ethic of solidarity 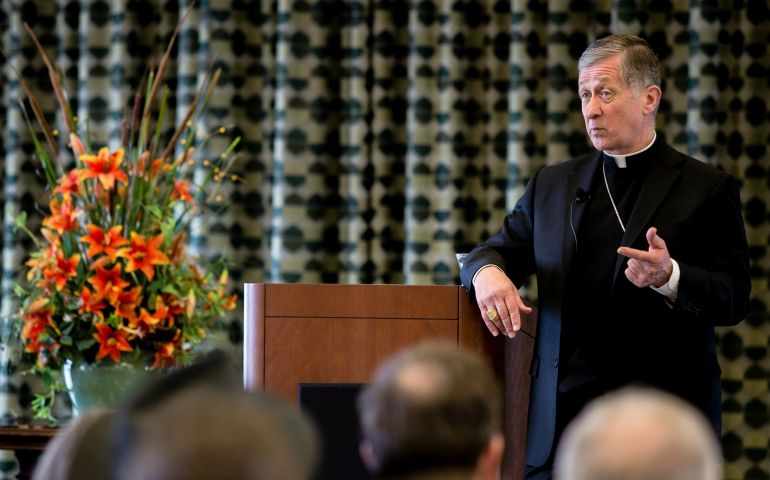 Yesterday, I looked at Pope Francis' talk last weekend to workers in Genoa and how that talk quite unambiguously challenged those conservative Catholics who continually argue that the free market can be baptized or, at least, that it is morally neutral. Today, I would like to look at another recent text, the inaugural Cardinal Bernardin Common Cause Lecture delivered at Loyola University Chicago last month by Chicago Cardinal Blase Cupich and recently published at Commonweal.

Let's focus on three passages in the cardinal's talk. First, Cupich persuasively argues that Cardinal Joseph Bernardin's "consistent ethic of life" speech in 1983 was not only spot-on, but that the opposition to Bernardin's approach was rooted in politics, not theology. Cupich states:

He knew as well that the integrity of Catholic social teaching made it uniquely suited as a framework for holding these issues together under a common principle. How was it, he asked, that the Catholic bishops, virtually alone among leadership groups in American society, found themselves witnessing ardently against both abortion and the nuclear-war policies of the United States? It was the integrity of its teaching — that is, a consistent ethic of life — that set the church apart. As a result, Catholic social teaching would not and could not be fitted into the partisan political framework that governs American public life, then or now.

Bernardin's speech came at a time when some leading figures in both church and politics were intent on aligning the Catholic Church with the Republican Party, and also with undermining the bishops' conference as it had functioned in the past. Some years ago, a bishop told me that when he was an auxiliary bishop, he had used the phrase "seamless garment," which Bernardin had invoked to explain the consistent ethic of life. The next day, he got a call from the archbishop saying, "We don't use that language in this archdiocese," as if it had been a cuss word.

The opposition to Bernardin was not to what he said. If anything, the clarity and insight of what he said made it even more objectionable to those who wanted to make the Bernardin style of church leadership obsolete.

Regular readers of this blog may recall George Weigel's column at First Things some years back titled "The End of the Bernardin Era." Cupich's talk points out how premature Weigel's verdict was.

Without oversimplifying, the challenge for us today is not only that the issues are in silos, separated one from another; it is also that people, in their social networks and through the media they consult, are in silos, bereft of challenge or debate, isolated by differences of opinion or politics, race or social class, in a way that obscures our shared humanity and the ties that historically have united us as a nation of immigrants. It is not too strong to say that this sense of disconnectedness is being legitimized not only by voices in the streets, but also by those in the halls of governance here and around the world, giving rise to xenophobia, nationalism, populism, and racial intolerance. All of this makes entire populations more vulnerable to disturbing influences that only further divide while pretending to offer as solutions distorted views of the role of the economy and politics, how we relate to other nations, and how to deal with global conflicts.

I am convinced that just as Cardinal Bernardin proposed that an ethic of life be consistently applied to unite all life issues, we need in our day to mine the church’s social teaching on solidarity, as a means of uniting humanity through a reawakening of our interdependence as a human family, which Pope John Paul II called for in his groundbreaking encyclical Sollicitudo rei socialis, and which Pope Francis is advocating in his writings. Solidarity needs to be applied consistently to all our human interactions, John Paul II wrote three decades ago, calling us to "see the 'other' — whether a person, people or nation ... as our 'neighbor,' a 'helper' ... a sharer, on a par with ourselves, in the banquet of life to which all are equally invited by God."

"World leaders," he continued, likewise need "to recognize that interdependence in itself demands the abandonment of the politics of blocs, the sacrifice of all forms of economic, military, or political imperialism, and the transformation of mutual distrust into collaboration. This is precisely the act proper to solidarity among individuals and nations."

This fundamental stance toward the other is not a partisan position. If the opposition to Bernardin led to priests telling their parishioners that it is a sin to vote for a Democrat, that the only way to be a "real Catholic" is to be a Catholic their way, Cupich's approach does not traffic in any such partisanship.

There is an imbalance here. So-called "liberal" bishops like Cupich do not insist that everyone vote Democratic or think like a liberal. They want Catholics of all types to seek common ground. Cupich calls Catholics to focus on what we share in common one with another, and with all people, not to start by highlighting our differences or by noting the speck in our brother's eye.

Nor is it a matter of finding some arbitrary "center" between two ideological polls. The "center" we are called to aim at is, like a centering prayer, something deeper in our faith, the theological and liturgical equivalent of bedrock.

The third passage to which I would like to call attention is this one in which Cupich gives an example of how a consistent ethic of solidarity would challenge some entrenched interests and ways of thinking. He states:

The principle of solidarity would critique a narrow approach to the economy that uses a one-dimensional measure of the economic growth of a nation, singularly defined by profits, that promotes policies that maximize the freedom of markets and individual choice, and that believes that market forces left to themselves are the best — indeed, the only — arbiters of economic progress. This narrow approach has produced "an economy that kills," as Pope Francis has said.

In its place, a consistent ethic of solidarity would argue that inclusion and economic security for all are the measures of economic health and the criteria for economic decision-making. Solidarity produces the kind of social-market economy that John Paul II advocated, which involves, as Pope Francis noted, passing from a liquid economy "directed at revenue profiting from speculation and lending at interest, to a social economy that invests in persons creating jobs and providing training."

I think the other examples he uses are equally important, especially the section on nationalism and how it can be perverted. But this passage just quoted links Cupich's talk to the Holy Father's talk about which I wrote yesterday. In American society and culture, the economic powers that be and the economic paradigms that shape our ways of thinking are so dominant, it is obvious to all that if the church wishes to be a "sign of contradiction," it must start here or its witness is not credible.

I encourage everyone to read the full text of Cupich's talk and, what is more, to take up his explicit challenge, as members of the church, to define the issues in our time and in our society and culture. Both Bernardin's 1983 talk and Cupich's last month achieve precisely that, a way of framing the public discussion that is rooted deeply in the wellsprings of our Catholic faith.

So often, public discourse is coarsened by partisan flaks, or reduced to talking points, or horribly superficial. The church doesn't fit into the usual boxes our culture erects and, just so, can challenge us all to think more deeply as well as more clearly. Cupich is doing precisely what the pope asked us all to do: Stir things up!