Commentary on 'irregular unions' should be required reading for all pastors 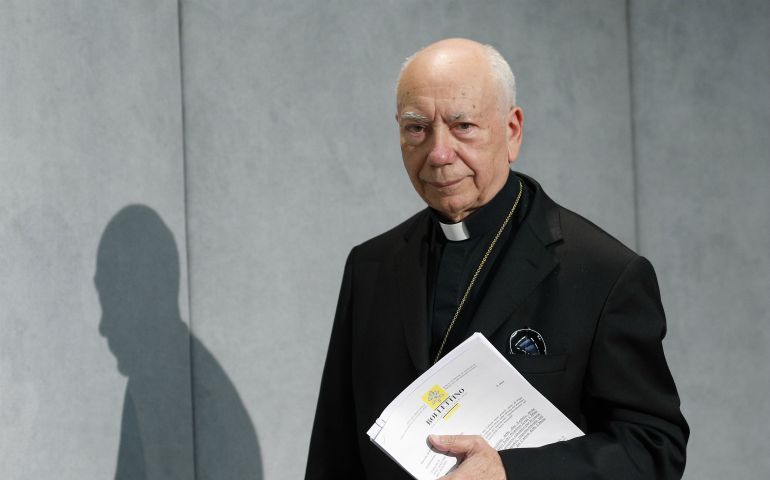 I do not know what I was expecting when I heard that Cardinal Francesco Coccopalmerio had written a commentary on Chapter 8 of Amoris Laetitia, the contentious chapter that deals with ministering to those in "irregular unions." In 2007, he was appointed president of the Pontifical Council for Legislative Texts, a job that is mostly canonical in nature. And, at a time when some disgruntled cardinals were hurling challenges dressed up as dubia at the pope, I suppose I feared a text that would dig deep into more canonical weeds when it seemed to me that one of the whole purposes of Amoris Laetitia was to get the church out of the canonical weeds.

To my surprise, and delight, Cardinal Coccopalmiero's text seems primarily written for those who find themselves in an irregular union and those who are called to minister to them. The cardinal looks at some of the different themes in the chapter, which, as he points out, are "not always in order" in the document, and brings them together, to see what are the practical implications of what the Holy Father is teaching. This little book is pedestrian in the way the pope is calling the church to be pedestrian, to walk with the people of God, not too far ahead of them, never above them, but beside them. And, just so, it is the perfect answer to anyone who claims to be "confused" by Amoris Laetitia.

So, for example, in his second chapter, Coccopalmerio points out that the exhortation contains "two points of view": a "repeated affirmation of the firm resolve to remain faithful to the Church's teaching on marriage and the family; and the view of the Church, of pastors, and the faithful toward irregular partnerships, particularly civil marriages and de facto unions." To illustrate the first point, he cites four different paragraphs of varying length from the document that pertain to this reaffirmation of the church's teaching and then brings together the key phrases into a succinct paragraph of his own:

We can reread and then highlight some expressions that mean to affirm the full intention to be faithful to the traditional doctrine of the Church: "This discernment can never prescind from the Gospel demands of truth and charity, as proposed by the Church … there can be no risk that a specific discernment may lead people to think that the Church maintains a double standard" (#300); "lest anyone think that the demands of the Gospel are in any way being compromised" (#301); "in no way must the Church desist from proposing the full ideal of marriage, God's plan. … [A]ny kind of relativism, or an undue reticence in proposing that ideal, would be a lack of fidelity to the Gospel … dimming the light of the fuller ideal, or proposing less than what Jesus offers …"(#307). These expressions speak for themselves.

So, when someone frets that Pope Francis is "changing irreformable doctrine," just have them turn to pages 7-9 of Coccopalmerio's text.

Coccopalmiero retrieves three classic reasons for exempting a person from the state of mortal sin: ignorance of the rule, difficulty in understanding the inherent values in the moral rule, and, what he terms the most problematic reason, "a concrete situation which does not allow him or her to act differently and decide otherwise without further sin." For clarification, he turns to #298, in which Pope Francis called attention to second unions that were "consolidated over time, with new children, proven fidelity, generous self-giving, Christian commitment, a consciousness of its irregularity and of the great difficulty in going back without feeling in conscience that one would fall into new sins." These situations are where discernment must come into play because they are complicated, although they are not confusing. Reading through the list of mitigating factors, we all can think of a couple that fits the bill. And isn't that the point? We have to remember that there are people at the heart of this, not mere canon laws or theological postulates.

We can see that Coccopalmerio, like the two synods of bishops and the pope himself, has gone too far for some conservative canonists who contend that there can be no discussion or discernment in these situations. But we can also see how the cardinal, in his insistence that the persons in the irregular situation possess a "consciousness of its irregularity," is in no way embracing a Protestant understanding of a second union. Indeed, in a subsequent section of the book, he makes the case that admission to the sacraments requires not only a consciousness of the irregularity, but a desire to change it even while admitting the situation cannot be changed for other, good and compelling reasons. This will disappoint those theological liberals who prefer a therapeutic model. It shows to me that the cardinal, who has long been involved in ecumenical and interreligious affairs, has been happily influenced by the Orthodox way of treating second unions, although he, and the pope, did not go as far as the Orthodox churches do.

Perhaps the best chapter deals with the relationship between doctrine and a rule in general and the person in particular. The cardinal speaks about the need to "respect the ontology of the person" which entails those parts of our personhood we share as human beings in common with each other, and those parts which are unique to each person. He highlights three expressions from three different paragraphs of Amoris Laetitia and offers his conclusion:

… what for now is the most generous response which can be given to God … is what God himself is asking amid the concrete complexity of one's limits. (#303)

These expressions speak for themselves. They are, however, marked by great realism and great respect for the specific ontology of every person.

This book makes me want to join a book club with Cardinal Raymond Burke and the staff at EWTN and read through this text together. It could not be more clear, although the translation is a bit clunky at times. In dealing with the complexities of life, it could not be more simple, just as Pope Francis regularly reaches into the simplicity of the Gospel in his words and, even more, his gestures. It is all of 56 pages long, so it doesn't take long to read. Every bishop should make this a gift to his clergy, and every priest should keep copies on hand for those who find themselves in irregular situations. I also commend this book to students of church history who are interested to see how the church recalibrates itself in real time, reaching back into its own tradition to find what was there all along, if overlooked for a bit, all for the purpose for which canon law and theology exist: the salvation of souls.