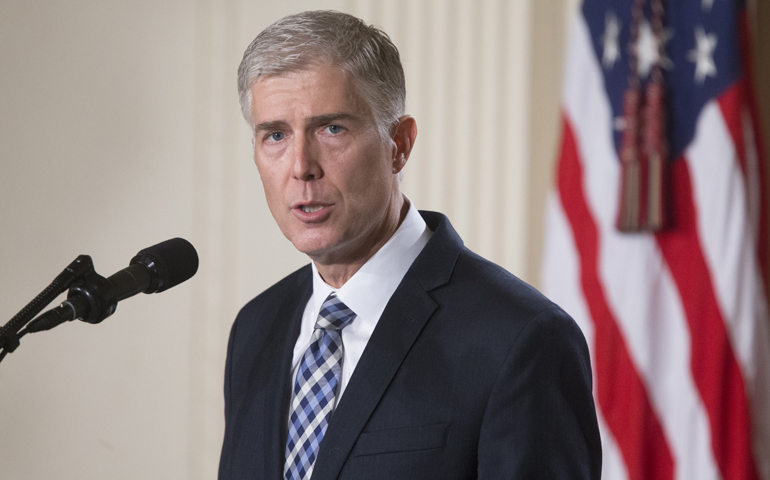 President Trump's decision to nominate Judge Neil Gorsuch to the U.S. Supreme Court is, as I indicated Tuesday, the kind of selection that any mainstream Republican president would make. Mitt Romney would have had Gorsuch on his shortlist if he had won the presidency, as would Jeb Bush or John Kasich.

Which is why it was such a surprise. I had expected Trump to approach this decision as he approached everything else his first two weeks in office, a disruptive choice designed to sow some chaos into the mix. Perhaps because of his sister, Judge Maryanne Trump Barry* of the 3rd Circuit Court of Appeals, he understood the gravity of the decision and decided to make a grown up decision. Indeed, watching the president make his announcement Tuesday night, I couldn't suppress the thought that this is what Trump looks like when he pretends to be presidential.

I am grateful that Judge Gorsuch has never issued an opinion in a decision related to abortion, the politics of which tend to dominate court nominations. I am sure we know where he stands: He wrote a book about the inviolability of human life at its end, arguing against assisted suicide laws, so I am more than a little confident he acknowledges the inviolability of life at its beginning too. Still, when senators ask his opinion about Roe v. Wade and Casey v. Planned Parenthood, and have no judicial opinion to which to point, he will simply demur, uttering the traditional avowal that it is best he not comment on issues that might come before the court. The senators will try half a dozen different ways to frame the question, and he will devise a half a dozen different ways to avoid answering it.

This will not prevent the abortion issue from playing a disproportionate role in the public discussion between now and his confirmation vote. Pro-choice groups and pro-life groups both look at a Supreme Court nomination and they see fundraising gold. It is a shame that partisans on both sides will let themselves get dragged into the bizarre, and bizarrely symbiotic, relationship between the organized groups on both sides, but they will.

We can anticipate that Judge Gorsuch's nomination will prompt the first vigorous public discussion of assisted suicide at the federal level. Gorsuch did write a book on the subject so it is unavoidable. I worry that the country is not ready for a real discussion about assisted suicide. At a time when even many Catholics extol the virtues of the market, and we raise children on consumerism from a very early age, the invocation of choice usually wins a public debate. Add in some of the painful stories of people like Brittany Maynard, the young woman with inoperable brain cancer who wanted to terminate her life by means of assisted suicide, and those of us who defend the dignity of each and every life have our work cut out for us.

I do not want to turn this commentary into an essay on assisted suicide. But, I shall say this: If we invoke church teaching or natural law, we will lose. Instead, church leaders should highlight the work that is done day in and day out in our many hospitals and palliative care centers. Dedicated nurses, committed volunteers, caring for a patient in the last days of their life: That is what a death with dignity looks like. Nurses who work in hospice know what a death with dignity looks like. They must be the face of the opposition to assisted suicide.

Democrats will be tempted to oppose Gorsuch for two reasons. First, they are rightly still sore about the wrong that was done to Judge Merrick Garland, whom President Barack Obama nominated last year to fill the seat left vacant by Justice Antonin Scalia's death. They have every right to be sore, but that wrong was not perpetrated by Gorsuch. Second, they probably disagree with Gorsuch on a host of issues from regulatory enforcement to labor rights.

It is been the tradition of the Senate that disagreement with a nominee's views is insufficient grounds to oppose his or her nomination. That never made sense to me. I find "originalists" especially smug in their claim that they can easily discern the intent of the founders, even though the founders had many intentions when they met in Philadelphia to craft the Constitution, and I know of no text that is entirely self-explanatory. But, in this case, Democrats will want to parade for their base, huffing and puffing for their own political purposes, as recommended to them just this morning by Eugene Robinson in The Washington Post.

Still, Democrats should resist the temptation. It is one thing for Republicans to be the obstructionist party. Part of their central political ideology is the belief that government is a problem, is inept, and that the market should rarely if ever be tampered with by governmental oversight. It only builds their brand when they make government appear dysfunctional. But, Democrats believe in using government to achieve important societal goals. Making the government appear not only unworkable but incapable of putting the national interest above the partisan interest damages that core Democratic Party idea.

Judge Gorsuch would not have been my choice. I am sure he would not have been selected by any Democratic president. But, for most of our history, a disagreement over judicial philosophy has not been sufficient to justify a negative vote against a qualified nominee. No one is questioning Judge Gorsuch's credentials. He is not outside the mainstream of judicial thought. He should be confirmed.

And, Democrats should save their fire for when Trump acts like a petulant child or a petty tyrant. In this case, the president acted like a president.

*Updated to include the correct name.