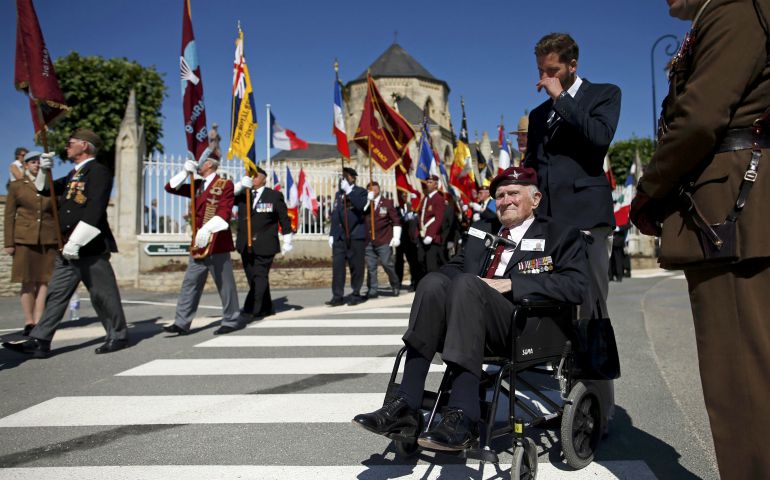 Today is the anniversary of D-Day. In 1944, American, British and Canadian forces landed on the coast of Normandy and began the liberation of Western Europe from the Nazi yoke, which would be completed less than one year later. Let us consider what lessons that day has for us.

The Normandy landing was the largest and most complex military operation in history. No one had forced the English Channel since William the Conqueror had done so in 1066. Indeed, there was a characteristically Churchillian moment at one of the planning meetings for the operation, when the military advisers were debating at what time of day to make the crossing. After much back and forth, Churchill asked, "When did William cross?" This baffled the Americans who were unsure to whom the prime minister was referring.

More recently, and much in the memory of the Englishmen attending these preparatory meetings, in 1940, having vanquished France and with Britain having lost almost all its military hardware on the beaches of Dunkerque, the Nazis contemplated forcing the Channel in September of that year, before the winter gales made it impossible. They decided against attempting it.

The problem the Nazis declined to face, and the one that now confronted the Allies, was how to achieve tactical surprise and how to deal with the exigencies of the complex operation. Assembling a million men, almost 200,000 in the first wave, with all their equipment, and the ships to bring them across, is hard to conceal. Additional problems loomed. There was a differential of some 40 minutes between the tides along the five landing beaches in Normandy. The planners had to calculate when the moon would permit them sufficient visibility, especially for the airborne troops, and only three days per lunar month seemed adequate. The weather had to be monitored to avoid the notoriously turbulent waters of the Channel and the low cloud cover that would rob the Allies of their air superiority. Originally planned for May, D-Day had to be postponed by one month in order to have more landing craft on hand.

As well, a greater difficulty than figuring out how to hurl a million or so men ashore, is the challenge of sustaining them, keeping them supplied, and sending in reinforcements. To achieve this, the Allies needed to keep control of the sea and the air so that ships could go to and fro. The lack of a deep water port in the landing area of Normandy necessitated the construction of artificial harbors, large cement caissons that were floated across the Channel and then sunk, forming a breakwater. Code-named "Mulberries," these two harbors were critical to the supply of the troops in the first weeks and months of the invasion. Within a month, a gale had ruined one of the harbors and severely damaged another, but they served their function in the critical early days.

At Anzio, in January of 1944, the Americans and British forces had learned some painful lessons about how not to mount an amphibious invasion. Once landed, the troops did not push their way inland, and so they were confined to a narrow bridgehead from which it was almost impossible to mount a further attempt to break out. Additionally, the generals in charge of the operation had gotten ahead of themselves in planning for the transportation needs of the troops: By the 14th day after the landing, there were some 18,000 vehicles at Anzio for 70,000 troops. In a telegram, Churchill commented, "We must have a great superiority of chauffeurs."

The Normandy invasion, or "Operation Overlord" as it was code-named, demonstrated more than any other battle in World War II that the greatness of a modern general no longer consisted so much in his bravery or brilliance on the field but in his mastery of the logistics of an operation. Gen. Dwight Eisenhower, Supreme Allied Commander of the invasion, was nowhere near the Normandy beaches on D-Day. His planning was what made the invasion possible, that, and his lucky decision to postpone the crossing from June 5 to June 6 when the meteorologists predicted a break in the weather.

I detail these few facts about D-Day to point out a lesson that should be kept in mind when we render a judgment on history, or when we contemplate a series of political choices in our time: The Hinge of Fate requires all the planning a society can muster, but it still might not be enough. What if the weather had not cleared on D-Day and, without air support, the troops had been hurled back? The industrial strength of the U.S., U.K., and the Soviet Union still far outstripped that of Nazi Germany, but 1944 was an election year. Could the aging and ailing Franklin Roosevelt have withstood such a massive failure in the field? Could Churchill? Would not a new set of political leaders emerge, perhaps open to the idea of negotiating a peace settlement with Germany? Certainly, armed with the knowledge that the Western Allies could not mount a second attempt anytime soon, the Germans could have deployed more troops to the Eastern front and perhaps stalled the Soviet steamroller. Thankfully, we will never know how these evil consequences might have played out.

On the other hand, what if Gen. Bernard Montgomery and his British forces actually had reached and taken the city of Caen on the first day of the invasion? Instead of being bogged down for weeks, fighting in the hedgerows of the Norman countryside, perhaps the Allies could have broken out sooner. If that had happened, who knows how much more quickly they could have advanced across France and Belgium and into Germany? Perhaps the point at which the Western Allies met the Red Army might be 50 miles or 100 miles to the east of where they did in fact meet. Perhaps Berlin and Prague might have fallen to Eisenhower not to Gen. Georgy Zhukov, and millions more people in the postwar era would have been on the Western side of the Iron Curtain.

These are all the contingencies of history, and if there is a lesson to be drawn from them, it is that success may be granted or stolen on account of forces beyond one's control, but our planning and forethought nonetheless can make the consequences of success or failure more manageable. We can anticipate a Plan B or C. We can weigh alternative strategies that reflect conflicting values, both moral and military, such as how many civilian casualties to risk in an effort to shut down the communications of the enemy. We may still find ourselves, like the soldiers at Anzio, stuck because of a mistake, armed to the teeth with things we do not need, because fortune did not smile on us or because a key official made a bad decision.

Yesterday, I wrote about President Donald Trump's decision to take the United States out of the Paris accord on climate change. None of us knows for sure when the Earth will confront a tipping point, when even drastic remedial actions on our part might be too late to forestall the kind of massive changes in climate that wreak havoc and destruction upon millions. The wise course is to do all we can, and as soon as we can, to bend the arc of climate change in a less drastic direction, to act when small actions might yield great consequences so that we do not find ourselves in a position when even great actions will be insufficient. The demands of the climate changes we face may yet require of us all an effort similar to that our grandparents undertook in World War II.

The invasion of Normandy was the outcome of years of both military planning and political decision-making. Conferences with the heads of government and their staffs in Washington, Quebec, Casablanca and Teheran had focused on the invasion, among other clamant issues. Hours upon hours at military HQ had been spent examining every aspect of the plan in detail. Different scenarios had been sketched and thought through. The industrial strength of many nations had been directed towards this operation. (You can still ride one of the tank landing ships that took part in D-Day; it now crosses Long Island Sound from New London to Orient Point as a passenger and car ferry.) In sum, the decision to invade was, ultimately, an informed decision.

Can anyone really suggest that Trump's decision to withdraw from the Paris accord was similarly well informed? Even if you think those of us concerned about climate change have cast ourselves in the role of the boy crying wolf, you cannot think it a good thing to have a president make such large decisions based on little information, less consultation, listening to his gut and ignoring teams of experts. Regrettably, we find ourselves cast in the role of Cassandra instead. It is appalling to think that the fate of the planet has been dealt such a harmful, unnecessary blow, and for no good reason! It is yet more appalling to think that all large decisions of our government these four years will be similarly decided. The greatest generation is dying out. The era of Trumpian narcissism is upon us. It is too grim.