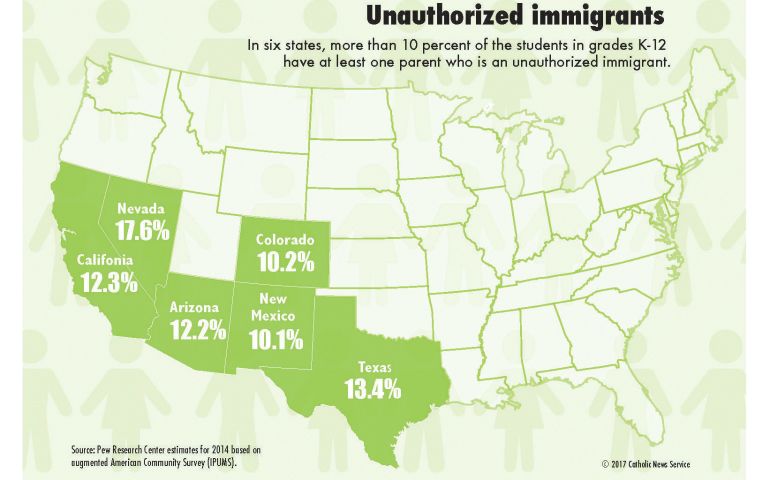 Protests greeted President Donald Trump's executive order instituting a ban on refugees and immigrants from seven majority-Muslim countries. At seemingly a moment's notice, crowds showed up at airports, with immigration lawyers accompanying them. Motions were filed in court to stay the ban, which succeeded so far. Cardinals and bishops published strong statements condemning the order.

Those protests were a testimony to the moral fiber of the country. The protesters knew that the issue was not only the harm being perpetrated on innocent and vulnerable people who posed no threat to the country, having endured months if not years of vetting. They knew that the executive order was an offense to our national identity, not only as a nation of immigrants, but as a nation capable of humanitarianism.

Less attention was paid to a different executive order signed by the president, one that pledged an increase in the number of agents assigned the task of deporting undocumented immigrants and altered the calculus of who should be the target of raids by those agents.

In the course of last week, we witnessed the first bitter fruits of this other order, as deportation raids were conducted at homes and work places in Atlanta, Chicago, New York, the Los Angeles area, North Carolina, South Carolina and Texas. Officials said the raids targeted known criminals, but they admitted that others were caught in the net, too.

According to The Washington Post report, fear is pronounced throughout the immigrant communities in our country. "We cannot understate the level of panic and terror that is running through many immigrant communities," said Walter Barrientos of Make the Road New York in New York City, who spoke on a conference call with immigration advocates, according to the Post.

Pastors from Chula Vista, Calif., to Boston, Mass., report a similar sense of fear. Last week, Cardinal Sean O'Malley said Mass at Most Holy Redeemer parish in East Boston, which was packed with more than a thousand immigrants from throughout Latin America. He invited Mayor Marty Walsh and Police Commissioner William Evans to address the congregation. "Many immigrant families are very fearful because of recent developments in our country and things they are hearing in the press, and so I was anxious for people to hear from Commissioner Evans that the Boston police are here to serve the people in the community and that there is no need to be afraid of them," the cardinal explained on his blog. "Commissioner Evans reminded the people that they are not agents of the immigration service, but are there to serve and protect the entire community. I think many people were greatly appreciative of his sentiments." The immigrant community trusts the church already, and we must be worthy of that trust. God bless O'Malley and other pastors for reaching out so quickly to that community and assuring them of the church's steadfast support.

It is more than doubtful that our new president will care about the fear he has caused or that he will listen to the moral concerns voiced by Cardinal O'Malley and other pastors. He knows, as they know, that plenty of Catholics voted for him. For many, many years, Catholics have been told, or been led to believe by a few noisy bishops, that the only issue that mattered at election time was abortion. Sadly, the children of immigrants are as often as not likely to want the door closed behind them. The bishops and clergy of the Catholic church must, repeat, must, engage in sustained preaching and catechesis on the church's teaching about migrants. The racial animus that often lurks beneath the stated concern for national security must be exposed for the sin that it is. If our Catholic people begin to embrace the church's teaching on the dignity of immigrants, maybe some in Washington will notice and counteract hateful nativism Steve Bannon keeps whispering into the president's ear.

As was the case with the executive order banning refugees, there is a deeper issue with this executive order, too. Both were not crafted with a view toward addressing an actual problem. Refugees from dangerous countries are already thoroughly vetted, and none of the seven countries whose nationals were banned ever perpetrated a terrorist act on U.S. soil. Net immigration has been in decline for years, and the vast, vast majority of immigrants are not criminals as Mr. Trump labeled them when he first announced he was seeking the presidency. He has proposed fake solutions for non-problems.

That is the most worrisome aspect of both these executive orders: This is propaganda, telling a lie in order to appeal to people's basest emotions for the political benefit of the man telling the lie. And, because the deportation order has not been met with the outcry that the refugee order was, I fear that Trump's policy will more readily be normalized. He can point, correctly, to the deportation policy of his predecessor, which also reeked of inhumane treatment of immigrants. Trump is making President Obama's bad policy worse, but there is a continuum, and continuums facilitate normalization.

The Catholic church is not defenseless in this struggle to defend innocent immigrants from deportation raids. The lawyers at the Catholic Legal Immigration Network (CLINIC) can make sure that those arrested know their rights and receive legal counsel. Workers can stand together to make an immigration raid on their workplace more difficult to execute. But to fully stop these evil raids from continuing, we need organized political opposition. Mr. Trump must know there is a price to be paid for attacking these already vulnerable Americans, and they are Americans in everything but legal form. The leaders of our church can and should make that price very evident to the administration and to congressional Republicans.

A third executive order pledged the administration to building a wall along the nation's southern border. The difficulties with that plan will argue for themselves: Let Trump argue with the ranchers in Texas whose lands will be affected. Environmental regulations will take years to overcome. And it won't work. For all its symbolic importance, the wall is of less concern than the deportations.

Every day brings new turmoil and more craziness from this new administration, but, unlike the president, we cannot let ourselves be distracted by small things: The prospect, no, the reality of deportation police roaming through neighborhoods and workplaces places, the very soul of America at risk. We who believe that America's greatness is discerned principally in its commitment to the humane treatment of the vulnerable, however much we have dishonored that commitment in the past, must stand up and speak out against the deportation raids as forcefully as we did against the refugee ban. The welfare of the people concerned and the decency of the culture we share demand no less.