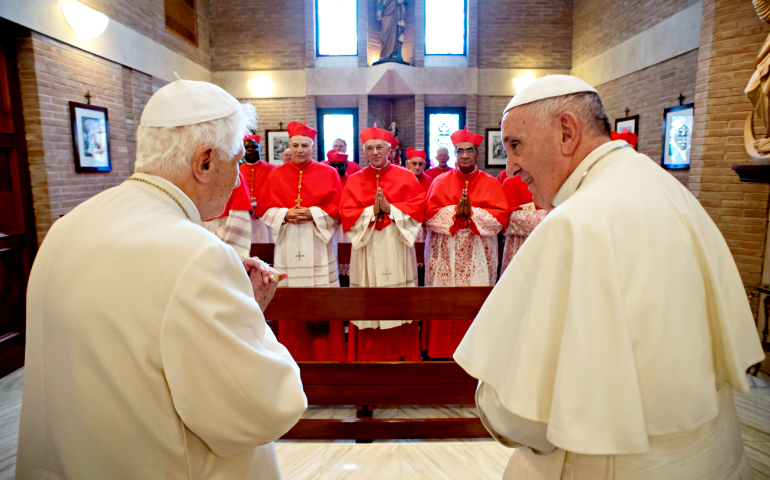 Editor's note: This is Part 3 of a three-part series discussing the theologies of the papacies of Pope Francis and Pope Paul VI. Click to read Part 1, "Criticism of Pope Francis rooted in misunderstanding of Vatican II," and Part 2, "Pope Paul VI's greatness lies in his church leadership after Vatican II."

The Italians have a saying: "After a fat pope, a thin pope." Different men bring different personal qualities to the task, and their sense of the issues they face and their understanding of the Petrine ministry itself will have been shaped by their life experiences. It should be no surprise that there are differences from one pope to another. Just as it is rare for the American people to elect a presidential candidate from the same party more than twice in a row, cardinals tend to set the pendulum swinging every 30 years or so, between popes who are determined to press forward and popes who think it is time to consolidate the gains and clarify any stray developments.

It is important to note that the tensions that exist around Pope Francis' pontificate are often the result of fidelity to the entirety of the conciliar teaching. Take, for instance, the topic that became the most controversial during the twin synods on the family (October 2014 and October 2015): the relationship of conscience and moral law in determining whether the divorced and remarried can discern a path to the sacraments.

According to church historian Massimo Faggioli of Villanova University, "The tensions between the sovereignty of the conscience of the faithful (from the Second Vatican Council document Gaudium et Spes, #16) and obsequium religiosum (religious submission to the authentic magisterium of the Church in the Vatican II document Lumen Gentium, #25) are already part of the teaching of Vatican II: in this sense Vatican II makes clear and does not resolve the paradoxes within the Catholic experience."

"There are tensions that cannot be solved by the magisterium or by canon law," Faggioli continues. "Christianity in general and Catholicism in particular teach us to live with these tensions without (if possible) to make of these paradoxes a pattern of hypocrisy."

Faggioli believes Francis is restoring the balance between conscience and religious submission. He also thinks one of the biggest differences among the popes since Vatican II (1962-65) has been how they have dealt with bishops' conferences.

Faggioli contends that Francis has recognized the limits of trying to put this particular genie back into the bottle.

"The Catholic church today is globally too big and diverse to give up this new tool for church governance. Pope Francis' teaching is largely based on the previous teaching of bishops' conferences (national and continental) and in a way, this is Pope Francis' way to encourage bishops' conferences to develop and reclaim their own role. This is not happening yet: bishops' conferences today are stuck in the change of paradigm between the Wojtyla-Ratzinger [Popes John Paul II and Benedict XVI] era and the future. But this is a problem much more for the European and North American churches than for the rest of the Catholic church."

Fr. Lou Cameli, the Chicago archbishop's delegate for formation and mission, acknowledged the differences in outlook and style among the popes of the last 50 years, but he sees underlying, foundational points of continuity in the post-conciliar era. When asked to identify these, he highlighted six:

Cameli is on to something important. Take Pope John Paul. The conciliar text he cited more than any other in his own magisterial writings was Gaudium et Spes 22, which placed Christ at the center of Christian anthropology. As noted two days ago, John Paul was deeply influenced by Communio theology. His sense of the value of dialogue was stronger outside the church than inside, but he was fully conversant with the major intellectual and political trends of his time. He engaged the world, visiting many countries that the rest of us ignore. He declined to be crowned with a tiara and shed many of the accoutrements of the papal court.

And, in varied ways, he highlighted the "immediate experiences of faith," Cameli notes, not least his support for new ecclesial groups that have grown to fruition since the council, like Comunione e Liberazione and Focolare, both of which focus on inculcating lay spirituality that brings the faith into everyday life.

It is not difficult to see how Pope Benedict embodied these six touchstones of post-conciliar life.

"Benedict XVI took up the very same themes of Christocentrism, communion, dialogue, worldly engagement, an unencumbering of church life, and the retrieval of more immediate experiences of faith and church," says Cameli. "He did so, however, primarily as a theologian. In this, perhaps his greatest contribution was to link all of these themes of renewal to the Word of God contained in the Scriptures. Because of his erudition and authoritative representation of the tradition, he gave weight to these elements of renewal."

For Francis, with his long experience as a pastor, Cameli believes "the elements of renewal outlined above take on practical ramifications and real world engagement ... unless they can take on real shape in a real world, they are of negligible importance. In fact, much of his teaching (e.g. Amoris Laetitia, or "The Joy of Love," Francis' apostolic exhortation of the two synods of bishop on the family) is directed in this way, the way of real living in a real world."

"After a fat pope, a thin pope." Some of the opposition to Francis comes from those who forgot that a pendulum can only stay true if it swings back and forth. It doesn't keep going in one direction.  (If it does, that is a sign the pendulum is broken.) The tension between a pope who expands the boundaries and one who reinforces them is part of the difficulty for some of those who oppose Francis.

Faggioli says the speech was nonetheless problematic because it entered into a theological debate in a way popes usually do not do. "Pope Benedict's was a highly sophisticated hermeneutical debate offered to the whole church and misused by ideologues."

Faggioli's comment points to the source of the fiercest opposition to Francis: the ideologues, and not just any ideologues, but those whose real problems are not with Francis but with Vatican II. In What Happened at Vatican II, his history of the council, Jesuit Fr. John O'Malley writes of the minority at the council that they were, by and large, proponents of a particular kind of "Roman theology" that he describes as "heavily conditioned by canon law, indifferent to the problems raised by historical methods, and often hermeneutically naïve. [The bishops in the minority] had been schooled to disdain modern approaches to theology as passing novelties or, still influenced by Pascendi and Lamentabili [an encyclical and a syllabus, respectively, by Pope Pius X condemning 'modernism'], to attack them as dangerously subversive."

It is no coincidence that many, though certainly not all, of those with an affinity for the traditional Latin Mass or ad orientem worship are aligned with the opposition to Francis.

O'Malley goes on to observe of these bishops in the minority at Vatican II: "Of them the majority asked a great deal. By trying to convince them to go along with this or that position, the majority essentially asked them to adopt a new mind-set and a new value system and to affirm assumptions they feared and abhorred."

Francis is asking the same, perhaps more, of them. But let us be clear. It is Vatican II that they are resisting, a council that is still being received, and about which future popes and bishops and lay faithful and theologians will have more to say.

If you hate history, or ignore its claims, or at least view the age in which we live with derision and scorn, Francis' commitment to engagement with the world is terrifying, but the council called for engagement. If you hold a theology overly influenced by canon law, Francis is a threat, but then so was the council. If syllogisms satisfy, experience holds no charms for you as they do for Francis. If you think the adult conversation that began at Vatican II and was continued by Pope Paul VI risks posing difficult questions and requiring you to stretch intellectually, you will view Francis' effort to rekindle that adult conversation with suspicion or dread.

But the problem is not him, it is Vatican II, and that was not a problem, and is not a problem: It was a council. We should, with charity, be about the business of receiving that council, not re-litigating it, and that is what some in the opposition really want.