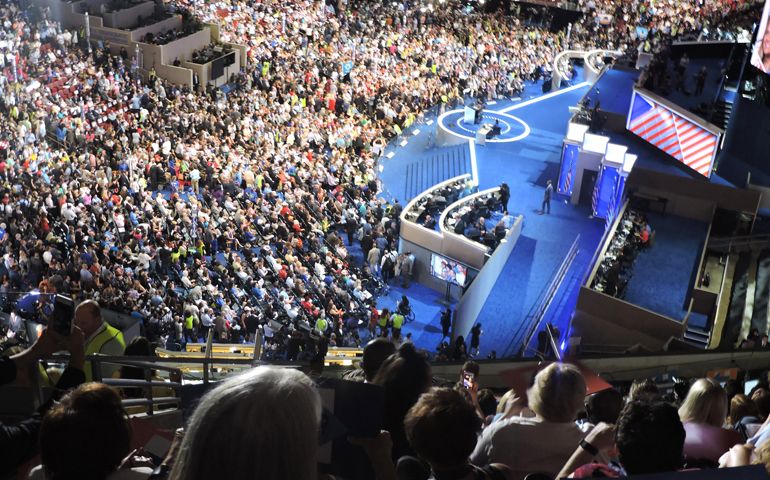 Attendees at the Democratic National Convention can be seen July 26 at the Wells Fargo Center in Philadelphia. (CNS/Elizabeth Evans)

The Democratic Party is in search of its soul. That search is overlapping with a different one, the need to find a new chair of the Democratic National Committee, and much of what afflicts the Democrats is on full display.

The other day I linked to a Politico article about Ilyse Hogue’s candidacy for the post. Hogue is the director of NARAL Pro-Choice America, the abortion rights group. At the Democratic Convention in July, she talked breezily about procuring an abortion and how it really worked well for her, a veritable rite of passage. Somehow, I do not think that is the pitch that will win back the hearts of centrist, rural voters. Indeed, Hogue is part of a younger generation of leaders in the pro-choice movement who foolishly think they need to step away from the "safe, legal and rare" approach to the issue that worked for Bill Clinton in the 1990s. They want to celebrate their abortions. Just so, they radically misunderstand the moral attitudes of millions of Americans, even millions of other pro-choice Americans. Many voters think abortion should be legal because they dread a return to the days of back-alley abortions, but they do not think it is a thing to be celebrated. And they're right.

Former Vermont Gov. Howard Dean has thrown his hat into the race and he brings a unique credential: Dean was, hands down, the most effective chair of the party in recent years. In 2005, he adopted the 50-state strategy, arguing that Democrats needed to have a presence in flyover states, that it could not become an effective governing party if it represented only the coastal communities which are more liberal than the rest of America. Dean made sure there were Democrats running for city council in Utah and for school board in Missouri, helping to build a bench of seasoned candidates for higher office. The Democrats did not turn a ruby-red state like Utah deep blue, but the margins by which Democrats lost in certain rural parts of the country began to diminish. And, the strategy worked as Democrats reclaimed control of the House in 2006, and the Senate and White House two years later.

Dean, however, is a throwback and the Democrats just tried that with Hillary Clinton. It is hard to say the party is looking forward when it reaches back more than ten years to find a new leader. Additionally, Dean's ego was never small and his sense of entitlement shows through even when he does interviews on TV. He is brusque and dismissive of people Democrats need to court. The party should reclaim his 50-state strategy, and seek his advice on implementing it, but they need someone else to be the face of the party.

Labor Secretary Tom Perez is a guy you almost never hear a bad word about. He has fought hard in his career on the kinds of issues that get discussed around the kitchen table, things like raising the minimum wage and fighting predatory lenders. But, he is a creature of the Beltway, starting his political career in suburban Maryland, and in interviews he never sparkles. He is smart: That is clear. Professional politicians and labor leaders like him a lot. He has the reputation of being a workhorse not a show horse and the DNC needs that kind of approach. But, again, I do not see him as the kind of candidate and spokesperson who would immediately grab attention as something different.

Ray Buckley, the state chair in New Hampshire, announced his candidacy yesterday. I met Buckley years ago when researching a story on politics in the Granite State, and he is hilarious, but in a very specific way. A longtime gay activist, I am not sure Buckley's brand of humor would go over well in Montana. And there is video of him in drag. Ah you say, but Rudy Giuliani appeared in drag too! Yes, he did, but he was awful. Buckley was good. Buckley is able and unlike some other state chairs, he delivered New Hampshire for Hillary Clinton, albeit narrowly, and the Democrats picked up a Senate seat there as well. New Hampshire is quirky though, and it is doubtful its political culture has prepared Buckley for the national stage.

The early favorite for the job is Rep. Keith Ellison of Minnesota. Ellison chairs the Progressive Caucus in the House of Representatives and I agree with him on most economic issues even while I wish he were more centrist on social issues. He is also the first Muslim to be elected to Congress. His district is entirely urban, including most of Minneapolis, and suburban. I like the idea of the voice and face of the party being a Muslim: Democrats cannot find their soul by abandoning their principles, and they should not give into any fears that a Muslim leader would not play well in the rural parts of the country that just delivered such an overwhelming victory to Donald Trump.

Some of have voiced concern that the DNC chair is a full-time job and that a member of Congress would have to split their time in ways that would impair his or her ability to be an effective chair. I do not buy that line of argument entirely. Ellison could find a competent chief operating officer to run the shop while he served as the face of the party. My problem with Ellison's congressional gig is different: Congress' approval ratings are in the tank. The party appears to be a creature of the establishment already, and if Ellison were to make the round of the nightly cable or Sunday news shows, he would have the U.S. Capitol dome in the background. That is not what the Democrats need.

I propose that the Democrats search the country as far as they can get from the myopic conversations in Washington, D.C., and ask someone like Michael Hancock, the mayor of Denver, to take the job. Wouldn't it be nice to hear Anderson Cooper say, "And, joining us from Denver tonight. ..." Or, Mayor Karen Weaver of Flint, Mich., a woman who has had to deal with a crisis brought on by that state's penny-pinching, libertarian governor. Or, Mike Rawlings, the former CEO and current mayor of Dallas, Texas. Mayors have to do stuff, they do not get to just pontificate. They have to transcend partisanship daily: Republicans and Democrats both need to have the trash picked up and the potholes filled. Mayors scream: Not Washington! And, guess what: That is what the voters screamed on Election Day too. If the Democrats are listening, they will find someone who can become a new face for the party, and a face that doesn't have the Capitol dome and all the dysfunction that dome now implies in the background. Look beyond the Beltway, Democrats: It is where the voters are!

Faith takes the forefront as Georgia Senate runoffs heat up

The results of the 2014 election