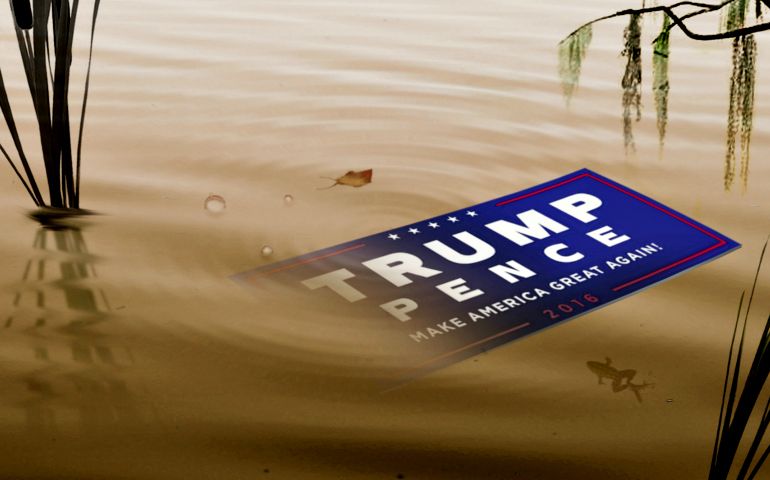 During the campaigns, Donald Trump would often get his crowds chanting in unison, "Drain the swamp." It was an effective line, more effective than Democrats realized at the time. Hillary Clinton had earned the reputation for not thinking the rules applied to her. She and her husband had become millionaires after leaving the White House, and while there was no evidence that they were guilty of petty corruption, there was nonetheless a whiff of something unethical or at least very slippery about them.

The chant was targeted at more than the Clintons, although they were a useful embodiment of the establishment and its perks. The chant was an anti-elitist charge about government being too involved in people's lives, thinking it knows what is best at all times, unconcerned with what average people thought or how they might be affected by government decisions.

This charge was reinforced every time a person had a bad experience at the DMV or with the or saw their health care premiums rise. It had been amplified throughout the Obama years by conservative media that opposed particular regulations and, rather than merely own their opposition, created a narrative about the intrusive nature of government.

Now, it turns out, the whole nation needs to focus on draining the балота. That's Russian for "swamp." You can render it as balota in our alphabet. If the Clintons had a whiff of slipperiness about them, Trump and his team have the stench of something far worse.

A spate of articles has catalogued the various meetings different members of the Trump campaign had with Russian authorities. We are assured by the White House that none of those meetings were consequential, mere "getting acquainted" affairs or, in the case of then-Senator, now Attorney General, Jeff Sessions, routine business. But, in her article documenting the meetings in The Washington Post, Rosalind Helderman raises an important question: "It is unclear why the White House has consistently denied contacts with Russian officials if the meetings that took place were innocuous."

People who are engaged in covering something up usually have something to cover up. In this case, what is the equivalent of the burglary in Watergate? What is the "there" there?

We don't know. The worst-case scenario is that there was some kind of explicit collusion between the Trump campaign and the Russian government. We know that the Russian government tried to influence the election in Trump's favor, as when they released hacked emails from the Democratic National Committee and the Clinton campaign to Wikileaks at a time when the Trump campaign was facing some bad news cycles. Was there a request made? We don't know. We may never know.

But the more you learn about Watergate, the more you realize that it is a mistake to merely repeat the old saw that the cover-up was worse than the underlying crime. That may be true, but it misses a key factor in that scandal: The investigation revealed some truly seedy connections between criminals and campaign officials and it demonstrated beyond a shadow of doubt that some people close to President Richard Nixon were only too willing to break the law to gain their political objective. It happened to come to a head with a burglary, but it would have come to a head one way or another.

Between the burglary and the cover-up was a balota, peopled with the names we all came to know: Ehrlichman, Mitchell, Colson, Haldeman, Liddy.

In the case of the Trump campaign's dealings with Russia, perhaps the investigation will find the equivalent of a burglary. What is already disturbing, however, is the degree to which the Trump campaign had contacts with people who are not only foreigners, but sinister and adversarial foreigners. We would be right to be upset if France meddled in our elections, but Russia? It is a kleptocracy of the worst kind.

Another Washington Post article, by Philip Bump, tried to map the various relationships between Trump's entourage and the Russians. It is an important piece, but the graphic that accompanies it makes an enormous mistake: It lists "Russian businesses" and "Russian government" as different points of contact.

President Vladimir Putin is widely believed to be the richest man in the world, yet he has only earned a government salary his entire life. There is no meaningful distinction between the world of Russian business and the Russian government. Businesspeople who run afoul of Putin tend to end up in jail or worse. Surely, Trump's foreign policy advisers knew this at the time. It is always a dangerous bet about what Trump knows.

We may yet find evidence of explicit collusion between the Trump campaign and the Russian government, but what we already know is enough to conclude that the Trump-Russia scandal involves something worse than a Clintonian sense of entitlement. Here, I submit, is a different kind of corruption. Even if it doesn't look like a typical proverbial smoking gun, it is something very bad. Many people who worked on Trump's campaign and who now work in his administration were willing, and more than willing, to do business with a country that is determined to destroy our influence and undermine our democracy.

Appointees from the world of business like Secretary of State Rex Tillerson and Secretary of Commerce Wilbur Ross may hide behind the claim that they were only pursuing "shareholder value" in their business dealings, but why should that protect them? Why is it OK for a U.S. businessman to set aside the good of the country in pursuit of profit?

Military analysts like Lt. Gen. Mike Flynn apparently thought that it was better to ally with Russia in the war against the Islamic State than not, and there is the precedent of our World War II alliance with Stalin.

But such a conclusion could only be the result of a distorted sense of history and the present. We stumbled into our alliance with Stalin, and did so to face down Nazi Germany and a Japan governed by its military out of control. Both had vast industrial power and other resources. The Islamic State is certainly a threat to the poor people of Iraq, Libya and Syria, but the threat is not the least akin to that posed by Germany and Japan in the 1940s.

In fairness, we should add that Putin is no Stalin either. Still, it is hard to reach the conclusion that working with Russia, intent as it is in undermining our most valued alliances, makes sense in order to defeat a terrorist threat in the Middle East, unless one has a distorted view of the threat posed by radical jihadis. Presidential adviser and EWTN darling Sebastian Gorka certainly evidences this distortion every time he opens his mouth.

Did everyone who worked for Trump fail to see that when you get into bed with dictators, you are likely to get something worse than fleas? Did no one exercise an iota of restraint or self-questioning in their dealings with the Kremlin mafia, mindful that when money and power are swirling about, we can all make bad judgments? Do we really need to find the equivalent of a burglary when this web of relationships with a foreign adversary and criminal government is on full display?

I hold no vatic powers, but I think the answer to those questions is no.

This is a deep kind of intellectual and moral corruption, one that hides behind business standards or distorted ideology to make nice with a Russian government that is an enemy of the United States. I am not advocating that no one ever do business with Russia, or that we never find opportunities to work with them. I am suggesting that the corruption that seems to have taken hold of so many people in the Trump orbit was an unwillingness to even pose the difficult questions, examine the dangers posed by working with Russian officials.

It is a kind of moral malpractice in international affairs that is just as disturbing in its way as the Watergate burglary was in its way, and far worse than any sense of Clintonian entitlement that spawned the chant "Drain the swamp."

Let this be the Democrats' battle cry until an independent investigation gets to the bottom of all this messy, ugly business: Drain the balota!

Once undocumented, now he's running for mayor and hoping to help fix Honduras