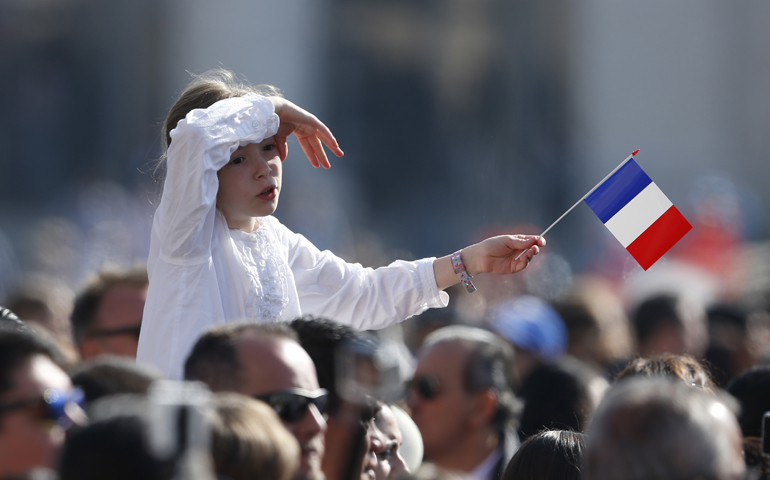 The elections in France were, like the American elections in November, a referendum on the governing elites and the elites lost. But, the good news is that the highest polling candidate, Emmanuel Macron, though a political novice, was not animated by a dark and dystopian vision, but an optimist, fully committed to the European Union.

The shooting in Paris three days before the vote, in which one policeman was killed and another wounded, hung over the balloting like a dark cloud. The ISIS-inspired attacks in France in recent years have made many Frenchmen fearful of their Muslim compatriots, and of foreigners of all stripes. The danger was that this last-minute stoking of the fires of fear would be enough to catapult Marine Le Pen, the French equivalent of Trump, into a first round victory.

The volatility the last-minute terrorist attack played into the volatility of the French electorate. In the pre-election polls, the top four candidates were all within the margin of error of one another. Even more interesting, significant percentages of those planning to vote for one of the four said they might change their minds: 32 percent of Macron's voters said they might yet change, and 34 percent of far left candidate Jean-Luc Mélenchon's voters said the same. A smaller, but still significant margin of those supporting traditional conservative candidate Francois Fillon and Le Pen indicated they might change: 20 percent and 15 percent respectively. These latter, lower numbers no doubt reflect the fact that there remains a core of Gaullists and Le Pen supporters, while Macron and Mélenchon specifically ran as candidates from outside the mainstream parties and neither did they bring long-standing political careers to the race.

In the end, the French electorate said 'non' to the traditional parties, but it also said no to a politics of despair and division. Le Pen will still head to the runoff in May, but she needed to place first to generate the kind of enthusiasm she would need to defeat Macron.

Xenophobia and bigotry has been the raison d'etre of the party of Marine Le Pen, the National Front, since its founding by her father. He focused his animus against the Jews, touching the chord of anti-Semitism that has such a long and tragic history in modern France: The Action Francaise, which combined a fetish for monarchy with an integralist Catholicism, and produced anti-Semitism as a principal by-product, was a precursor to the National Front. Anti-Semitism was buried in the national consciousness after World War II and the subsequent ill repute in which all collaborationists were held, but it never died. Marine Le Pen's only innovation was to re-direct that venom at Muslims rather than Jews. The phenomenon was the same: Defining French identity in opposition to "the other." The ugliness of the politics that flows from such an exclusionary premise was the same too.

Sadly, the vile hatred of the Le Pen family is already manifested in yet another generation, as the granddaughter of Jean-Marie, and niece of Marine, Marion Maré​chal-Le Pen, is active in the party and has been hailed by Steve Bannon as a "rising star." This last point is vital: For all the particularities of French politics and culture, the Le Pens are part of a global movement in which the chief strategist to the President of the United States is a principal. If that doesn't scare you, it should.

For seventy years, the politics of Western Europe and the United States have been based on democracy, human rights, and a certain confidence that we could overcome evil in politics because we had done so in World War II. Yes, the fear of communism was a part of the mix, but it was not usually the dominant element, even less in France and Italy which had vibrant Communist parties in parliament. Confidence, not fear, has been the leitmotif of the postwar era. Trump and the Le Pens represent a politics based on fear. For all the problems of Western democracy, especially in its neo-liberal iteration, the politics of the postwar era has been a time of historic peace and prosperity, all of which is now threatened by the politics of hate and exclusion.

No wonder those who resist this politics of fear see in Pope Francis a champion. The Holy Father shares a deep critique of the neo-liberal order, especially in the economic sphere. But, instead of identifying scapegoats and urging the erection of borders, both national and intellectual, the pope advocates solidarity between peoples and the erection of an economy and a politics of inclusion.

Le Pen told her supporters, "What is at stake in this election is a referendum for or against lawless globalization. Either you choose in favor of a total lack of rules, without borders, with unlawful competition, the free circulation of terrorists, or you make the choice of a France that protects. This is truly what is at stake. It is the survival of France." She is wrong in both diagnosis and remedy. There is no "total lack of rules" in the neo-liberal order as Le Pen suggests: The rules are those of the market which, when idealized and idolized, create an inhumane economy. There is no "free circulation of terrorists" but there is a need, as Antoine de Tarlé​ pointed out here at , for the French government to give the kind of material support to French imams that it once gave to French Catholic institutions, so that mosques can become a part of a vibrant civil society. And, as for the remedy, the "survival of France" requires that Frenchmen remember that their history is one of a proud commitment to humane values, both Christian and secular.

Macron would do well to read Pope Francis' critique of the modern economy. In the U.S. neither party was able to articulate a persuasive alternative to Trump and so Trump first took over the GOP and then beat the Democrats. Not only does Macron need some kind of coherent platform that fleshes out his optimism in order to win the run-off on May 7, but he needs to be able to govern, to plant his flag around a coherent set of ideas to which others can rally. He cannot, like General de Gaulle, whom he invoked during the campaign, stay above the fray of politics and act in a quasi-monarchical fashion. That was then, and de Gaulle was de Gaulle, and this is now, and Macron must provide political leadership of a very different kind.

But, all that can wait for tomorrow. Today, it is enough to celebrate that Le Pen did not do better, that four in every five Frenchmen rejected her brutish vision of France.