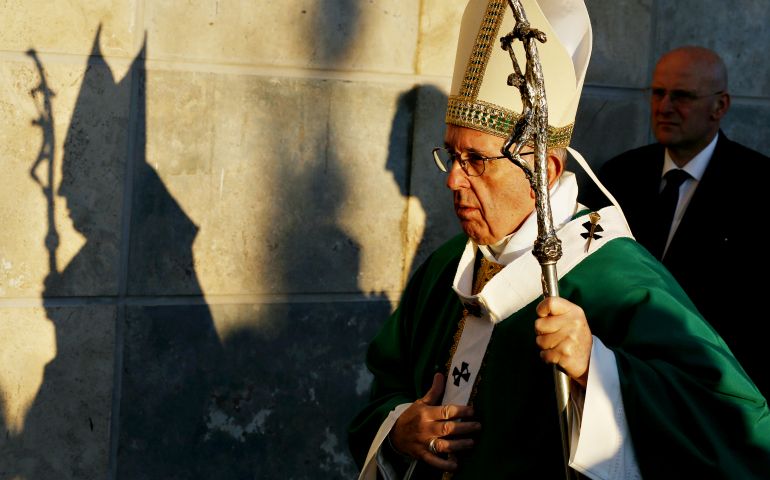 The headline was alarming: "Pope Francis quietly trims sanctions for sex abusers seeking mercy." The reporter, Nicole Winfield of The Associated Press, is one of the most respected in the religion news business. But is it so?

The clergy sex abuse story is the ugliest in the recent history of the Catholic church. Under St. Pope John Paul II, a serial abuser like Fr. Marcial Maciel Degollado, founder and head of the Legionaries of Christ, was not only unpunished, but he continued to receive support and even adulation at the Vatican. Pope Benedict XVI began a serious crackdown on clergy sex abuse, one of the real achievements of his pontificate.

Those of us who have studied the sex abuse crisis know how intimately intertwined it is with an unhealthy culture of clericalism. Just last week, the bishops of Australia acknowledged the role clerical culture played in both facilitating the crimes and the cover-up of those crimes. Bishop Vincent Long Van Nguyen of Parramatta, Australia, himself a victim of sex abuse, was especially withering in his criticism of clerical culture.

So, it is surprising to read that Francis, who is astute generally, and especially so in diagnosing the ills of clericalism, would be backsliding on the "zero tolerance" policy that is the keystone in the church's response to the abuse of children. Again, is it so?

Francis has made mercy a central theme, indeed the central theme, of his pontificate. I can imagine him asking himself: In all these cases of horrible and criminal actions by men vowed to protect children, where is the mercy? Mercy for the victim? Mercy for the 95 percent of clergy who never abused anyone? And, yes, mercy for the abuser?

Francis, and the church he leads, should never, ever apologize for asking where the mercy is in any given situation, even in this horrific one, but I suspect he is astute enough to realize that there is nothing merciful in putting a priest abuser into a situation where he can perpetrate his crimes anew.

And that is my problem with Winfield's story. It rests on the assumption that removal from the clerical state, or defrocking, is a more just, and less merciful, penalty. She has sources who tell her so, apparently even some with intimate knowledge of the workings of the Congregation for the Doctrine of the Faith, which handles these cases. They told Winfield that in some cases, the congregation recommended defrocking an abuser, and the pope offered clemency in the form of a sentence of a lifetime of prayer and penance and no public ministry.

Winfield writes of one such case, that of Italian Fr. Mauro Inzoli:

The Inzoli case is one of several in which Francis overruled the advice of the Vatican's Congregation for the Doctrine of the Faith and reduced a sentence that called for the priest to be defrocked, two canon lawyers and a church official told AP. Instead, the priests were sentenced to penalties including a lifetime of penance and prayer and removal from public ministry.

Why is "a lifetime of prayer and penance and removal from public ministry" a "reduced sentence"? Because, in the clerical culture, which is not unknown in the Vatican Curia, there is nothing worse than being defrocked.

But why do the rest of us see the one penalty as more severe, and therefore more appropriate, than the other?

The key objective is to prevent further abuse. If a priest is defrocked, he is cut loose. I can see why a diocese might wish to be rid of the problem, but say there is a priest who is defrocked because a church investigation found credible evidence of abuse, but there were no criminal proceedings. What is to prevent the abuser from applying for a job that puts him in proximity to children?

Sometimes, if the church finds the priest guilty of abuse but he refuses to cooperate with church authorities, there is no recourse but to defrock him. But by consigning him to a monastery, far from children, those authorities can make sure he is never again placed in a situation where he might abuse children. If the priest refuses to accept and abide by the terms set for his being monitored, the church's authorities will reopen the case, send it back to the doctrinal congregation, and he can be defrocked. This is akin to house arrest, and if he violates the terms, he can still be removed from the clerical state.

The issue of mercy should not be confused with the issue of prevention. An abuser who goes to confession and demonstrates contrition and firm purpose of amendment should be granted absolution, yes? Perhaps, for a variety of personal reasons, a cleric who has abused children would prefer a life of penance and prayer at a monastery. He may not want to have to find a job. He may not want to enter into the secular world. He may be truly sorry for his sins.

In the past two months, Francis has done three things that make me think he is not interested in coddling clerical abusers. First, just this month, he published comments in the introduction to a book by Daniel Pittet, a Swiss victim of clergy sex abuse, in which the pope called such abuse "a monstrosity."

Second, he appointed Cardinal Sean O'Malley, the church's cavalry on the issue, to the Congregation for the Doctrine of the Faith.

Third, in late December, he sent a letter to all the bishops of the universal church calling for zero tolerance of clergy sex abuse.

Previously, he took the step that even Benedict had not taken, establishing a process for removing bishops who were negligent in handling clergy sex abuse cases. These actions simply do not add up with the narrative emerging now.

Let me offer a different interpretation. First, officials at the doctrinal congregation, like officials at the State Department, get upset when the boss doesn't take their recommendation. And, as mentioned, to them the worst thing that can happen to a priest is to be defrocked. They are feeding the narrative because it justifies their original recommendation.

Second, and more dangerously, those who oppose the Holy Father for other reasons are perfectly willing to use the issue of clergy sex abuse, mindful of its explosive potential, to derail this papacy.

There is a final reason that the narrative that Francis is backsliding has legs. There is a side of us that does not want to believe that there is mercy available to the perpetrators of clergy sex abuse. We want punishment, and the more severe the punishment, the better.

This wonderful pope, who is so committed to extending mercy to all in the name of God, the Father of Mercies, does not strike me as singularly naive when it comes to clergy sex abuse. If he grants an abuser one sentence rather than another, I do not care if that is seen as clemency. I care that it keeps the priest from abusing anyone else. I suspect the pope sees it that way too.

San Francisco priest: Clericalist attitude evident in some priests of all generations