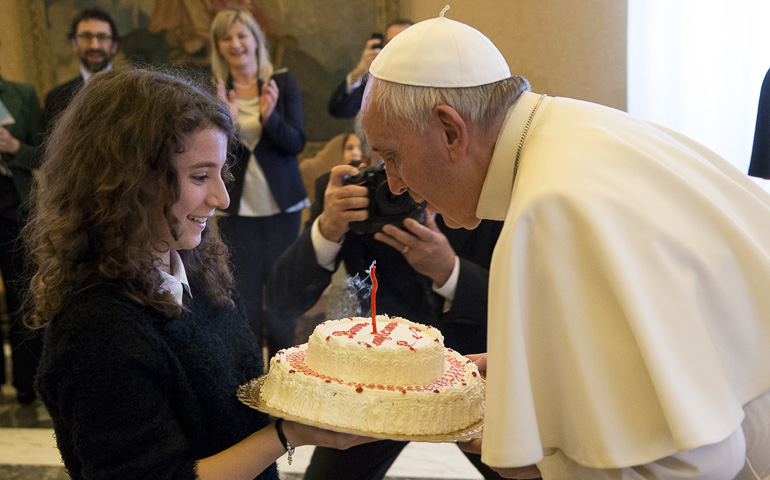 Pope Francis blows out the candle on a birthday cake presented by a young member of the Italian branch of Catholic Action during an audience with the group at the Vatican Dec. 17. (CNS/L'Osservatore Romano, handout)

Today, Pope Francis turns 79 years old. Happy birthday Papa Francesco! My esteemed colleague John Allen recently speculated about what would happen after Pope Francis dies or resigns and, a week later, speculated that Pope Francis would have a major health crisis this year. I am not in Rome watching the Holy Father close up, but my sense is that he is in great shape and he is not going anywhere fast. He looks younger today than the photos of him in Buenos Aires made him look.  My sense is also aligned with my hope: Pope Francis has more work to do and it is virtually impossible to imagine anyone else undertaking that work at this moment.

Looking at the pope’s schedule for Mexico, it is grueling. I suspect for security reasons, he will be flying back to Mexico City every night during the trip. And, Mexico City, like the two cities he will visit in Chiapas -- San Cristobal de las Casas and Tuxtla Guttierez -- are all far above sea level and take a bit of getting used to for younger folk than the pope. But, as we saw in Africa, the man is tireless and seems to gather strength during these trips. Think of how grueling the trip to Cuba and the US was? And, as he climbed the stairs to the place the last night, he had to catch himself at the top. But, the night before, he delivered that extraordinary ex tempore homily to the people gathered for the World Meeting of Families, speaking from the heart and without notes for half an hour, and not missing a beat. Or, how, on his last day in the Central African Republic, he had the presence of mind to invite the imam to ride in the popemobile with him, demonstrating for all watching that religions need not be in conflict.

More opaque than his physical stamina during the trips, but perhaps providing even greater evidence of Pope Francis’ stamina is the fact that day in and day out, he struggles to reform the curia, and he has not wavered in his determination one iota. These struggles are more arduous than a trek through Africa or Mexico! The subculture of the curia had many strengths, but one of them was not a capacity for self-criticism. That recently published “open letter” from a former staffer in the curia amounted to one, long, “how dare you?” to the pope, even though it was obvious to everyone that the curia had, by the time Benedict XVI resigned, shown itself completely incapable of assisting the pope in the governance of the universal Church. Mired in corruption, both petty and serious, and both financial and moral, the curia had been staffed by a man, now a saint, who was not a very good judge of character, St. Pope John Paul II, and then turned over to a man, Pope Benedict, who seemed incapable of taking the managerial steps needed to root out the rot. We all witnessed the consequences, and there will be more to learn as the money trails lead to yet more evidence of corruption.

Daily, Pope Francis confronts a subculture that had not only grown accustomed to that corruption, but in which those who rose to power and influence did so without challenging the prevailing way of doing things, or by challenging it ineffectually, or by focusing on other things as if it was a thing of no moment that the central governing bureaucracy of the Church had failed to function, even on its own terms. Such subcultures do not lend themselves to quick change and wickedness is inventive. But, slowly, methodically, Pope Francis and his advisors, those on the Council of Cardinals but also key cardinals like Washington’s Cardinal Donald Wuerl, are reforming what was considered impossible to reform.

There is a reform deeper and more important than the weeding out of corruption and the practices that allowed corruption to flourish. For decades, certain conservative champions of John Paul II, and less so of Benedict XVI, argued that the Church needed to draw clear lines distinguishing it from the ambient, secular culture. I think Pope Francis agrees on the need for Catholicism to be distinctive, but his sense of what those distinctions should be are vastly different from the distinctions favored in recent years. Where the conservatives were focused mostly on the distinctive ways Catholics should engage pelvic issues, and were all too willing to undermine Catholic social teaching, Pope Francis’ trenchant critique of modern consumer capitalism, and its stepchild of globalization dominated by the investor class, shows how he sees Catholic distinctiveness. Even more deeply, instead of building walls, he believes that what should most distinguish the Church and its leaders is the ability to build bridges. Hence, the imam in the popemobile. Hence, the utterly nonpartisan speech to the US Congress. Hence, the focus on working with the scientific community to build a consensus to force political action on greenhouse gases and other forms of environmental degradation. Hence, the appointment of bishops who are not mired in a largely sociological gloom about the forces of secularization.

These reforms are all rooted in the documents of the Second Vatican Council and, even more, in the spirit of the Council, a phrase that had become suspect in years past but which can now be uttered without fear. Which leads to perhaps the greatest reform this still young pope is crafting: Where Pope John Paul II called the Church to “be not afraid,” Pope Francis is not only demonstrating on the world stage what it means to act with a real freedom of the children of God, he is also empowering bishops and priests to shed the fear that they might say something wrong, or they might “cooperate with evil” or otherwise get bruised by engaging those whose lives are not pristine and perfect, to be a Church modeled on the mercy of the father in the parable of the prodigal and behaving like the Good Samaritan.

The Church is the only institution left that waits until a man is in his seventies or late sixties to bestow upon him a position of consequence like the papacy. But, at 79, Pope Francis seems to breathe out youthful, and saintly, vigor. I am not his doctor so I have no idea the actual state of his health. But, no one should be writing his obituary and he sure seems young to me. And he seems to be asking the Church to feel young again too. It is a thrilling experience, for him and for us. May his health be good and his determination as resolute as possible. May his wisdom continue to infect the Church. And, may he be given many, many more years to lead the Church of Christ.