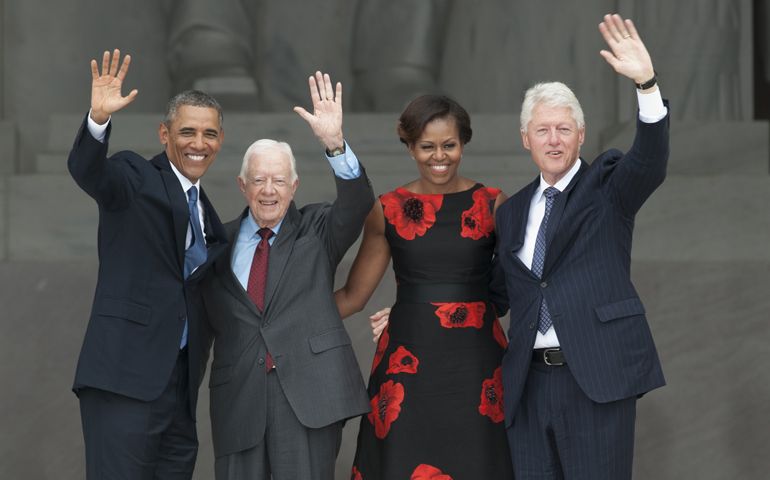 In honor of Presidents Day, C-SPAN issued its survey of presidential historians, ranking the presidents of the United States from best to worst. It is a fun parlor game for everyone, but it is interesting to see how the numbers have, and have not, changed over the years.

The big news this year was the addition of President Barack Obama, who came in at the 12 spot, just behind Woodrow Wilson and just ahead of James Monroe. It is a bit early to judge Obama's presidency: Congressional Republicans seem intent on repealing some of his signature achievements, most prominently Obamacare. The degree to which they are unable to do so will add to his score. And, his extricating the U.S. from the war in Iraq was plenty popular at the time, but might look worse when Clio has her say.

Holding on to the top spot was Abraham Lincoln. Given the crisis he faced, and faced successfully, it is almost impossible to even compare him with other presidents. Great crises demand presidential greatness in a way that less contentious times do not. Still, I do not think anyone can quibble with Lincoln's have earned the top ranking. In addition to his leadership during the Civil War, he articulated the essence of what American ideals can and should embrace and he did so, famously, with malice toward none and charity for all. Had he lived, his reputation might be more cloudy: Making the peace is often more difficult than leading the nation during wartime, and certainly the post-Civil War period posed problems that admitted of no easy solutions, and just as certainly, none were found. Who knows how Lincoln might have healed the nation?

I do have difficulty with ranking George Washington so high on the list. He is currently at No. 2 and has not dropped below No. 3 since C-SPAN began taking the survey. Washington was indispensable to the country, to be sure: Though never a great general, he was a source of national unity because of his military leadership during the Revolutionary War and his lack of political involvement made him the one man around whom all could reasonably rally. His decision not to seek a third term was important for the future of democracy, an anti-monarchical decision that contrasted with his often monarchical habits, such as holding levees and an almost unhealthy attention to small points of personal dignity and honor. And, unlike Lincoln, whose Second Inaugural rings as true today as it did when spoken, Washington's Farewell Address showed an inability to see the value of partisan politics and laid the groundwork in its suspicion of foreign entanglements for one of America's most baneful ideological dispositions, isolationism.

In recent years, the third and fourth spots have been held by the two Roosevelts, Theodore and Franklin. No quibbles here. Teddy Roosevelt, for all his susceptibility to evil racial ideas, introduced the modern progressive movement into the 20th century, harnessing the power of government to rein in the power of the moneyed interest, and to identify and achieve those ends of justice to which the moneyed interest had turned a blind eye if not a hostile opposition. Franklin not only lifted the country out of the psychic depression occasioned by the economic Depression, he was a truly great war leader, not least because he contradicted the advice Washington had offered in his Farewell Address. And, when one considers the infirmities under which he labored, his achievements are truly stunning.

Eisenhower has moved up the list, overtaking Harry Truman. That is lunacy. Ike did some very good things, to be sure. By contemporary standards he would be a moderate Democrat. But, Harry Truman had to cope with the immediate postwar period, he had to make fateful decisions about confronting the rise of Soviet power without triggering a potentially apocalyptic nuclear conflagration, decisions the likes of which no one before him had to make. He was willing to see his party split apart rather than shirk its commitment to civil rights. I rank him alongside his immediate predecessor, FDR.

It is interesting that Bill Clinton has moved up since 2000, when he left office. Then, he stood at 21 among the rankings but now is at 15. I am guessing that back then, the shadow of the Monica Lewinsky scandal and the impeachment saga still weighed heavily on the assessments of the historians polled. Jack Kennedy stands at 8 and Ronald Reagan at 9, although both men did more for the nation's spirit than for its policies.

What we sometimes forget, and which this poll reminds us, is just how forgettable so many presidents have been. In the 19th century, the presidency was a far weaker institution than it became in the 20th century. Those presidents from the 20th century who rank lowest all have a common characteristic: Harding, Coolidge and Hoover were all committed to laissez-faire economics. Nixon is a case unto himself and I think George W. Bush is unfairly ranked too low at the 33 spot.

At the very bottom, we find James Buchanan and Andrew Johnson. I am guessing they could soon have new competition for that cellar slot.

In any event, Happy Presidents Day.

If Only Obama Had Listened

Q & A: Dennis Coyle on the Tea Party

Through the Looking Glass