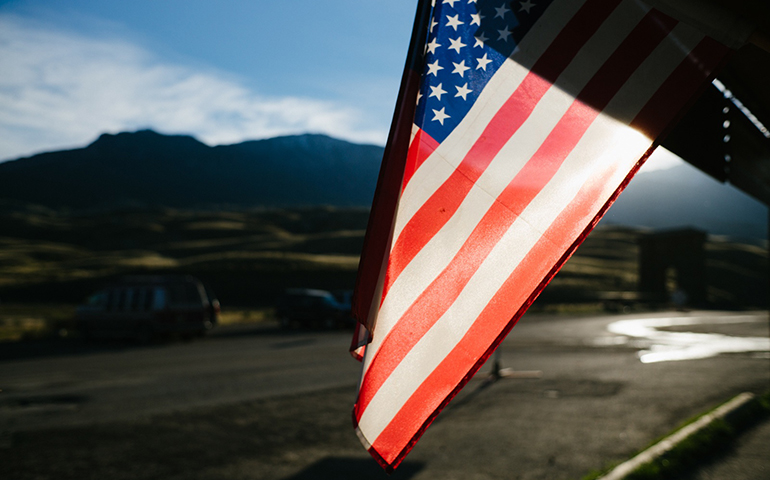 "My country, may it always be right, but right or wrong, my country." Cardinal Francis Spellman, Archbishop of New York and Ordinary for the U.S. military, spoke these words, first uttered by Stephen Decatur, while visiting Vietnam, choosing to side with the president over the pope. The phrase has been spoken, with slight variations, by others in different circumstances and in different countries. It speaks to an understanding of patriotism as having a primary claim on a person's loyalty.

Writer G.K. Chesterton mocked the expression. "'My country, right or wrong,' is a thing no patriot would think of saying," he claimed. "It is like saying ‘My mother, drunk or sober.'"

The phrase is one of those expressions that appears to encapsulate an idea, and a bad idea, but the phrase is actually not as horrible as first thought. After all, although my mother was virtually a teetotaler, had she ever been as rip-roaring drunk as her son sometimes got, she really would still be my mother. America really was Cardinal Spellman's country and Muhammad Ali's country, despite their very different moral stances on the Vietnam War. In this sense, the phrase is a bit like the unjustly mocked phrase "the ends never justify the means," which speaks against a kind of immoral utilitarianism tinged with the suggestion of injustice or violence. But, when you think about it, what else could possibly justify means except the ends?

The phrase, then, is understood to speak to a kind of excessive nationalism which, like excessive anything, is dangerous. And, in the past couple of hundred years, excessive nationalism, like the excessive martial pride of kings in previous centuries, led to slaughter and human misery on an enormous scale. Hitler's nationalism was as much a problem as his fascism, not least because it was the nationalism that made him acceptable to more people than his other, more esoteric ideas. The nationalism of DeGaulle, on the other hand, though it made him prickly to the point that the men who made it possible for him and his nation to breathe freely again, Churchill and Roosevelt, referred to DeGaulle as "the bride," nonetheless had a human grandeur to it, something of Isaiah Berlin's sense that nationalism can be "the straightening of bent backs." The backs at Vichy were nothing if not bent, and DeGaulle stood straight.

As an ideological construct, nationalism quickly runs amok when it is untethered from the differing but obvious universalist impulses of either liberalism and socialism. It is interesting that Catholicism, which is older than the nations, never seems to serve as an adequate check on nationalism; indeed the opposite phenomenon occurs and a local church takes on Gallican tendencies. I suspect that the sense of belonging inherent in religious belief is too closely related to the similar sense provided by nationalism to serve as a check, whereas the individualism of liberal ideology and the class antagonism of socialist ideology do provide such a check on nationalism. This requires more examination and thought -- and by people smarter than me.

Part of the difference, a difference often missed in moral analysis, is that nationalism (and other forms of identity) enjoys a different moral status depending on the circumstance of the people invoking it. Polish nationalism during the years of Soviet domination was a noble thing, correctly appraising in communist tanks a threat to humanity; it was very little like the face of Polish nationalism today which incorrectly claims that Syrian refugees are a threat to Polish identity. A people who are oppressed are entitled to cling to dignity wherever they can find it, and nationalism is often one such life raft of human dignity.

An excess of nationalism is not the only way a person can morally distort the significance of the existential fact that we are all born into a nation as surely as we are born into a family. The opposite danger is expressed in the phrase "patriotism is the last refuge of a scoundrel," a phrase first recorded by James Boswell as having been spoken by Samuel Johnson. Boswell claimed Johnson was not aiming to indict patriotism per se, just an excess of it, and, sure enough, not all scoundrels are patriots and not all patriots are scoundrels.

Nonetheless, there is a pathology, usually found in academic or quasi-academic circles, and always on the left, marked by a kind of visceral hatred of one's own nation. In the case of the United States, we could associate this with Noam Chomsky or the tendentious history of Howard Zinn. Everything America does is ignoble. There is nothing redeemable about the founding. All of our motives are bad, etc. It is as morally obtuse and as intellectually vapid as the jingoism with which it seeks to contrast itself, sweeping in the way all emotionally generated theories must be, incapable of discriminating among facts as to their significance, still less their moral valuation.

I love our country, but I do not love it only because it is mine. That would not really be loving it, but loving me. "To know that a thing is yours is to know very little about it," observed Leon Wieseltier in his splendid essay "Against Identity." There is much to celebrate in our nation's history: Yes, our founders were a bunch of rich white guys, and many of them were slave owners, but they still deserve credit for the way they approached the task of beginning a republic, and much of their handiwork still warms my heart, not least the First Amendment which keeps the press in the U.S. as free as any press in any nation at anytime in history. Yes, American power has been used poorly and unjustly in Central America and Vietnam and Iraq, but the liberation of Europe and Asia, and the rebuilding of both, were unprecedented achievements. People sleep through the night in Sarajevo and Kosovo because of efforts there. In the poorest countries of the world, Americans of good will are found trying to combat poverty and injustice.

The other day, President Obama spoke to the Canadian parliament, and in his speech there were flashes of the candidate about whom I was so enthusiastic back in 2008. He is still wrong about trade, and of course we have seen behind the curtain of his rhetoric these past eight years to the politician who is less than the sum of his parts and far from the loftiness of his language. Still, he spoke movingly about tolerance, which too many of my conservative friends treat as if it were a niggardly virtue, a small achievement of our nation and our national culture. It is not. Pick a country or a century, and you will see the ugly human cost of intolerance. More than our military might, and in spite of our increasingly gross and debilitating wealth, it is our tolerance that is worth celebrating this weekend. And, of course, this too can be taken to an extreme as we see with college campus speech codes and "safe zones." Nonetheless, between the extremes of jingoism and self-hatred, there is plenty about America that is worth some fireworks and flag-waving and BBQ. Happy Fourth of July to one and all.