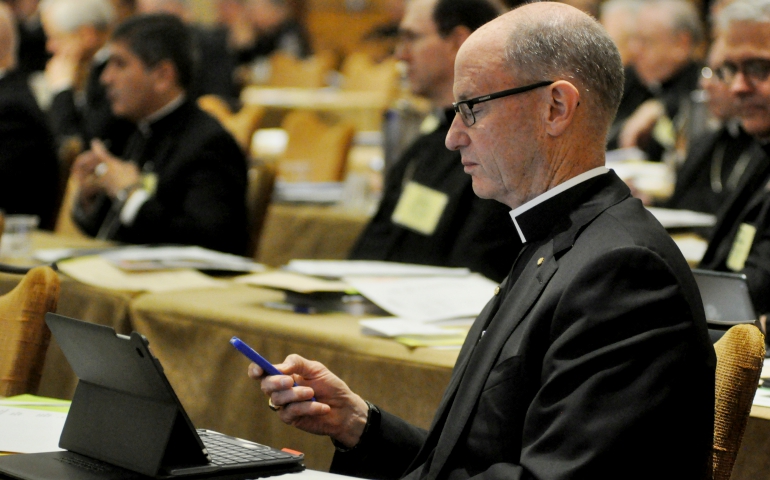 As I suggested on Monday, the controversy surrounding the Land O'Lakes document on Catholic higher education receives an inordinate amount of blame for the secularization of Catholic colleges and universities when, in fact, causality over five decades is a difficult thing to prove. Still, if Land O'Lakes was seminal, it might deserve blame if there is blame to be assigned. Is there?

Bishop James Conley of Lincoln, Nebraska, certainly thinks there is blame to go round and places way too much of it at the feet of the drafters of the Land O'Lakes document. Here are some of the key charges he set forth in a recent talk:

It [Land O'Lakes] rejected the authority of the church, and of her doctrinal teaching. It rejected the idea that faith and reason work best in communion with one another. It prioritized the standards and culture of secular universities over the authentic mission of Catholic education. It was a statement of self-importance, and self-assertion. ...

The loss of the Catholic university as a reliable and faithful place for formation left more than one generation of Catholic adults unformed — spiritually, intellectually and personally — to live according to the Catholic faith. ...

The Land O'Lakes statement was born of a temptation to measure the credibility, effectiveness, impact and importance of Catholic universities according to the standards of the world. To confuse influence, sophistication or social acceptance with virtue and fidelity. To chase after the faddish trends of the moment, instead of being grounded in perennial truth.

Conley is a very nice man, but a man in need of a fact-checker. Land O'Lakes, like the Second Vatican Council, saw the need to recognize a certain autonomy in different social spheres, but it did not comment at all on the church's teaching authority, still less "reject" the idea that faith and reason are related. It certainly wished for Catholic schools to become excellent in ways no Catholic schools were at that time, but the text prioritized several objectives at once: Put differently, Notre Dame's decision to have a chapel and resident priest in every dormitory was not an example of aping Stanford or Harvard.

It is true that many saw pre-Vatican II Catholic schools as places of spiritual formation, more than intellectual education, but one of the more notable theorists of education, Cardinal John Henry Newman, certainly did not. As for the last quote above, while it is undoubtedly true that the modern academy produces a most regrettable number of fads, you don't have to adopt a vulgar and populist stance to note that fact: What is wrong with sophistication?

It is telling that Conley's talk was published at the poorly named Cardinal Newman Society, an organization that claims to be the gatekeeper for Catholic identity but really only champions sectarian schools in the mold of Steubenville, Christendom and Ave Maria. Its president, Patrick Reilly, looks the other way when business schools at Catholic universities instruct students in theories about "economic freedom" that directly contradict Catholic social doctrine, but woe betide a university administrator who signs off on a performance of "The Vagina Monologues."

Reilly wrote that Land O'Lakes caused "devastation" and casts aspersions on Msgr. John Tracy Ellis, suggesting that Monsignor wanted prestige more than excellence. Having sat in the late monsignor's classroom and sweated his exams and papers, I can assure Reilly that Monsignor cared about excellence. He was also a great churchman.

Reilly also argues that a desire for lucre was a motivating factor, and that there was something sinister here. Of course, in 1967, higher education was not yet as expensive as it would become. Furthermore, Tilton v. Richardson (1971), Lemon v. Kurtzman (1971) and Hunt v. McNair (1973) had not yet been decided, all of which would deal with the subject of federal aid to religious colleges and higher education, although university administrators knew such decisions were coming.

Whether the concern to access federal funds was primarily a monetary concern or simply, like the election of President John F. Kennedy, a sign of joining the mainstream, we should be wary of attributing bad motives. I have come to wish we RCs had been more critical about joining the mainstream, but then I have never experienced the prejudice that our forebears did.

In 1990, St. Pope John Paul II issued Ex Corde Ecclesiae, which treated the subject of Catholic higher education. Reilly and his ilk argue that the papal document repudiated Land O'Lakes. I think it would be closer to the mark to say that Ex Corde criticized some of the subsequent developments that falsely claimed warrant from Land O'Lakes. On the 20th anniversary of that encyclical, I interviewed some leading Catholic educators and they certainly did not adopt the Manichaean interpretation favored by Reilly.

Those who divide the world along these fake fault lines have a difficult time explaining some delicious complications. For example, if John Paul II shared the horror of Conley and Reilly at the Land O'Lakes text, why did he name one of the signatories, Fr. Theodore McCarrick, archbishop of Newark, New Jersey, in 1986; archbishop of Washington in 2000; and cardinal priest of Sts. Nerei et Achillei in 2001?

Generally, more liberal Catholics reacted to Ex Corde with horror, but they also, and strangely I think, reacted to it in a very legalistic way, objecting mostly to the requirement that theology professors obtain a mandate from the local bishop.

A bishop once asked me what I thought of the mandate and I said, "I would have no problem employing a professor who had not gotten one, but I would be worried about a professor who declined to even apply." By that, I mean that a Catholic university should make room for scholars who are not even Catholic, and I don't have a problem with a Catholic theologian who disagrees with a particular teaching of the church. Far more worrisome are those who think peer review is sufficient to determine truth within the theological enterprise, who does not see the essential ecclesial role of the theologian.

More importantly, why did the Catholic left resist the concept of Catholic identity? Because conservatives had claimed it? Here is my message to the Catholic left: Take it back. Do not take it back in a foolhardy way, thinking that it is possible to ignore the magisterium when it is through the church that God provided "the data" that is the subject of Christian theology.

And do not take it back in an effort to bless your brand of politics the way conservative theocons have. Let the church's rich, complex, thick intellectual tradition provide both a stance from which to critique our society and our politics, including our own politics, but also to flesh out what we believe in faith: Christ is ever new because he is eternal, and he is only eternal insofar as he is ever new.

I shall conclude with my two major criticisms of Land O'Lakes: First, the shift to lay boards may have freed the modern university from clerical control but, far too often, it has put our universities in the hands of very rich people with all the biases that portends. I recall hearing a university president speak about his reasons for not allowing a union on campus. He mimicked the Koch brothers, not Leo XIII. When asked why he thought these statements were true, he said he had heard them from his board members.

I often hear bishops complain that they are told, "You couldn't run a business that way," when, in fact, the church is not a business. Neither is a university. I propose that all Catholic institutions include on their board some labor leaders and other civic leaders, not just those with means.

Second, the signers did not keep meeting as they suggested they should do. The conversation seemed to stop, when it needed constant updating and adjustment. Yes, Land O'Lakes may represent the end of the pendulum's arc, and Ex Corde set to push the pendulum in the other direction. But that is how humans walk through history. And in higher education, as in the rest of the life of the church, we are still receiving the teaching of Vatican II.

What I wrote in December about the church as a whole seems a good way to conclude this discussion of Land O'Lakes and its opponents as well:

If you hate history, or ignore its claims, or at least view the age in which we live with derision and scorn, [Pope] Francis' commitment to engagement with the world is terrifying, but the council called for engagement. If you hold a theology overly influenced by canon law, Francis is a threat, but then so was the council. If syllogisms satisfy, experience holds no charms for you as they do for Francis. If you think the adult conversation that began at Vatican II and was continued by Pope Paul VI risks posing difficult questions and requiring you to stretch intellectually, you will view Francis' effort to rekindle that adult conversation with suspicion or dread.

But the problem is not him, it is Vatican II, and that was not a problem, and is not a problem: It was a council. We should, with charity, be about the business of receiving that council, not re-litigating it, and that is what some in the opposition really want.