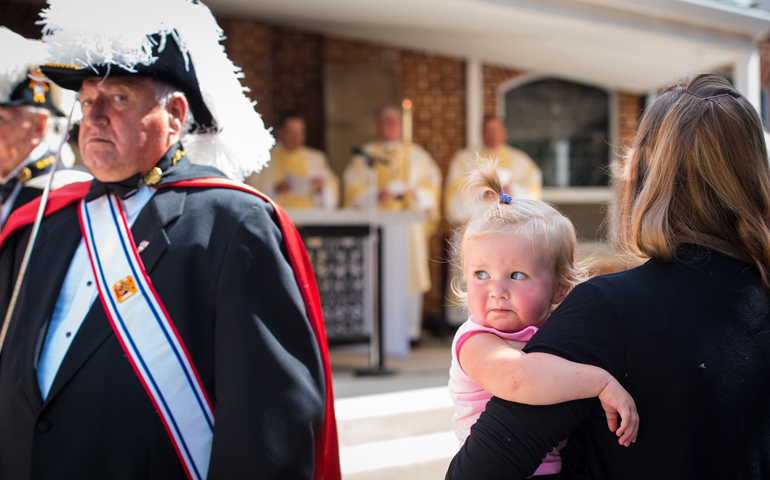 Fifteen-month-old Charlotte Kerscher, held by her mother, Laura, watches the Knights of Columbus honor guard process during an outdoor Mass at the National Shrine of Our Lady of Good Help in Champion, Wis., Aug. 15, 2016 (CNS/Sam Lucero, The Compass)

My colleague Tom Roberts' look at the finances of the Knights of Columbus sent shockwaves around Catholic circles yesterday. Like Roberts, I commend the Knights for all the wonderful work they have done since their founding in 1882. The questions raised by Roberts' reporting do not detract an iota from that work, yet they are important and they all come back to one larger question: Is it time for new leadership at the Knights of Columbus?

The first question is whether it is healthy for a Catholic organization to have so much money, and therefore so much influence, combined with an evident willingness to use that influence entirely in one direction. Most charitable organizations stay away from politics, but not the Knights. As Roberts' article demonstrates, they fund a variety of conservative political causes and organizations, especially those like the Ethics and Public Policy Center, which shape the public conversation about the role of religion in American culture. If the Knights are to maintain the common perception of them as a charitable organization, they need to demonstrate restraint in using their influence in the political sphere, or at least seek to strike a balance.

And the problem is not simply politics. The Knights deploy their influence within the church as well. Would Anderson serve on so many Vatican commissions if he did not have such a large checkbook? Will bishops challenge the direction the Knights are taking within the church, funding conservative media outlets like Crux and EWTN, when they know that the Knights have such large influence? Will staffers at the U.S. Conference of Catholic Bishops more easily embark upon a conservative project, knowing they can get Knights money for it, but decline to initiate a more progressive project, mindful that they will have to raise the money elsewhere? The Knights jumped in to rescue the white elephant John Paul II Shrine founded and funded by the Archdiocese of Detroit. Other bishops noticed and made a mental note: If I am ever in trouble, I may need to turn to them too. That creates enormous influence.

As professors Massimo Faggioli and David O'Brien indicate in the article, the Knights represent that brand of Catholicism that believes Catholicism has "lost its edge, its identity and maybe even its integrity" over the past half century, as O'Brien said. And they have "come up with issues that create the difference between you and other religious groups and with the culture. These guys have figured out a way to build a popular following by combining their politics with the faith." The Knights are the bank for the culture wars if you will.

But, like other culture-warrior Catholic conservatives, the Knights do not challenge every aspect of the dominant culture. Take a look at their salaries. It appears that the Supreme Knight took a pay cut in 2015, so that year he only made $1,277,232. He made more than $2 million the year before. To be clear: If Anderson were paid $400,000 it would still be too much, but more than a million?

The comment by the Knights' spokesman, Joseph Cullen, makes my point better than I can. He said that an analysis of Anderson's compensation "by a well-respected [and unnamed] external consulting firm — shows that 75 percent of CEOs within a market comparative group are compensated overall at a higher rate than he is. Our CEO is responsible not only for overseeing the operations of a charitable organization but the operations of a Fortune 1000 life insurance company as well." How many times has Pope Francis reminded the Church that we are not an NGO, let alone an LLC! Who cares what the leaders of Fortune 500 companies make.

The Knights are a Christian organization and pay stubs in seven figures are simply not consistent with the Gospel call to poverty. If Anderson wants to be paid like a CEO of a major, secular corporation, let him go work for one. It is ironic that Anderson, like so many conservative Catholics, is a frequent critic of secularization, and urges Catholics to stand apart from the ambient culture when that culture challenges our faith, to make our "Catholic identity" clear, but that desire to be countercultural apparently vanishes when it comes time to calculate his compensation.

It is ironic, too, that the Knights have earned a reputation for their spirit of volunteerism. The members not only donate money and pay dues, but they give their time and do so at no cost. I wonder what they think about the organization feathering so many beds, and with such feathers, while the charism of the order is so obviously different. Cullen reminds us that Anderson is also a CEO of the Knights' large insurance company, which is true, but if you are going to invoke a corporate model, shouldn't you follow it? Anderson did not rise through the ranks of an insurance company, developing the kind of expertise that might warrant such a large salary.

Anderson is not alone. You look at the salaries of football coaches at Catholic schools and CEOs at Catholic hospitals. And you wonder why we sometimes lose track of our sense of mission. I do not begrudge anyone a living. I understand, too, that in certain occupations, there are expenses that a lowly writer who works from home does not have. I suppose CEOs need several suits, and I only need one. They may have to fly around more than I do, although I suspect the company pays that tab. But, when so much of what is wrong with the West is rooted in the idolatry of money, wouldn't it be great to see our Catholic organizations look a little harder for leadership that grasps how morally obscene it is to make hundreds of thousands of dollars a year no matter what you do? Couldn't we see a little more Christian witness in this area?

I also want to highlight a specific concern about the political spending by the organization, and draw what I think is an important distinction. I applaud the Knights for their efforts to promote a culture of life, and to defend the unborn, but the Susan B. Anthony List, which received $1 million in 2014, is more of a Republican operation than a pro-life one. In 2010, they did not target pro-choice Democrats in the midterm elections, they targeted pro-life Democrats. The group argued that voting for the Affordable Care Act invalidated the pro-life credentials of these Democrats because the law permitted federal funding for elective abortion. In fact, it did no such thing.

I would not give two cents to the Ethics and Public Policy Center, not least because it provides a handsome position and salary to George Weigel, a man who can no longer even pretend to be anything but a critic of the Holy Father. Still, at least the organization deals with religion in the public square and while it leans heavily to the right, it is not explicitly partisan. Same for the donations to the Becket Fund. They lean heavily to the right, but at least they are involved in the defense of religious liberty, an obvious concern of the church too.

But why do the Knights, which profess fidelity to the pope and the bishops, give money to the Federalist Society? The organization has precisely no religious mission. What is more, the Federalist Society website states, "The Federalist Society for Law and Public Policy Studies is a group of conservatives and libertarians interested in the current state of the legal order." Pope Francis just denounced libertarianism in the clearest of terms, a denunciation that was hardly novel, echoing papal teaching at least as far back as Pope Pius XI.

The Knights underwrite about a third of the budget of Crux, edited by former Vatican correspondent John Allen. Allen told Roberts, "Our agreement with all our sponsors is that editorial control remains with us, and they've all respected that." Yet, the online magazine tilts hard to the right and features a host of papal critics such as Fr. Raymond de Souza and former priest Thomas Williams, who also works for Breitbart.

One other area of funding is remarkable. Giving $1.5 million to the Archdiocese of Philadelphia and $435,000 to the Archdiocese of Baltimore makes me want to ask the Knights at our local parish: You pay dues, how come our diocese is not getting such handsome checks from Mr. Anderson? I would not object if they were giving such large sums to desperately poor dioceses in the Global South, but Philadelphia?

It is time for new leadership at the Knights. It was a mistake to hire a political operative as supreme knight, and not just any political operative, but one who got his start working for Sen. Jesse Helms, a racist bigot who did as much to poison race relations as any politician of his era. It would be one thing if Mr. Anderson were a native of North Carolina: Everyone is allowed to get a start with their home senator. Anderson is not from North Carolina. I know from mutual friends that he loves the church, but lots of people love the church and they are not able to wield such great influence because they do not control the purse strings of the Knights.

The Knights will continue to do good work, to be sure, no matter who is in the leadership. But, they can do that work without also funding a bunch of right-wing causes in both church and state. They tarnish their own efforts by engaging in partisanship and near-partisanship as their 990s reveal. The bishops who provide cover for the Knights, and show up in such great number at the annual convention, they need to start asking questions about this funding, or stay away entirely until the organization charts a new, less politicized course. And, they should insist that Anderson retire and that his replacement be someone committed to having the Knights justified reputation for charity no longer be sullied by the role it has acquired under Anderson of being the banker to the culture wars.

A version of this story appeared in the June 16-29, 2017 print issue under the headline: Knights of Columbus are a culture war bank.