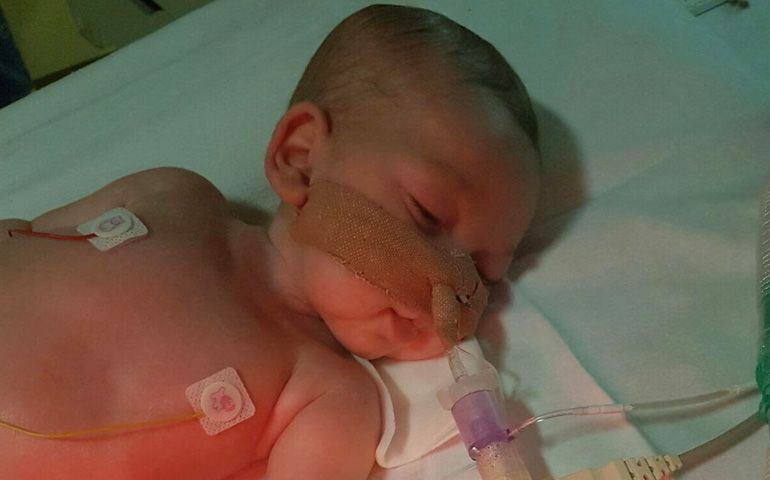 Charlie Gard, who was born in England with mitochondrial DNA depletion syndrome, is pictured in this undated family photo. (CNS/family handout, courtesy Featureworld)

By the time you read this, little Charlie Gard might be dead. The not quite one-year-old British baby with a severe condition that keeps him from breathing on his own is struggling for his life. The case has garnered worldwide attention after the British courts ruled that Charlie should be taken off life support against his parents' wishes. The parents want to send him to the U.S. for an experimental treatment.

Little Charlie is fighting for his life not only against his own physical condition but against our culture's equally crippled moral condition. His situation is tragic, and our culture has lost its capacity to recognize tragedy. Problems, even problems of life and death, now fall into two categories. There are those problems for which there is a technological fix and there are those problems that lack a technological fix. These latter problems our societies in the West now wish to dispose of as quickly as possible. Got pregnant when you weren't planning? Go get an abortion. A hardened criminal with only a slim chance of rehabilitation? Stick a needle in his arm. Crime and violence destroying our cities? Don't really pay much attention, certainly not to the need for more restrictive gun laws.

It would be one thing if Charlie's parents had never used extraordinary means to save his little life. It would even be a different thing if it was his parents who wanted to take him off life support. That might still be morally wrong, but who would stand in judgment over them. But, to have a court order him taken off life support, in opposition to his parents' wishes, that is very, very creepy. Little Charlie can't make his own wishes known. His parents, empowered legally to make medical and other decisions for minor children, wish to try everything to keep him alive. But, the courts made the judgment his life is not worth living and decided to let him die.

Actually, that is not quite right. The passive voice is misplaced here. The courts are not planning to "let him die." They are planning what amounts to a judicial murder. The authorities intend for him to die, and intention is what differentiates murder from a tragedy. As Charlie Camosy pointed out in an essay at Crux, "Suppose, for instance, that when Charlie is taken off of life support he actually continues to breathe on his own and refuses to die. Will those who made the decision be pleased with this outcome? Of course not."

The Holy Father issued a statement urging the civil authorities to let Charlie's parents do all they can to save their boy's life and to accompany him as long as he is alive. How could he not? The pope has warned repeatedly against a "throwaway culture" and here was have a perfectly horrible example of such cultural degradation.

President Donald Trump also weighed into the case, offering to do all he can to save Charlie. This is odd. Trump is moved by the need to help a single infant in the U.K. get the health care he needs at the same time he is pushing for legislation that will deny access to health care to some 22 million Americans. The professional pro-life caucus is falling all over themselves in praise of the president. "The fact that President Trump would speak out on behalf of Charlie Gard shows a remarkable sensitivity to the life issue and a depth of commitment that evangelicals and faithful Catholics will find encouraging and inspiring," gushed Ralph Reed of the Faith and Freedom Coalition. No, Ralph, his speaking out on little Charlie's behalf while trying to kick millions of Medicaid only shows a remarkable capacity for inconsistency on the president's part and sycophancy on Reed's.

When a loved one is dying, every moment is graced. I suspect that must be even more so when, as in this case, the loved one dying is a child. The spirit of euthanasia denies grace and sees only what is deemed a quality of life, not a life itself. It is the powerful who get to decide what counts as quality, and the first to be written off the list are always the handicapped, whether the person doing the writing is a British Court today or a Hitlerite camp commandant in the 1940s. It is barbaric.

It is shocking that so many liberals decline to take up the fight against euthanasia. I am sure it is linked in their minds, correctly, with the fight against abortion. Liberals do not want anyone challenging individual autonomy in such situations, even though it is only the autonomy of the powerful that is consulted. Some of us are liberals because it is part of the history of liberalism to stand with the little guy, to affirm the equal dignity of all men and women, whatever the "quality" of their lives. In the case of abortion, the autonomy of the woman is, to some people, more important that the protection of the life of the unborn child. I think such people are wrong. But, in this case, no one's autonomy is being pitted against Charlie's life. His parents want to provide him whatever treatment they can. Denying them this wish crosses a new and more hideous moral line. Who can defend such a thing?

Pope Francis' Letter on the Jubilee of Mercy

Trump's most insidious claim yet