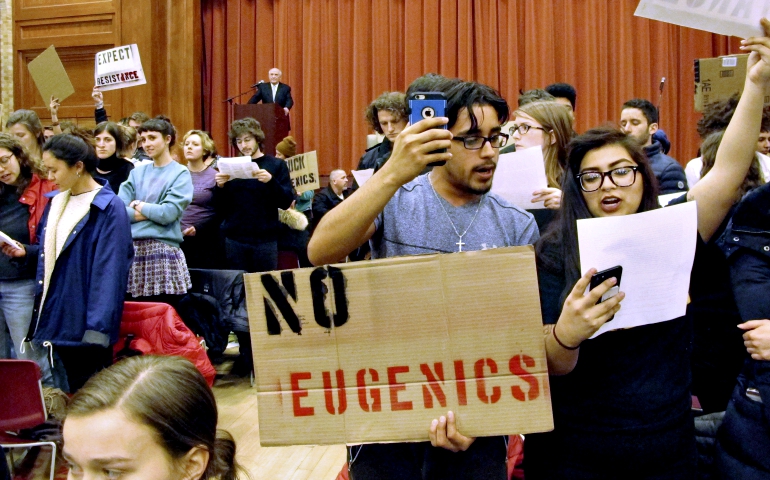 The recent "riot" at Middlebury College in Vermont highlights so much of what is wrong with contemporary liberalism, and with America's elite colleges and universities, at first I thought the reports were some kind of gag. True, it was not much of a riot, although a professor was "roughed up." But this is no one-off. There is something ill, and illiberal, in American higher education.

The conservative writer Charles Murray was invited to speak March 2 at Middlebury, where students pay a little more than $61,000 per year in tuition, room and board. Murray was invited by the campus chapter of the American Enterprise Institute, where he has been a fellow since the 1990s. Murray is best-known for his ridiculous book The Bell Curve, published in 1994, in which he argued that there were innate differences in intelligence between the races and gathered a host of scientific data to make his case.

Regrettably, at the time of the book's publication, The New Republic was being edited by Andrew Sullivan, who cared more about making a splash than about ideas, and he published a lengthy excerpt. This provoked a wonderful response from the rest of the editors in the next issue of the magazine, including one of my favorite lines of all times, in which Leon Wieseltier challenged the philosophic premise of Murray's supposedly scientific argument: "There is not a graph in the world that will explain the place of graphs in the world."

Ironically, an article at Politico that tried to explain, and partly excuse, the context for the riot at Middlebury, stated the protesters viewed Murray as "a flamethrowing pseudoscientist," which they very well might have, but the correct charge is that he is a pseudophilosopher.

A second irony about the protest was that some students held signs reading "No eugenics." I agree. I am wondering, however, if those students will protest the nearest Planned Parenthood abortion clinic. There is widespread uncertainty about the percentage of children diagnosed in utero with Down syndrome who are aborted, but it seems to be well over 50 percent and some say as high as 90 percent. Whatever the percentage, it is eugenics, the intentional killing of someone because they are perceived to be humanly deficient.

The Politico article noted above makes some valid and important points about the zeitgeist, and how that may have played into the tension on Middlebury's campus. The presidency of Donald Trump is the culmination of a series of events and cultural trends that do seem to have put the whole country on edge, and nowhere more so than on the issue of race.

Race continues to stalk our politics and culture in ugly ways, but there is good news too: Love conquers all. Last month, Pew released a new analysis of Census Bureau data and it found that 17 percent of all newlyweds were married to someone of a different race in 2015. That is up from 3 percent in 1967. Latinos are much more likely to marry someone from a different race, so these newest of immigrants are not only renewing the church in this country, they are taking the step most likely to obliterate racism.

Nonetheless, something rotten is going on at college campuses. The violence that greets some conservative pundits on college campuses is outrageous. We all remember the bizarre 2015 Halloween letter controversy at Yale. The creation of "safe spaces" on college campuses has deteriorated into an excuse for intolerance. As Chicago Cardinal Blase Cupich said in his Bernardin lecture:

Without oversimplifying, the challenge for us today is not only that the issues are in silos, separated one from another; it is also that people, in their social networks and through the media they consult, are in silos, bereft of challenge or debate, isolated by differences of opinion or politics, race or social class, in a way that obscures our shared humanity and the ties that historically have united us as a nation of immigrants. It is not too strong to say that this sense of disconnectedness is being legitimized not only by voices in the streets, but also by those in the halls of governance here and around the world, giving rise to xenophobia, nationalism, populism, and racial intolerance. All of this makes entire populations more vulnerable to disturbing influences that only further divide while pretending to offer as solutions distorted views of the role of the economy and politics, how we relate to other nations, and how to deal with global conflicts.

In short, the effects of this variety of illiberal liberalism, like its conservative cousin, are nasty.

Universities exist to teach students to think, not to protect their feelings. Universities are where students transition from childhood to adulthood, and should not be a place where infantilization is encouraged. Universities should be a place where fertile and inquisitive minds are nourished, not where students are encouraged to find creative ways to appeal to their victimhood. (NB: If you can afford $61k for a year of college, you are not a credible victim.)

Universities should encourage the free exchange of ideas, without which they will necessarily devolve into some kind of propaganda school. And if the zeitgeist invites students down this path of intolerance, then the school's administrators and faculty should put on their big boy and big girl pants and lay down the rules that govern the campus.

I have noted before that I think the right-wing critique of political correctness is overwrought and tendentious. But incidents like this at Middlebury illustrate there is a core of truth in the charge. The left needs to find a way to teach good manners without encouraging this bizarre campus culture that is more fascist than free.