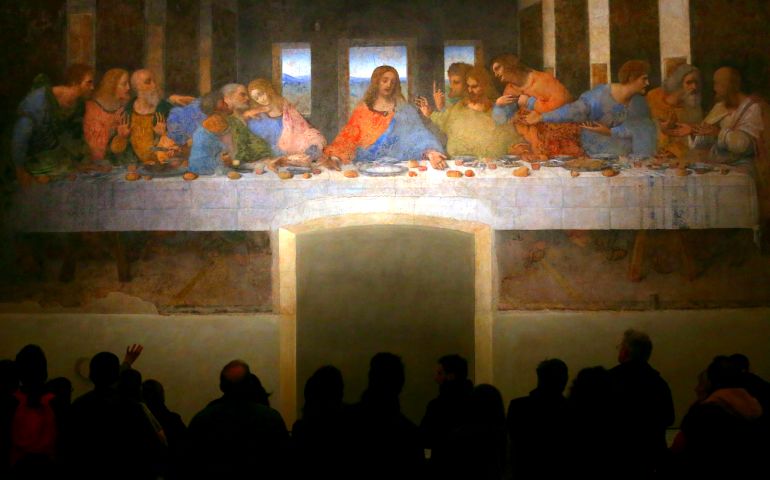 The liturgy of Holy Thursday focuses us on both the institution of the Eucharist and the great commandment to love one another.

In the canon of the Mass, the celebrant says, as he always does, "On the night he was betrayed," but tonight he adds "that is tonight." The sacrament of the Eucharist exists in history and beyond history, so tonight really is "the night he was betrayed." And, of course, the powerful imagery of the Mandatum rite, when the celebrant washes the feet of 12 disciples, draws us to reflect on the strange nature of Jesus' kingship, a nature so strange it can only be understood as divine.

Growing up, I was taught that the Last Supper was a Passover meal, though modern exegesis has pretty well established that it was not. But it is not a bad thing for young Christians to recognize the Jewishness of Jesus as our pretend seders led us to do.

Today, I wish to call our attention to another way that Jesus' Jewishness is manifest in Holy Thursday, the "high priestly prayer" recorded in the 17th chapter of Gospel of John. And that extended discourse points us to a different Jewish feast, Yom Kippur. In the second volume of his trilogy Jesus of Nazareth, Joseph Ratzinger, Pope Benedict XVI at the time but writing in his personal capacity as a theologian, devotes a chapter to the high priestly prayer. Following the work of Andre Feuillet, he notes, "The ritual of the feast [of Yom Kippur], with its rich theological content, is realized in Jesus' prayer — 'realized' in the literal sense: the rite is translated into the reality that it signifies. What had been represented in ritual acts now takes place in reality, and it takes place definitively."

The Day of Atonement that the Jewish people celebrate every year required the high priest to enter the Temple, to pronounce the holy name of God and to make atonement for himself, for the priestly clan of Israel and for the whole community. This atonement reconstitutes the covenant between God and his people, which had been broken by sin in the previous year.

"According to rabbinic theology, the idea of the covenant — the idea of establishing a holy people to be an interlocutor for God in union with him — is prior to the idea of the creation of the world and supplies its inner motive," writes Ratzinger. "The cosmos was created, not that there might be manifold things in heaven and earth, but that there might be a space for the 'covenant,' for the loving 'yes' between God and his human respondent. Each year the Feast of Atonement restores this harmony, this inner meaning of the world that is constantly disrupted by sin, and it therefore marks the high point of the liturgical year."

The high priestly prayer contains several key themes, but today I would like to focus on two of them, sanctification and unity, and relying on Ratzinger's insights. Jesus says, "Consecrate them in the truth. Your word is truth. … For their sake I consecrate myself, so that they also may be consecrated in truth." (John 17:17, 19) To sanctify or consecrate is to hand over something entirely to God which, perforce, entails separating the thing sanctified from our mundane reality. Sanctification is God's work, not ours, so whatever has been sanctified is touched by the divine in such a way that it stands apart. It is not hard to see how this can lead to misbegotten ideas such as the "heroic priesthood."

"The process of consecration, 'sanctification,' includes two apparently opposed, but in reality deeply conjoined, aspects," Ratzinger writes. "On the one hand, 'consecrating' as 'sanctifying' means setting apart from the rest of reality that pertains to man's ordinary everyday life. Something that is consecrated is raised into a new sphere that is no longer under human control. But this setting apart also includes the essential dynamic of 'existing for.' Precisely because it is entirely given over to God, this reality is now there for the world, for men, it speaks for them and exists for their healing. We may also say: setting apart and mission form a single whole." Here is the antidote to the clericalism observable in the "heroic priesthood" cant.

The second theme of the prayer that warrants our attention is the concept of unity. Jesus prays, "… so that they may all be one; even as you, Father, are in me, and I in you, that they also may be in us, so that the world may believe that you have sent me" (John 17:21). He repeats this plea for unity four times.

We repeat this prayer whenever we engage in ecumenical dialogues, and for obvious reason we do so even more when we engage in ecumenical prayer. "The world's own efforts lead to disunion, as we can all see. Inasmuch as the world is operative in the Church, in Christianity, it leads to schisms," observes Ratzinger. "Unity can only come from the Father through the Son. … Unity must be visible; it must be recognizable as something that does not exist elsewhere in the world; as something that is inexplicable on the basis of mankind's own efforts and that therefore makes visible the workings of a higher power."

In the early church, reflecting on this profound, repeated prayer for unity, Christians discovered the apostolic succession, the canon of Scripture and the "rule of faith" as foundational to such unity. To say, as some do, that these are "add-ons" is to miss the point: The seeds planted by Jesus grow and develop, as do all living things, but the unity of the church remains rooted in what Jesus planted.

In our own time, we have come to see ecumenical prayer as a given. Papal trips routinely include a prayer service with our Christian and even non-Christian religious leaders. Who can forget the beautiful vespers service at Westminster Abbey at which Pope Benedict and Archbishop of Canterbury Rowan Williams presided together? The Week of Prayer for Christian Unity is celebrated throughout the world with prayer services.

This is all a fruit of Vatican II, which was itself a fruit of the Holy Spirit. When you read biographies of the great Churchmen of the late 19th and early 20th century in this country, of Cardinal James Gibbons, and Archbishop John Ireland, and Bishop Denis O'Connell, you realize how often they clashed with Roman authorities because they participated in civic ceremonies at which they were asked to offer a prayer alongside a non-Catholic minister. Rome, then at its sectarian height, was horrified. They shouldn't have been.

On this Holy Thursday, in addition to being drawn into the emotional power of the washing of the feet in the Mandatum rite, in addition to acknowledging the deep gratitude for the institution of the Eucharist and the priesthood, I encourage everyone to meditate on the high priestly prayer of our Lord and to pose to yourself two questions. First, what can we do in the year ahead to sanctify ourselves for the world, and, second, what can we do to respond more fully to the Lord's call for Christian unity? We have come to the end of Lent with its penance and almsgiving and prayer. Now, as we celebrate the paschal mystery, let us ask what we can do to answer the Lord's plaintive high priestly prayer in Eastertide.

Are we saved by Jesus' death on the cross?