President Trump and the rule of law 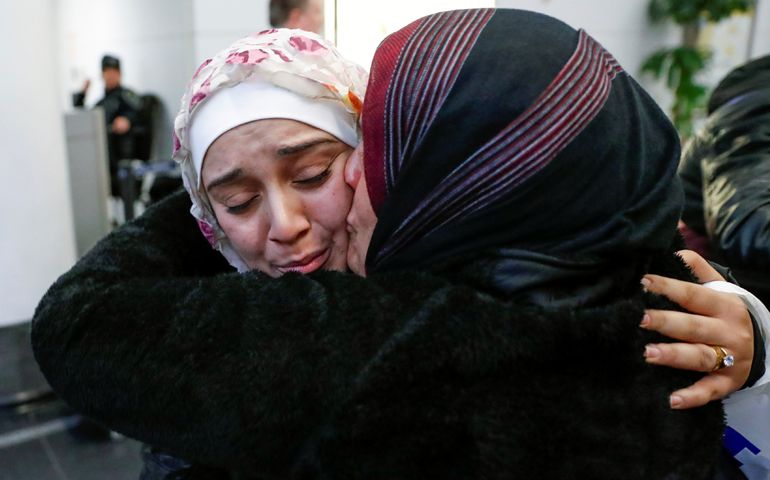 "See you in court!" President Donald J. Trump tweeted minutes after the 9th Circuit upheld a lower court decision putting a stay on his ban on refugees and immigrants from seven majority Muslim nations. One wonders where he thought they had been? "The security of our nation is at stake" the tweet added. In this, this president is correct but not for the reason he thinks.

SEE YOU IN COURT, THE SECURITY OF OUR NATION IS AT STAKE!

The ruling by the court would, in normal circumstances, be unremarkable. To have the stay overturned by the appeals court, the government needed to demonstrate two things: first, that it was likely to prevail when the courts finally reach a full examination of the case on the merits and, second, that continuance of the stay would cause "irreparable injury." On both fronts, the 9th Circuit unanimously held that the government had not made its case.

The court took particular exception to the government's argument that the president's executive order was "unreviewable." The court acknowledges that the judiciary owes "substantial deference" to the political branches in the administration of immigration and national security policy. Yet: "There is no precedent to support this claimed unreviewability, which runs contrary to fundamental structure of our constitutional democracy." And, there is the rub for Team Trump. They overreached and did so badly.

Another line that caught my eye had to do with the government's changing position on whether or not the executive order applied to legal permanent residents, i.e. green card holders. Amidst the initial chaos the order unleashed, the White House counsel, apparently unaware beforehand that green card holders most certainly do indeed have due process protections under the Fifth Amendment, issued an interpretation of the executive order claiming it did not, in fact, apply to legal permanent residents. The court noted that the White House counsel is not the president, and that the counsel's orders are not necessarily binding on other executive agencies, but then it made a crucial point: "Moreover, in light of the Government's shifting interpretations of the Executive Order, we cannot say that the current interpretation by White House counsel, even if authoritative and binding, will persist past the immediate stages of these proceedings." Translation: This White House does not have its act together.

To be clear, the court did not rule fully on the merits. It noted that the executive branch does enjoy broad powers to restrict immigration for national security reasons. President Trump and his spokesman Sean Spicer have repeatedly cited a statute that grants such broad powers. But, there are other statutes, including the Immigration and Nationality Act of 1965, which forbids discrimination against those seeking to migrate to the U.S. by reason of religion or nation of origin. One of the reasons we have courts is that sometimes different laws conflict with each other when it comes time to apply a particular policy. The courts resolve the difference.

The courts also determine whether or not a statute passes constitutional muster. In this case, the role of religion in the crafting of the executive order, indeed in the whole political rationale for the order, is obvious and Mr. Trump has no one to blame but himself. What is now called a "travel ban" began life as a "Muslim ban" and it is not "political" of the court to recognize the fact that as a candidate, Trump spoke about a ban on Muslims, not least because this executive order was one of a flurry of orders, all demonstrating his determination to keep his campaign promises. And, yes, if the intent is to bar Muslims, the order is unconstitutional.

Which leads us back to the worrying thing the president tweeted. I do not underrate the threat terrorism poses to the United States. Like most Americans, I remember exactly where I was and what I was doing when I saw that second plane fly into the South Tower on Sept. 11, 2001. The security of the nation, however, is also threatened by someone in executive authority for whom the phrase "rule of law" likely has no substantive meaning. Within his own business enterprises, Trump was king, and not even a constitutional monarch like Queen Elizabeth II, but an autocrat, like Ivan the Terrible. In the conduct of business, he became aware of the ability of others – employees, business associates, former partners – to haul him into court, but it is clear from his own commentary on those proceedings that he had a Clausewitzian approach to the law: It was the continuation of business dealings by other means. We should all be very scared at how he will react should he eventually lose in the courts on the merits.

We should also be worried at the way Trump is setting up our nation's judiciary to take the fall the next time there is a terrorist attack. In the passion of such a moment, people will tend to overlook inconvenient facts (especially when there are "alternative facts" being pedaled) such as the actual nation of origin of the attacker, the fact that the attacker probably had no more in common with a five-year-old Syrian refugee than with me, the fact that Trump's order doesn't extend to countries from which terrorists have actually come to the U.S. but which the president had had business dealings. All that will be forgotten in the heat of the moment and when the president, who puts the "bully" into "bully pulpit" like no one ever has, gets out his Twitter feed and types "9th Circuit: I told you so." Undermining the fabric of our constitutional system is what putative dictators do and we are all fools not to notice that Trump is perfectly willing to so undermine our constitution if it suits his political purposes.

We should also be worried by the fact that several polls indicate President Trump's ban on refugees and immigrants enjoys widespread popular support. Steve Bannon has surely pointed this out to his protégé and reminded him that this is the issue that gins up his base. At a time when his overall approval numbers hover in the low 40s, the Muslim ban is garnering a slight majority of support. This is worrying first because of the lesson Trump will take away from it: repealing Obamacare, defenestrating environmental regulations, Wall Street cronyism, all these may not be winners for the president, but nativism sells.

This should especially worry our nation's bishops. Had they been focusing more on immigration and less on contraception these past few years, perhaps Catholic voters would be more resistant to Trump's nativist rhetoric. If the Catholic church had spent as much time teaching its social doctrine as its sexual doctrine, Catholics in the pews would not be so well represented among that majority support for the Muslim ban. Thankfully, most of the leaders of the Catholic church in this country have been outspoken in recent weeks in denouncing the president's executive orders regarding immigration, not only the Muslim ban, but the pledge to build a wall along our southern border and to increase the deportation police too. They need to keep at it and keep at it for a couple of decades if the Catholic electorate is to cease displaying views that could be characterized, to borrow a phrase from George Weigel, as "Catholic Lite."

The next few days and weeks will be a bit scary. No one really knows how Trump will respond to such a thorough rebuke. This is not someone who exhibits much respect for, nor knowledge of, constitutional procedures and values, or even much nous about governance. But, he likes to watch the polls and we can look for him to stoke the nativist animus that continues to poll better for him than anything else and which, sadly, brought him this far. Yesterday's ruling was great for refugees and immigrants waiting for flights at airports around the world. But, it was also a good day for Steve Bannon.

President Trump and the rule of law