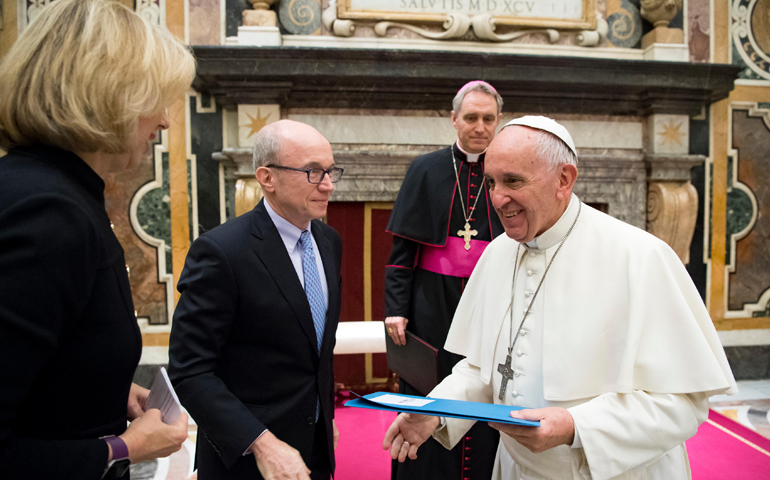 Last night, at a Liturgy of the Word service at Chicago's Holy Name Cathedral, to give thanks for the honor conferred upon him in being named to the College of Cardinals, Cardinal Blase Cupich spoke about leadership. "A good place to start is for all of us who are given the high ground of leadership to speak and act in a way that gives people the hope to tap into the creative resources God continually gives us, to speak and act in a way that moves us forward together because we are on the same journey and to speak and act with great care because our children are watching us," the new cardinal told the interfaith gathering. In the context of his talk, Cupich was not drawing a contrast with our next president, but the comparison is worth noting.

Cardinal Cupich also quoted from remarks the Holy Father had given to participants in the Fortune-Time Global Forum, which took place in Rome last week. The Holy Father said, "What is required now is not a new social compact in the abstract, but concrete ideas and decisive action which will benefit all people and which will begin to respond to the pressing issues of our day." The Global Forum was a kind of "Davos goes to the Vatican" event, which strikes one as strange: Pope Francis is the most prominent critic of the neo-liberal order that has made these titans of the business world very wealthy. Alas, even they must recognize that the neo-liberal order is coming apart at the seams.

Italian Prime Minister Matteo Renzi is the latest establishment politician to lose his scalp to populist forces, resigning last night after his proposed constitutional reforms were decisively defeated at the polls. Earlier this year, normally phlegmatic Brits voted to leave the European Union. Austria dodged a bullet, turning back an attempt by a far-right politician to gain that country's presidency. Polish voters elected their most right-wing government since the collapse of communism. Throughout the West, neo-liberal governments have not been able to deliver the kind of responsive government, nor the widespread prosperity, that people demand.

I share all of Pope Francis' criticisms of neo-liberalism. (And I have a few of my own too!) But, as one participant in the Global Forum told me, "At least neo-liberalism is liberal. It aimed at a moral ideal. What will replace it might be very dark and dangerous." The seeds of neo-liberalism's destruction were self-contained, to be sure: It has a faulty anthropology, an unjustified faith in markets, and a naïve belief that democracy's benefits were so self-evident, and the memory of their alternatives so searing, no one would challenge them. They were wrong.

President Barack Obama was the face of enlightened neo-liberalism in the U.S. the past eight years. The president's moral vision is different from mine. Like most political progressives, Obama allows the quest for equality to steamroll over other important social goods and he is wedded to a liberationist understanding of social progress that repeatedly minimized the importance of bad economic conditions in large swaths of both rural and urban America in favor of celebrating the removal of restraints against minorities. I am all for removing restraints against minorities, but as I have noted before, the president lit the White House in the colors of the rainbow flag when the Supreme Court legalized same-sex marriage and I can't recall him doing anything similar for working-class white folk. Certainly, he never thought to shame a large corporation into keeping jobs here in America.

My differences with Obama notwithstanding, I acknowledge that he took seriously his obligation to provide moral leadership for the country and the related obligation of the United States to exercise leadership in the world. When a crisis erupted or a difficult choice faced him, like most politicians, I am sure he calculated the political consequences of the available options, but he tried to do the right thing. I might disagree with what he thought was the "right thing" but I never concluded that the president was simply acting in an amoral manner.

Next month, Obama will turn over the White House to someone who has never evidenced any sense that he thinks it necessary to make decisions based on anything other than what is in it for him. Journalists will be wrestling for the next four years not with an analysis of the possibilities and the pitfalls of Obama's liberal morals, but with the decision to describe Trump as amoral or immoral.

We all remember the riots in Ferguson, Mo., after the killing of Michael Brown. Some on the left saw the event as evidence of ongoing, structural racism. Some on the right saw it as the justifiable action of a police officer in a fraught situation. Trump would look at a similar situation and see a political opportunity. And that is scary. There will now be public, indeed international, consequences to this man's narcissism.

The prophet Isaiah had something to tell us about leadership yesterday:

Not by appearance shall he judge,

nor by hearsay shall he decide,

but he shall judge the poor with justice,

and decide aright for the land's afflicted.

Trump is all about appearances and hearsay, otherwise he would not have Steve Bannon whispering into his ear. It is ridiculous to think he will make decisions "for the land's afflicted" when it is so much easier to stoke their resentments. And Trump does not appear to be the kind of person who thinks overmuch about the demands of justice.

Time marches on. The work of neo-liberalism is a salvage operation. Populist, right-wing demagogues propose a dark alternative vision. Who but Pope Francis offers a different path forward, one that truly earns the designation "enlightened"? It is time for the bishops around the world, and especially in the United States, to think through these challenges deeply, and to decide if they will work with Francis to craft a new kind of leadership or if they will ally themselves with the dark forces of rightwing populism, hoping to get some crumbs from the table on this issue or that. The choice should be easy, but the work ahead is hard: "What should come next?" is never an easy question to answer. The advent of Trump, and similar movements throughout the West, now make that question inescapable.