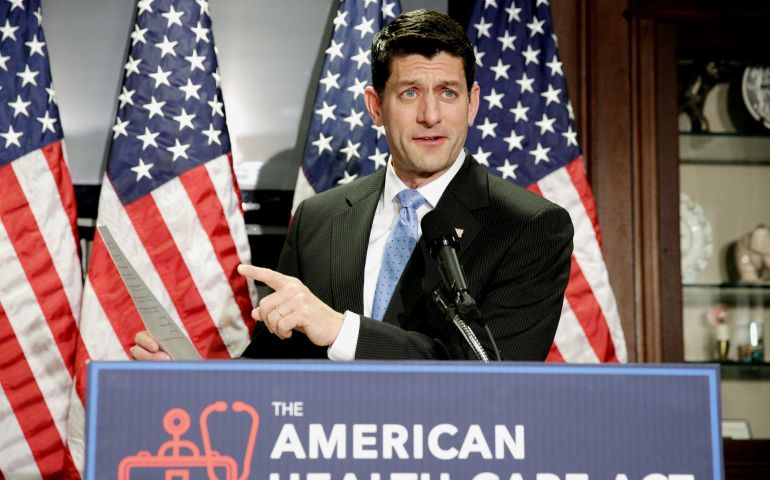 There is much that was morally objectionable in the first GOP proposals to repeal and replace the Affordable Care Act. And, with House Speaker Paul Ryan seeking to cobble together the votes to pass the legislation, the proposal is getting worse and worse as conservatives insist the bill become more draconian, not less.

One of the biggest changes the GOP proposes is to turn Medicaid, the program that provides health insurance to the poor and working poor, into a block grant for the states. They are calling it a "per capita cap" but that amounts to the same thing and it will harm the poor.

"The problem with block grants in general is that the funding for the programs will not fluctuate with the circumstances," explains Eric Mitchell, director of government relations at Bread for the World, a Christian advocacy organization that focuses on ending hunger. "We saw this during the last recession in 2008. SNAP [Supplemental Nutrition Assistance Program or 'food stamps'] was not block-granted. It was able to kick in during the recession to help keep people from going hungry. As the economy recovered, the need declined and so did the funding."

Mitchell notes that Temporary Assistance for Needy Families (TANF) was block-granted during the recession. Consequently, its funding did not rise as poverty rose, but SNAP funding was able to rise, and therefore keep pace with the increased need caused by the economic downturn. This graphic from a Bread for the World release illustrates the difference: 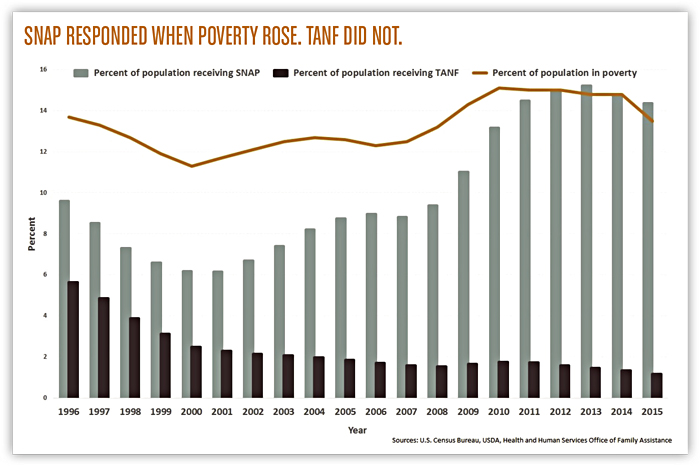 (Courtesy of Bread for the World)

Bread for the World is part of the Circle of Protection, an alliance of religious groups that seeks to protect funding for anti-poverty programs. They succeeded in getting those programs exempted from the sequestration process during the Obama administration. Last year, the group convinced Ryan not to pursue a block grant approach to SNAP.

Now, Ryan is planning to block-grant Medicaid, with potentially catastrophic effects on the poor. In addition to the concerns raised by Mitchell, there is the concern that states will act in an irresponsible manner. I am all for subsidiarity, devolving decision-making and governmental responsibility away from Washington, but some states will not prioritize helping the poor and we, as a society, should not punish the poor for being poor by denying them access to health care. Subsidiarity is a way of organizing solidarity, as Professor Stephen Schneck has pointed out, not abandoning solidarity.

Medicaid is one of our nation's core entitlement programs. That word — entitlement — has acquired a negative connotation. In the context of national economic policy, those who worry about the size of the federal budget deficit view the entitlement programs as the largest target for budget cuts, seeing as Social Security, Medicare and Medicaid account for about half of all federal spending. "We can't afford it," we are told.

There are several responses to this that the Democrats should voice. The first is the most basic and, oddly, the least frequently mentioned: Of course, we can afford it. We live in the richest nation in the history of the world. Those who want to make you believe we live in a time of scarcity are peddling nonsense, but nonsense with a purpose: There is a kind of politics that flows from the premise that our resources are scarce, and top of the agenda for that politics is to keep taxes low for the uber-rich. I have previously called attention to a piece by Richard Trumka, president of the AFL-CIO, published here at NCR, that made the point better than anyone.

Secondly, and specifically in the context of health care programs, if every other developed country in the world manages to afford health care for its citizens, why is it only we Americans who can't afford it? As long as we subject heath care, which is not a commodity the way a washing machine is a commodity, to the vagaries of the market, its cost will skyrocket, health care resources will not reach the people who need them but only those who can afford them, and the mix of public and private delivery of health insurance will create a labyrinthine mess for patients, especially the poor.

"The Bishops have serious concerns about structural changes to Medicaid that would leave large numbers of people at risk of losing access to health care or that lack adequate safeguards and accountability at the state level," read a letter that the U.S. Conference of Catholic Bishops sent to all members of Congress. "Innovation for the good of all is welcomed and encouraged, but adjustments to essential parts of the social safety net require a higher bar of certainty and concern to protect the millions of people, including many children, who have a claim on our national conscience."

And, in fact, there are many ways states can pursue innovation in the delivery of health services under current law and without block grants.

There is an easy way to avoid block grants, and some of the other pernicious proposals in the GOP plan: Leave the taxes enacted by the Affordable Care Act in place. Those taxes fell almost exclusively on the top 1 percent of income earnings. Those people are doing just fine. The only reason the GOP is scrambling for savings is because they insist on repealing those taxes. This is the choice: tax cuts for the rich or health care for the poor? For Catholics, that is not a tough choice.

Politics | Proposed change to Medicaid will harm the poor

Bishops discuss hotline devoted to collecting complaints against them