The reality of the Resurrection 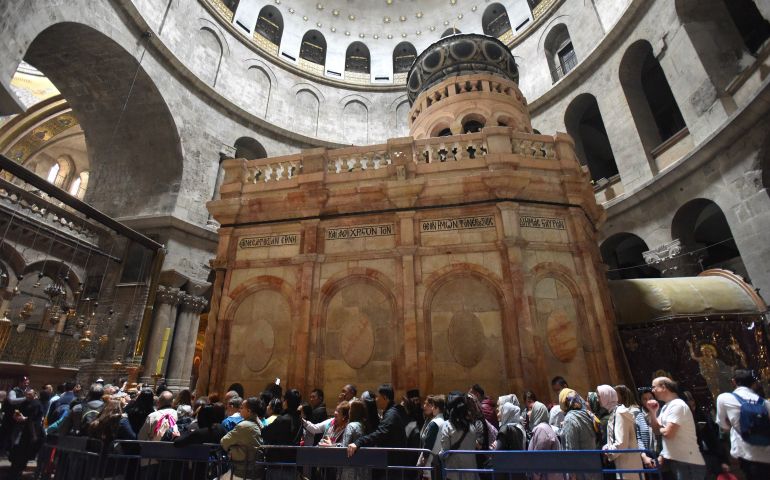 People wait to enter the Edicule, the traditional site of Jesus' burial and resurrection, March 23 at the Church of the Holy Sepulcher in Jerusalem. (CNS/Debbie Hill)

Christ is risen! He is risen indeed!

In modern times, some have questioned the facticity of the resurrection of Jesus. The scientific method cannot assess an event that transcends history. Historical-critical readings of the Gospel texts note that the accounts differ in their particulars, which raises doubts in some people's minds about whether this really happened: Did Jesus appear first to the women or to Peter? Luke is at pains to emphasize Jesus' post-resurrection bodiliness, noting that he ate some fish. Mark's Gospel ends on an abrupt note.

It is not uncommon for two or more people to recall the same event differently. And, in this case, the thing being recalled was otherworldly in a way that has challenged artists and writers through the centuries. None of the witnesses had ever encountered, or even imagined, a person who had been raised from the dead to new life. Indeed, the discrepancies in details likely attest to the veracity of the main event itself: If the disciples of Jesus had fabricated the whole thing, surely they would have gotten their story straight!

Yet we moderns treasure our skepticism, which is not a bad thing in most instances, unless it becomes oppressive. What is funny is that the things the modern mind grabs onto by way of explanation are often, on second glance, ridiculous.

In his wonderful gem of a book, God at the Ritz, the late Msgr. Lorenzo Albacete wrote about holding fast to the faith in a busy, consumerist and aggressively secular culture. Every Easter, I turn to these paragraphs for what they say about the foundation of our Catholic faith:

What interests me here is this woman's question — is the "resurrection of the body" a metaphor? — and the suggestion that, as a metaphor, that resurrection somehow corresponds to our experience of what is possible. My immediate reaction to the question was to think about — and to notice and feel — my own body, which could be diplomatically said to have reached threatening dimensions [the monsignor was greatly overweight]. I remembered how, when I try to get up in the morning, I discover parts of my body (because they hurt) that I didn't even know were there. So in response to this question about resurrection-of-the-body as metaphor, I replied, "My experience of the body is not the experience of a metaphor. The day this baby becomes a metaphor, I'll be better equipped to answer your question."

This wasn't exactly St. Paul's argument for the possibility of a bodily resurrection, but my questioner understood what I meant. (I could tell because she laughed uncontrollably.) I mean, this was in southern California, where you see many bodies that make you think of the resurrection as a worthwhile thing, as a metaphor for their beauty and attraction. But, alas, farther away from Hollywood, this is not always the case. What I would like it to mean, what my heart wants, is the real possibility of having a body like those who at that very moment could be seen around the pool during the shooting of an episode of some television series. I have no idea what my risen body might be like, but if such a thing does exist, I want it to be closer to the bodies at the pool than to a metaphor.

Recently, the shrine in the Church of the Holy Sepulcher in Jerusalem that contains the tomb of Jesus was restored. I am told that the scientists' modern equipment, used to measure the age of rocks and such things, stopped working in the tomb. In itself, that proves nothing, but how could it prove the Resurrection? Like the first disciples, we still grapple with what happened, try to make sense of it, experience that strange mixture of recognizing and not recognizing the risen Jesus in our midst. But, in faith, we can confess that Jesus is risen, that the verdict rendered by the world on Good Friday was not the last word on Jesus, that his teachings and his person, which stood condemned, have been vindicated by God, and vindicated definitively.

When I visit my parents' grave and contemplate the fact that one day my body shall be placed alongside theirs, I feel no awkwardness about my confidence that my body will not rest there forever. In a life filled with grace, surely the greatest is that I have never really doubted that the tomb of Jesus was empty and, in his resurrection, there is hope of eternal life for us all.

Spirituality | The reality of the Resurrection

A prayer for Ukraine (and the world)

Reflections on Eastertides and plastic bottles

How to celebrate a creation-conscious Easter