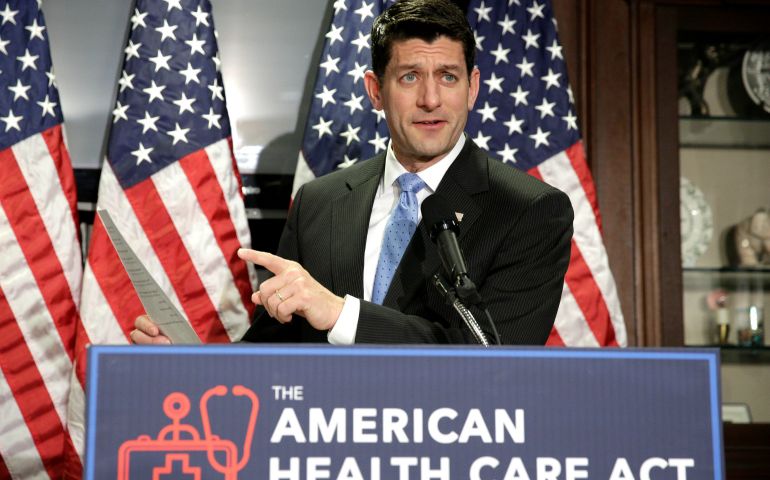 Whenever the bishops offer a document on public policy, you can almost always find reference to the core principle of human dignity, upon which the entire edifice of Catholic social doctrine is built. And, in such a document, you will almost always find a qualifying phrase: Policy decisions must especially care for "the poor and the vulnerable."

The United States Conference of Catholic Bishops sent a letter to all members of Congress last week on the subject of health care reform. And, sure enough, under item No. 5, we find this sentence: "Limited access to minimal health care, particularly for poor and vulnerable people, including the undocumented, is not enough." Regrettably, having cited this primary moral concern, the bishops did not go on to officially oppose the legislation. More on the bishops' statement tomorrow.

There have been various analyses of the House Republicans' plan to repeal and replace the Patient Protection and Affordable Care Act. In this Associated Press analysis, Ricardo Alonso-Zaldivar compares the Republicans' bill with the Affordable Care Act, and it is clear that there are two shifts in the GOP proposals that run directly counter to the church's moral commitment to the poor and the vulnerable. The GOP bill will shift the cost of coverage from the young to the elderly, and it will result in the poor paying more and the rich paying less. And, according to the Congressional Budget Office's analysis of the plan, 24 million Americans will lose their insurance in the next decade if the Republican proposals are implemented.

Republicans have a hard time reforming insurance programs which are, in their very nature, redistributive. We all pay insurance on our houses that have not burned, so the insurance company can deliver our money to the people whose house did burn. And, in a society in which income inequality is as bad as it is, and in which wealth inequality is even worse, redistribution should always flow, from a moral perspective, in the direction of the poor and the vulnerable. Especially when what is being covered is something as essential to human dignity as basic health care.

Alas, the GOP's libertarian instincts have kicked in, and the word they keep repeating in defense of this deeply flawed plan is "choice." That is, for them, the moral objective, and in America the invocation of choice is often a winning argument. But the poor can't "choose" something they can't afford, and the GOP's bill plans to restrict the expansion of Medicaid leaves more than 10 million working poor people in the lurch. Substituting the Affordable Care Act's subsidies with refundable tax credits that go to everyone, while repealing the taxes on the top 1 percent that helped fund the Affordable Care Act's provisions, will further dry up resources needed to make the health care system work for the poor.

The GOP's plan to fundamentally restructure Medicaid is also problematic. This is about more than only the 11 or so million who have been added to the Medicaid rolls under the terms of the Affordable Care Act. The GOP plans to eventually turn Medicaid into a block grant for the states. I am not, per se, opposed to the idea that the states should be more involved in the delivery of government services. We Catholics hold to the idea of subsidiarity, the belief that political decisions should be made at the lowest level of social structure possible and the highest level necessary. In the abstract, I see no reason federal taxes and spending should not go down while state taxes and spending go up. But subsidiarity is not a principle that stands alone. It is a way of structuring solidarity, another core principle of Catholic social doctrine.

In practice, some states will shirk their moral responsibility to the poor and, as in the GOP provision to allow the purchase of insurance across state lines, the GOP plan is inviting a race to the bottom. This is not a structuring of solidarity but a recipe for abandoning solidarity. Astute readers will note also that the GOP's concern to empower states by turning Medicaid into black grants is vitiated by the GOP's proposal to gut state health insurance regulators of all authority by permitting the purchase of plans across state lines. This race to the bottom will not happen overnight, and it won't happen before the next election, but it will happen.

The Washington Post had a good analysis of the changes to Medicaid in yesterday's edition. "Medicaid is probably 50 times more complicated and controversial" than the Affordable Care Act's insurance marketplaces, said Tom Scully, administrator of the Centers for Medicare and Medicaid Services under President George W. Bush. "It's way more money, it affects far more people, it's more about state-to-state spending and not just partisan politics." Indeed, one of the odd, and hopeful, political realities facing the House GOP leadership is that so much of the early opposition comes from within the Republican ranks, and it comes from both sides, with conservatives wanting a more draconian bill and moderates urging caution. There is no way to reconcile those two desires.

Those who care about the poor and the vulnerable should oppose this law, but that can't be the end of the story. As a wise friend said to me, "Obstruction is not a good color for the Democrats." They need to use this opportunity to reframe the debate in fundamental ways. An example: Democrats should point out, every time they discuss health care reform, that health care is not a commodity like other commodities and should not be treated as such. It is a human right and a societal responsibility. The only system that has ever been conceived that takes sufficient account of that responsibility is some variation on a single-payer system, and Democrats should be laying the groundwork for a "Medicare for everyone" proposal when they are next in the majority.

Tomorrow, I will look at the response of church leaders to these proposals.

People | Republican health care proposal, it's not about human dignity

Millions of those previously uninsured now have some kind of coverage