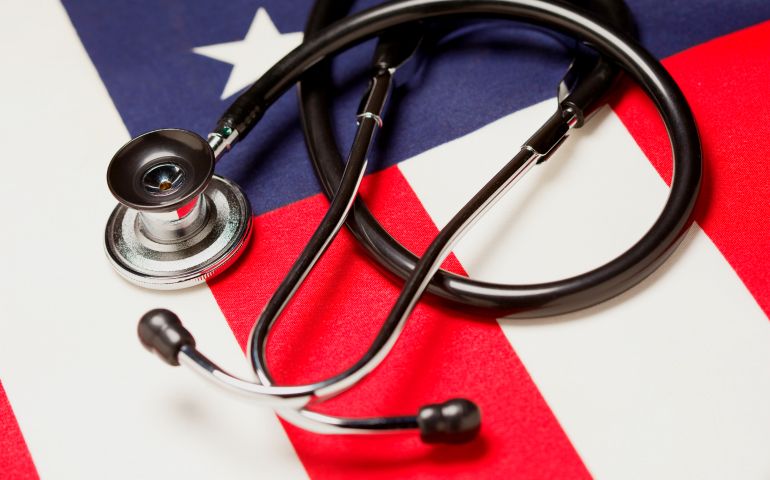 The effort to repeal and replace the Affordable Care Act, aka Obamacare, is back. A little more than a month after Speaker Paul Ryan pulled a previous bill because he lacked the votes to pass it, Ryan is trying to push a revised bill through the House of Representatives. [Update: The House passed the revised bill the afternoon of May 4 with a four-vote margin. The final vote was 217-213.]

The revisions actually make the bill worse from the perspective of Catholic social doctrine. That doctrine has long insisted that health care is a basic human right, and the new bill does nothing to lessen the predicted number of people who will likely lose coverage under the bill: The Congressional Budget Office estimates that 24 million Americans will lose coverage in the next 10 years if the new bill is enacted into law.

As I wrote during the debate in March, this loss of health care coverage for so many was Daughter of Charity Sr. Carol Keehan's principal objection to the bill. "I have to say right up front, that my biggest concern is those people who never had insurance before, but who now have it," Keehan, president of Catholic Health Association, said at the time. "It may not be the best insurance but it is something. You don't just wipe these people off the rolls."

The U.S. Conference of Catholic Bishops, not known for its love for the Affordable Care Act, has forcefully called for changes to the current proposal. "It is deeply disappointing to many Americans that, in modifying the American Health Care Act to again attempt a vote, proponents of the bill left in place its serious flaws, including unacceptable modifications to Medicaid that will endanger coverage and affordability for millions of people, according to reports," Bishop Frank Dewane of Venice, Florida, said in a statement at the conference's website. "Sadly, some of the recently proposed amendments — especially those designed to give states flexibility — lack apparent safeguards to ensure quality of care. These additions could severely impact many people with pre-existing conditions while risking for others the loss of access to various essential coverages."

The changes to the previous bill are, as Dewane notes, designed to give states flexibility. At least, that is the stated and ultimate policy rationale. But the proximate and political cause for the changes is that Ryan needs to appease the Freedom Caucus, the 30 or so exceedingly conservative Republican members of Congress whose refusal to back the previous bill caused it to fail.

The Freedom Caucus had developed a fetish about anything that smacks of a mandate, whether requiring coverage of basic services or the individual mandate to procure coverage. Its members thought they could kill two birds with one stone by letting the states decide what basic coverage they wanted and abolishing the mandate.

But that opens a Pandora's box of problems because of other features in the bill and because, without the individual mandate, insurance companies are resistant to covering people with pre-existing conditions: A person could forego coverage until they got sick, and then apply for insurance only as needed.

In its rush to find more things to detest about Obamacare, the Freedom Caucus took aim at the basic coverage requirements set by the federal Department of Health and Human Services. "Big government" they complained, was making elderly people get coverage for maternity care that they no longer needed. Well, yes, because young people had coverage for angina they were unlikely to get anytime soon. Again, that is how insurance works. The caucus' solution was to let states set the basic coverage requirements, or not, as they saw fit.

The Center for American Progress published a study May 2 about how this change will, over time, defeat the highly popular provision of Obamacare that prevents insurance companies from denying coverage to people with pre-existing conditions.

It is complicated, but the people immediately affected would be those with a gap in coverage at some point. If you lose your job and the health insurance that comes with it, and it takes you awhile to procure new coverage, the insurance companies can raise your rates and can charge more if you have a pre-existing condition. The GOP proposal would also have an effect on the subsidies currently available under the Affordable Care Act. And when Republicans propose high-risk pools as a solution, the Center for American Progress study shows that they are no solution at all.

Standing back of both the politics and the policy discussions on the Hill is our president. Charitably, we could say that he is not known for his policy expertise in this area. But he knows that if he were to eliminate the ban on insurance companies denying coverage due to pre-existing conditions, his popularity would come crashing down. Say what you want about the man's deficits, but he is not an ideologue like the members of the Freedom Caucus.

The problem with the president is different. First, his own staff, to say nothing of Ryan, have to always be concerned that Donald Trump will "learn" something from a Fox News commentator that he then repeats as true even if it is demonstrably false. That is what happened when he charged President Barack Obama with wiretapping Trump Tower.

Second, while we have had presidents who were not the brightest bulbs, such as Warren Harding, it has been a while, and it has been a very long while, since we have had a president so unsure about what he doesn't know. All presidents rely on advice, but most presidents know enough to ask tough questions. It is not so much that no one who works for Trump is willing to tell him that the emperor has no policy clothes. It is that he does not care a whit if he is naked. How does staff, and how do congressional leaders, deal with that?

The president knows he needs a legislative victory and soon. Ryan knows this also. But so long as they are beholden to the Freedom Caucus for the necessary votes, the bill will keep getting worse and worse and, at the end of the day, people's lives will be affected.

If the prospect of 24 million people losing their health coverage did not scare Trump and Ryan the first time, what will it take this time?

'Do not trust in princes': the limits of politics