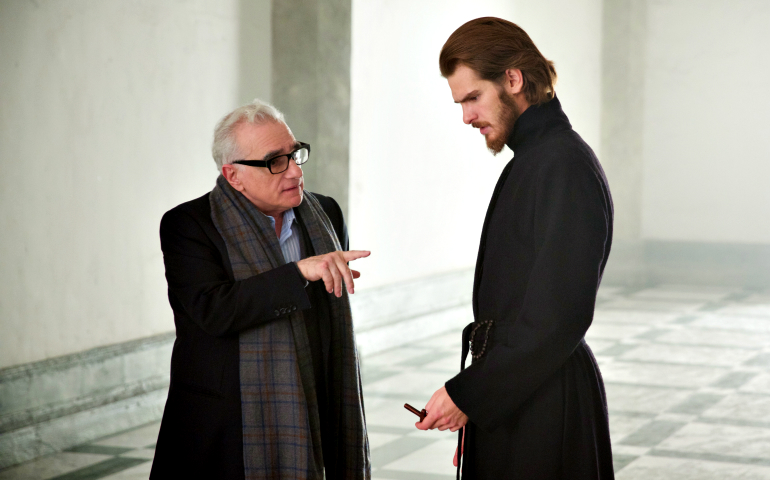 Tomorrow, Martin Scorsese's movie “Silence” opens at select theaters. ’s unsurpassable movie critic Sr. Rose Pacette has seen the movie and her very favorable review of it can be read here. I have not seen it, but I wish to call attention to a remarkable interview Scorsese gave to Jesuit Fr. Antonio Spadaro, which is posted at Civilta Cattolica, and to comment on some of what Scorsese has to say.

Americans imagine Hollywood as a place of debauchery and shallowness, but this interview reveals Scorsese’s mind to be rich, culturally fluent, even profound. When asked if he is obsessed with the spiritual, he replies, “There’s something that Marilynne Robinson wrote in her book Absence of Mind that gets right to the heart of this question for me: 'The givens of our nature — that we are brilliantly creative and as brilliantly destructive, for example — persist as facts to be dealt with even if the word "primate" were taken to describe us exhaustively.' Of course she’s right. The idea that everything can be scientifically explained doesn’t seem ridiculous to me, but actually quite naïve.” Naïve. This is an insight into the increasingly evident childishness of much contemporary thought that has escaped many academics. The artist, of course, perceives the truth of things through a different lens.

Spadaro asks the director about his image of God, noting that Pope Francis wishes to rid the church of the idea that God is a torturer. Scorsese refers in his answer to Bernanos’ Diary of a Country Priest, saying, in part:

It was an extremely dramatic moment in the country, of course. Vietnam was escalating, and it had just been declared a "holy war." So for me and for many others, there was a lot of confusion and doubt and sadness that was just there, part of the reality of day to day life. It was at that time that I saw Bresson’s film of "Diary of a Country Priest," and it gave me hope. Every character in that picture, with the possible exception of the older priest, is suffering. Every character is feeling punished and most of them are inflicting punishment on each other. And at one point, the priest has an exchange with one of his parishioners, and he says to her: "God is not a torturer. He just wants us to be merciful with ourselves." And that opened something up for me. That was the key. Because even though we feel that God is punishing and torturing us, if we’re able to give ourselves the time and space to reflect on it, we realize that we’re the ones doing the torturing, and we’re the ones we have to be merciful with.

He goes on to note how this reality of people torturing each other and themselves was the key to the story in his movie “Raging Bull.” And he recalls a priest from his childhood who sounds a lot like the kind of priest Pope Francis wants to see tending to the faithful in the field hospital: “This man was a real guide. He could talk tough, but he never actually forced you to do anything — he guided you. Advised you. Cajoled you. He had such extraordinary love.”

Spadaro asks Scorsese about the violence in his films, and this provokes what is for me the most fascinating reply. The director says, in part:

Well, to refer to your earlier question, I am obsessed by the spiritual. I’m obsessed by the question of what we are. And that means looking at us closely, the good and the bad. Can we nurture the good so that at some future point in the evolution of mankind, violence will, possibly, cease to exist? But right now, violence is here. It’s something that we do. It’s important to show that. So that one doesn’t make the mistake of thinking that violence is something that others do — that "violent people" do. "I could never do that, of course." Well, actually, you could. We can’t deny it. So there are people who are shocked by their own violence, or thrilled by it. It’s a real form of expression, under desperate circumstances, and it’s not funny. Some people say that Good Fellas is funny. The people are funny, the violence isn’t.

Scorsese displays a keen awareness of human nature here, the way people think violence is only something others do, that they could never do such things, when, of course, they could do such things. It is, to use his phrase, “a form of expression, under desperate circumstances” to which any of us could become prone if we were desperate. And Scorsese sees all this as intrinsically related to the spiritual, and conveys the connection in his films.

Which is how Scorsese helped me prepare for Christmas this year. We do not know much about the circumstances of Jesus’ birth, but we know that he, like most of humanity through most of history, was born into poverty, which is a kind of violence. Jesus took on human nature, with its pride and its gluttony and its malice, all forms of violence.

This year, the most unmovable fact of human nature, death, came to my family when my father died in October. His death was peaceful, but the breaking asunder of a relationship upon which I depended for my own sense of well-being, and had depended all of my life, that was an experience of violence. This year, more than any in the past, I feel the need of grace and I know that the grace I need is like the grace of Christmas, which, as Dietrich Bonhoeffer observed, demonstrates that we are "completely dependent on the fact that the door of freedom has to be opened from the outside."

Actually, my desire, my need, is not like the grace of Christmas, it is the grace of Christmas. The baubles can wait for another year. This year, no tree, no lights, just waiting for the Son of Justice, the messenger of the Father’s mercy, to break forth, to bring grace amid the violence.

“What does it matter? Grace is everywhere,” says the dying priest at the end of Diary of a Country Priest. Such an insight is vouchsafed only to the mystic and the very holy. For the rest of us, we search for grace amid the violence and the happinesses of life.  Scorsese turns that search into movies. I am not a movie buff. I would not have read this interview unless a friend had strongly recommended it. But, the funny thing is, no matter how hard we search, the arrival of grace is always a surprise. A great, stupendous surprise, a bit of Christmas, no matter when or where grace breaks through. I wish you all, the readers, a blessed Christmas and a New Year filled with surprising grace.